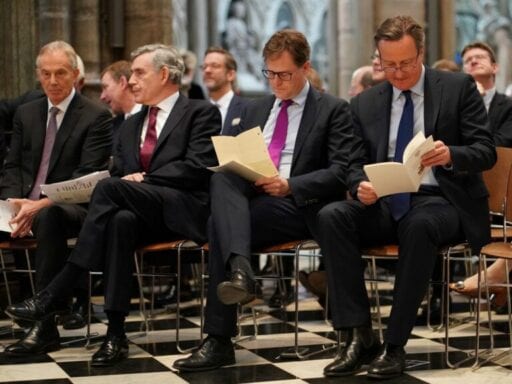 A 2011 law undid the core logic of parliamentary government.

Fans of parliamentary government have long touted the notion that the British political system could — at least in theory — never get deadlocked in quite the same way as the American system, in which executive and legislative deadlock has become something of a signature feature.

But this week, the story looks different, as the United Kingdom is currently bogged down in an intractable deadlock between the executive and legislative branches of government over how to approach the looming deadline for Brexit.

First, former Prime Minister Theresa May was unable to secure a parliamentary majority for her preferred approach to Brexit, which led to her resignation and replacement by current Prime Minister Boris Johnson.

But Johnson can no more secure a majority for his approach than May could, and his determination to try to push forward anyway has generated a week of political crisis. He decided to “prorogue” — that is, temporarily suspend — Parliament for a few weeks in order to shrink the time it had to come up with legislation to thwart his plans. But that prompted a member of his own Conservative Party to defect to the centrist Liberal Democrats, costing Johnson his already minuscule parliamentary majority.

Then enough Conservative MPs joined with the opposition parties to take control of the parliamentary agenda from Johnson, setting them up to pass a bill that would explicitly constrain him on Brexit. Johnson, in an effort to get the MPs in line, wants to hold a fresh election that he thinks will give him a majority of like-minded parliamentarians.

But at the moment, it looks like he’s not going to get what he wants and Parliament is going to pass measures over his opposition.

It’s something that looks much more like an American-style “separation of powers” system than the traditional British fusion of power. The American system has fewer wild swings in policy trajectory but also makes the total breakdown of the political system that is possible in the US common. It’s something that is inconceivable in Latin American countries or under a Westminster-style Parliament — at least in theory.

The UK’s problem today is the consequence of a 2011 law that was passed to address a particular set of circumstances, but has turned out to have wide-ranging implications for a variety of situations — including introducing the novelty of deadlocks into a system that is not accustomed to them.

Britain’s eight-word constitution and how it constructs its government, explained

But an old quip has it that you can sum up the whole thing with eight simple words: “What the Queen-in-Parliament enacts is law.”

Over time, however, the Lords were stripped of almost all their real power and a new tradition developed in which the queen would act exclusively on the advice of her prime minister. The prime minister, however, is elected by the House of Commons rather than directly by the voters.

All powers, in other words, are effectively held by the parliamentary majority party.

Members of the majority party are rarely if ever unanimous in their views, but as party leader, the prime minister can kick them out of the party if they won’t do what he wants. (Johnson says this will happen to the members of his Conservative Party who defied him.) And, more importantly, traditionally the prime minister can dissolve Parliament and call a new election (or, formally speaking, “advise” the queen to do this).

In other words, it’s not a dictatorship where the PM can just do whatever. Mass opinion, the opinion of the members of Parliament, and the interplay between the two play a critical role in shaping outcomes. But you never have a standoff — either the PM gets what they want or there’s a new election, which they either win or lose.

Implicitly underlying this, however, was the presumption that the UK’s election system would deliver something approximating two-party politics with strong majorities. But then everything started to change.

The UK uses a “first past the post” electoral system just like the United States. This means that whichever candidate in a race gets the most votes wins the seat. As a result, third-party votes are mostly “wasted” and for a long time created a strong incentive not to do them.

But after the 2010 general election, a confluence of global trends and specific circumstances — in particular, the Great Recession of 2008 and Prime Minister Tony Blair’s support for the Iraq War — led to a surge in votes for both the Liberal Democrats (an economically centrist, pro-European party that opposed the war) and a range of small regional parties. No party had a majority in Parliament.

Ideologically speaking, the best fit probably would have been a deal between the Labour Party and the Liberal Democrats, but there were two problems here.

First, the Conservatives won a lot more seats than Labour, so there was a strong sense that the former had “won the election” and should get to select the prime minister. Second, even in combination, Labour and the Liberal Democrats were a few seats short of a majority, which meant they would have had to rely on secondary alliances with the regional parties to form a majority.

So instead, the Liberal Democrats opted to work with David Cameron’s Conservative Party and form a coalition cabinet. This is highly unusual in UK politics. But they opted for this course rather than letting Cameron form a minority government, supposedly due to the need for stability in a time of economic crisis.

To further that goal of stability, the coalition government then passed the Fixed-Term Parliaments Act of 2011, which denied the prime minister the authority to unilaterally call a new election. Under the new system, a Parliament would last a full five-year term unless a two-thirds supermajority voted for dissolution and early elections.

This law served its specific purpose and ensured that the coalition lasted its whole five-year term. But it’s now carried forward into a totally different situation and produced an unprecedented ability for the executive and legislative branches to systematically disagree.

The current impasse began with Conservative Prime Minister Theresa May’s efforts to get Parliament to approve the Brexit agreement she’d negotiated with the European Union at the beginning of the year.

Unfortunately, while no one in Parliament could seem to agree on what kind of deal they wanted, they all — including members of her own party — agreed that they didn’t like the deal May had on offer.

The Conservative Party contains a large faction that either actively favors a total rupturing of UK-EU ties (“hard Brexit”) or at least believes that a willingness to accept a chaotic “no deal” scenario will improve the UK’s bargaining hand and create a more satisfactory deal.

That meant that compromise measures designed to guarantee that there wouldn’t need to be a traditional border between Northern Ireland (which as part of the UK would be leaving the EU) and the Republic of Ireland (which is still in the EU) couldn’t pass Parliament with purely Conservative votes.

But rather than prop up May’s compromise efforts, opposition Labour leader Jeremy Corbyn took the position that the real problem was May and her negotiating position. He wanted a fresh election that he hoped to win, thus enabling him to pursue his own approach to Brexit (what exactly that approach would be has been a matter of some dispute).

Key to this strategy was the belief that Labour was likely to do well in a new election, primarily because of the rise of a new Brexit Party that espoused a harder line than May. Labour believed that vote-splitting between the Conservatives and the Brexit Party could bring them to power, either alone or in partnership with some of the other parties.

With both Conservatives and members of the opposition blocking her every move, May faced a complete deadlock that eventually led to her resignation.

Johnson has promised to pull the UK out of the EU by the October 31 deadline, “do or die” — meaning with or without a deal with the EU in place. He also argues that the threat of a disruptive “no deal” Brexit will intimidate the EU into offering the UK better terms. Johnson is almost certainly wrong about this, and people familiar with Brussels say he’s fundamentally misunderstanding how the European Union works.

A critical faction of rebel Conservative MPs disagree with this strategy and sided with the opposition to block his plans. So now Johnson wants new elections — elections that he believes he will win because, having co-opted the hardline position on Brexit, he will secure a unified vote of Brexit supporters, while the skeptics will be divided across several parties.

Under the “classic” UK political system, this is exactly what would happen. Johnson would call a new election, and either the rogue Conservative MPs would be replaced by more reliable members, thus enabling Johnson to carry out his agenda unimpeded, or he’d lose big time and someone else would become prime minister and get to try their hand at managing Brexit.

But under the fixed-term system, this doesn’t work: A new election can be called only if the governing party and the opposition both agree to do one. And for that to happen, basically one party or the other has to miscalculate about who is going to win.

Right now, though, Johnson and Corbyn both agree that a fast election would likely help Johnson, so it seems unlikely to happen. The result is a situation that’s become very familiar to Americans: a mix of gridlock and “constitutional hardball” in which party leaders seek to exploit various technicalities or little-used powers to gain advantage and the actual policy outcomes don’t represent any party leader’s stated preference.

Since the main purpose of the Fixed-Term Parliaments Act was to secure the stability of one particular coalition government, the law perhaps should have been written to automatically expire after five years. Had that happened, the underlying arguments shaping Brexit would be exactly the same, but the ongoing entrenched political crisis would have been impossible.