The controversy around the White House banning a CNN reporter, explained 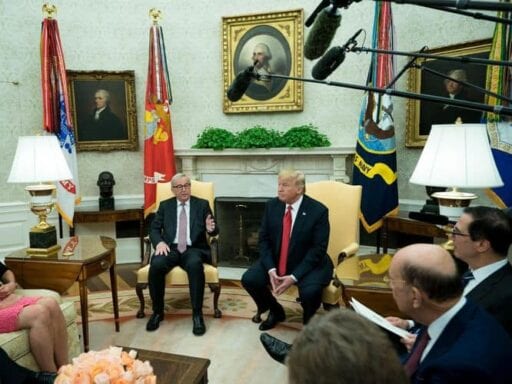 A CNN correspondent was doing her job — firing off questions about Michael Cohen and Vladimir Putin to the president during a photo op on Wednesday — when the White House barred her from attending another open press event later that day because of her “inappropriate” questions.

Kaitlan Collins, a CNN correspondent said that the White House retaliated against her after she asked questions of President Donald Trump during a session in the Oval Office ahead of the president’s trade meeting with European Commission President Jean-Claude Juncker.

Collins was the designated pool reporter at the photo op, meaning she was representing all the major television networks, when she asked the president questions about the recently released recording of Trump and his former attorney Michael Cohen discussing a payoff to a former Playboy model, and about Trump’s invitation to Russian President Vladimir Putin to visit the White House.

Trump did not answer any of Collins’s questions, but afterwards, Collins said, she was called into the office of Bill Shine, the White House’s new communications chief. There, Shine and White House press secretary Sarah Sanders told her that she wouldn’t be allowed to attend an open press event in the Rose Garden later on Wednesday afternoon “because they thought the questions that I posed to President Trump were inappropriate and inappropriate for that venue,” Collins recalled.

Lobbing questions at the president on the topics of the day is standard practice — even sensitive questions about Cohen and Putin. But barring a reporter for asking those question is not. Trump, and by extension the White House, has maintained a hostile relationship with the press since the beginning of the administration. It’s clear that Shine, Trump’s latest communications chief and former Fox News executive, isn’t changing course.

“I told them that is often our only chance to ask the president questions,” Collins said on CNN Wednesday. “Those questions are questions any reporter would have asked, and I was there to represent all the networks, and therefore ask about the questions of the day.”

Collins was doing her job

It’s standard practice for reporters to throw rapid-fire questions at the president during similar photo ops. Reporters often try to ask about the most pressing topics of the day, even if they have nothing to do with the topic at hand precisely because, as Collins argued, they don’t have many other opportunities to ask the president tough questions. (The White House also did not host a daily press briefing Wednesday.) The president can choose to answer the questions, or ignore them altogether, as he did on Wednesday.

Collins told CNN’s Brian Stelter that Shine and Sanders said that CNN wasn’t barred from sending other reporters to the Rose Garden event — just her. The event Collins was reportedly barred from attending featured brief remarks from Juncker and Trump about EU-US trade negotiations. Neither leader took press questions after their statements.

In a statement, the White House said confirmed that Collins had been disinvited, but claimed that she had “refused to leave despite repeatedly being asked to do so.”

“To be clear, we support a free press and ask that everyone be respectful of the presidency and guests at the White House,” Sanders said in a statement.

.@PressSec is continuing to malign @kaitlancollins with a false statement saying she “refused to leave” the Oval Office after a press event. I was there.
I saw reporters doing their jobs and asking questions of the president, then leaving w/o incident. pic.twitter.com/I1nbGr8DwT

If Collins was “shouting questions,” as Sanders alleged, that’s part of her job — to get the president to hear her from her corner. This is what happens at pretty much every press sessions, and the video of the interaction suggests she didn’t do anything out of the ordinary. “If that’s the standard, they will have to bar every member of the press poll since that’s what all of us do,” said New York Times’s chief White House correspondent Peter Baker on Twitter.

The only shouting is from White House staff. @PressSec is lying. pic.twitter.com/y6bkSvTWuw

“This type of retaliation is wholly inappropriate, wrong-headed, and weak,” the statement read. “It cannot stand. Reporters asking questions of powerful government officials, up to and including the President, helps hold those people accountable.”

Statement from White House Correspondent’s Association ⁦@whca⁩ on today’s ⁦@WhiteHouse⁩ exclusion of a TV correspondent from a Pool event pic.twitter.com/IOlKIIf883

Fox News also came out strongly against Collins’s disinvitation from the event, saying it stands “in strong solidarity with CNN for the right to full access for our journalists.”

The White House’s hostility toward the press is old news. But it’s still alarming.

This White House — and the Trump campaign before that — has had a tense relationship with the press, one that trickles down directly from the man in charge with his incessant “fake news” attacks.

Trump is especially harsh about coverage relating special counsel Robert Mueller’s investigation, or what he calls the “Russia hoax” and other scandals swirling around his administration, including the antics of his former attorney and fixer Michael Cohen. Collins was asking pointed questions about Cohen and Putin that the White House didn’t want the president to have to answer; but that doesn’t mean the Collins didn’t have the right to answer them.

CNN is a frequent target of his ire; during a press conference with Prime Minister Theresa May two weeks ago, Trump refused to take a question from CNN’s Jim Acosta, calling the network fake news and instead taking a question from Fox News’s John Roberts, which Trump referred to as a “real network.”

And Trump continues to come under fire for his constant attacks of the press. He’s back to calling the media the “enemy of the people.” On Tuesday, at a Veterans of Foreign Wars convention in Kansas City, he lambasted the press corps covering his speech for their coverage of his trade policies. “Don’t believe the crap you see from these people, the fake news,” he said, egging the crowd on to heckle the reporters.

“Just remember,” Trump continued, “what you’re seeing and what you’re reading is not what’s happening.”

Terminator: Dark Fate is all about the kickass ladies
The Joe Biden and Anita Hill controversy, explained
Is it time to do away with job applicant drug testing?
Trump wants Congress to give him more power to impose tariffs
How Congress is preparing for the coronavirus
Jared Kushner is trying to sell his Middle East plan at a conference in Bahrain