The controversy over Biden not holding a formal press conference, explained 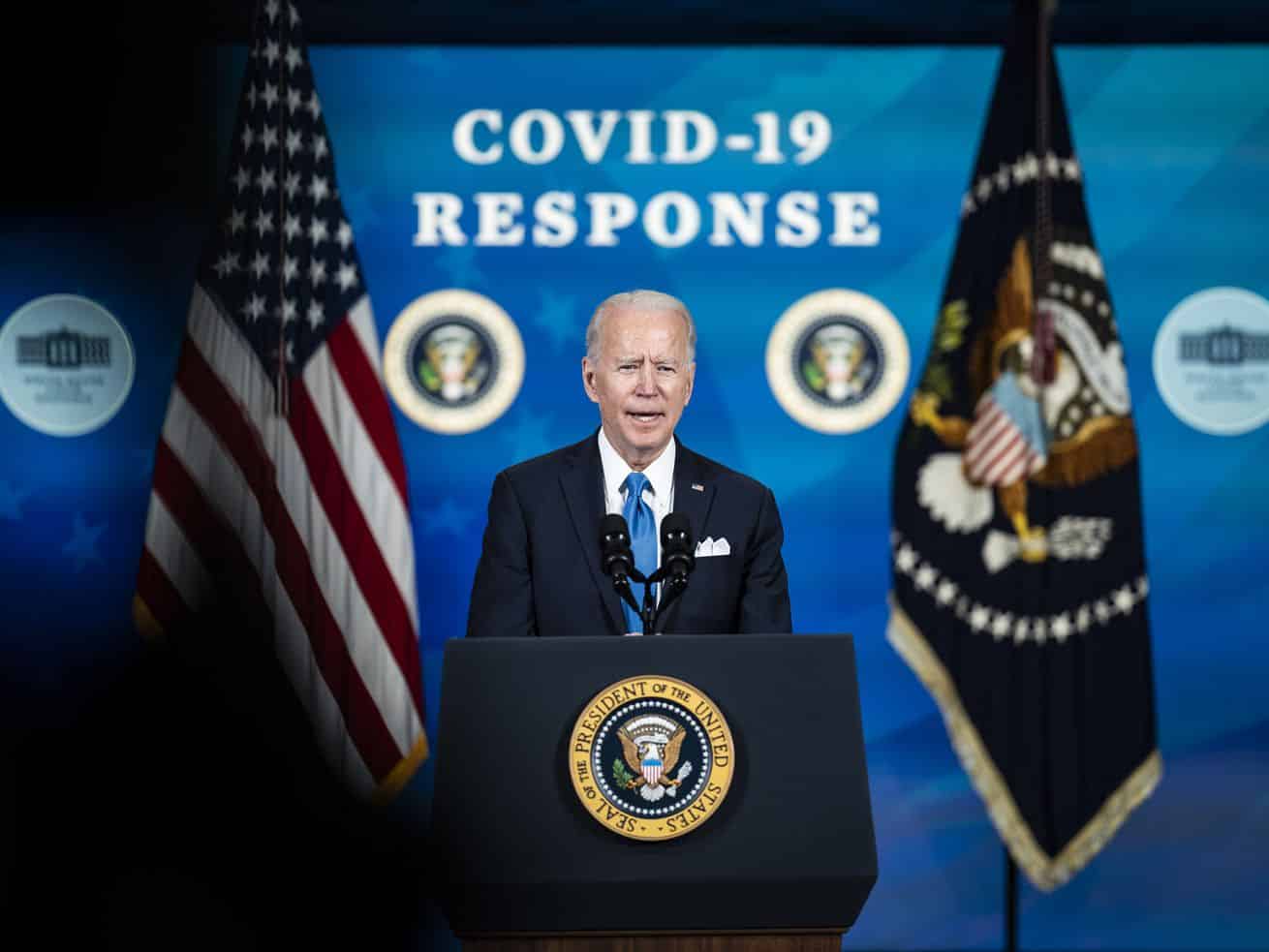 There are legitimate criticisms of Biden. That he hasn’t held a press conference yet isn’t really one of them.

As President Joe Biden signed a $1.9 trillion Covid-19 relief bill that is supported by a solid majority of Americans and that funds distribution of coronavirus vaccines, among many other things, Fox News is fixating on something he’s not doing: holding formal news conferences.

While he’s answered questions from reporters in informal settings numerous times and held a CNN town hall, Biden has now gone 50 days without holding a formal news conference. It’d be ideal for him to do one, but there are many good reasons he hasn’t yet — the urgent public health and economic crises he inherited, a pandemic that complicates logistics, and the legacy former President Donald Trump left him of presidential news conferences doubling as hate spectacles.

Still, it’s starting to aggravate members of the press corps, with the president of the White House Correspondents Association telling Vanity Fair that full press conferences are “critical to informing the American people and holding an administration accountable.” And the Washington Post editorial board wrote that “it’s past time for Biden to hold a news conference” — even while acknowledging that more press availability didn’t equal more truth or transparency with the previous president.

The careful wording of the Post’s editorial board exemplifies how journalists are having to reevaluate relationships to power and what it means to do adversarial journalism now that the White House isn’t the home of a habitual liar who routinely made reporters objects of hate, even while he was accessible to them with regular helicopter-side press availabilities and coronavirus press briefings that are best remembered for Trump floating the idea of disinfectant as a cure for Covid-19.

But on the cable network that benefitted most from the Trump presidency, all of that nuance is lost.

Fox News has done its best in recent days to blow up the fact Biden yet hasn’t had a formal news conference into a major scandal, complete with special graphics and coverage across shows suggesting Biden is hiding something.

On Thursday morning alone, Fox News hosts said things like “President Biden blows off questions from reporters as he goes 50 days without a formal press conference,” and “here we are, day 50 — 50 days in to the Biden presidency — and we’ve got a primetime address, but still no formal news conference.”

While it’s true that Biden has broken from modern precedent in not holding a news conference sometime in his first month in office, press secretary Jen Psaki answers questions from reporters every weekday during briefings that illustrate one of the reasons Biden might not be in a rush to do one himself.

Fox News’s Peter Doocy has distinguished himself during Psaki’s briefings by regularly asking loaded, gotcha-style questions on topics ranging from the national anthem to the Olympics to energy policy to school reopenings.

Jen Psaki wasn’t having Peter Doocy’s strange line of questioning about school reopenings and migrants at the border pic.twitter.com/jlOmj4QsIJ

One can understand why Biden, who has jousted repeatedly with Doocy during press availabilities in recent months, might want to spend his time on things other than helping Fox News create readymade clips for Hannity to own him. But his decision not to engage has fed into the narrative Fox has been pushing since the campaign about him purportedly hiding something and being lower energy than former President Donald Trump.

“Your viewers remember when [Trump] would walk out to get on Marine One, he would just do those impromptu press conferences and he’d take every question, all questions, sometimes he’d stay there for 30, 40 minutes,” said Rep. Jim Jordan (R-OH) during Tuesday’s edition of Sean Hannity’s show. “That’s what the American people deserve.”

this would be a bit much for North Korean TV pic.twitter.com/DX9wNxm3BD

What Jordan and Hannity won’t mention, of course, is that while Trump may have been more willing to engage with reporters than Biden himself has so far been, the former president’s interactions with reporters were the opposite of constructive.

Trump’s news conferences are nothing to be wistful about

No discussion of the controversy surrounding Biden and news conferences (such as it is) would be complete without recalling that during the Trump years, presidential engagement with reporters was more WrestleMania than a good-faith sharing of information — something Psaki has tried and mostly succeeded in doing during her press briefings.

To be clear, political journalism that doesn’t hold the powerful to account is nothing more than public relations. Some degree of tension between the press and elected officials is a good and natural thing. But during the Trump years, the relationship between the executive branch and the journalists that covered them devolved into an abusive one.

For instance, during Trump’s first formal news conference — held on February 16, 2017 — he lambasted the press for accurately covering the circumstances surrounding the resignation of National Security Adviser Michael Flynn amid revelations he lied to the FBI about his contact with Russia, saying things like “the reporting is fake” and blasting reporters as “dishonest.”

That press conference was such a disaster that Trump went more than a full year before he held another. Yet some observers are contrasting Trump’s February 2017 cage match with the fact Biden hasn’t had a press conference yet as evidence that Biden is somehow falling short.

File under things we’d all be going crazy about if Trump did it. Biden has gone 50 straight days without holding a proper, solo press conference. “The previous record was set by President George W. Bush, who waited 33 days.” https://t.co/RMkL5ew5AP

While Fox News would likely use a Biden press conference to create gotcha moments, there are legitimate questions the president should answer. What’s his strategy for increasing the minimum wage, given that it didn’t make it into the Covid-19 bill? What’s his long-term plan for dealing with the recent surge of undocumented immigrants at the southern border? What’s his response to Democrats who have criticized his decision to launch airstrikes in Syria?

“We look forward to holding a full formal press conference, but in the meantime the president takes questions from the reporters covering the White House regularly, including this morning [on March 3],” she said. “And his focus day in and day out is on getting the pandemic under control and putting people back to work. That’s what people elected him to do.”

Indeed, while signing the Covid-19 bill on Thursday, Biden hinted he’ll hold a news conference soon, telling reporters he’ll be “take questions” from them “in the next couple days.”

It’s fair to point out that Biden has gone a relatively long time without having a news conference. But the tendency that has been most pronounced on Fox to blow the issue up into a major scandal illustrates the difficulty they’re drawing blood on the Biden administration.

Before presser-gate became a big topic, Fox News spent the better part of a week blaming Biden for the (fake) cancelation of Dr. Seuss. Hannity has relentlessly pushed conspiracy theories about Biden’s health, while the network’s “news side” has been heavy on stoking right-wing grievance with never-ending discussions of “cancel culture.”

In this instance as in so many others, Fox’s coverage echoes what prominent Republicans like RNC Chair Ronna McDaniel are saying:

A question for him: Your press secretary said you’re “not in a rush” to counter China. Why? How long do we have to wait for you to stand up to China?

It’s tough for Republicans to attack Biden on the merits right now, given that even a majority of Republican voters support the signature piece of legislation he just signed. But it’s also worth noting it’s not just Fox.

On Thursday, for instance, ABC ran a piece headlined, “Biden not yet holding a news conference raises accountability questions.” And CNN on March 3 ran an article with this lede: “There are many ways to measure an American president’s accessibility. One way is by counting press conferences. Right now, by that count, President Biden looks invisible.”

But if the Trump era taught us anything, it’s that it isn’t the volume of communications a presidential administration has with the press that’s important — it’s their character and quality. Biden himself may so far be less accessible to the press than Trump was, but given what the country endured during the Trump era and the mess Biden inherited, the American people don’t seem to mind that so far he’s been focused on more pressing things.

Fox News barely covers McConnell’s scathing statement about Marjorie Taylor Greene
Community was one of the most inventive shows in TV history. It just started streaming on Netflix.
How to avoid another election year like 2020
Trump promised 200,000 Covid-19 vaccinations a day. That’s 5 to 9 years to vaccinate the US.
Trump responds to Ukraine whistleblower scandal with contradictions and transparent falsehoods
Syria has confirmed its first cases of coronavirus. An outbreak there would be hell.