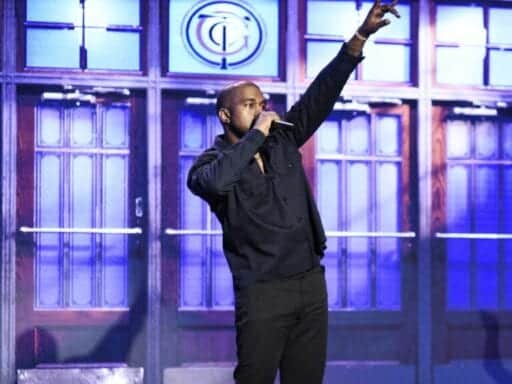 It was a busy weekend for Kanye West.

Most notably, after an appearance on Saturday Night Live, West wrote a pair of tweets calling for the 13th Amendment, which outlawed slavery, to be abolished.

The tweets were West’s (who recently told fans he will now go by “Ye”), second headline-grabbing moment in less than 24 hours. Shortly after performing on SNL, West gave a speech defending President Donald Trump on stage that doubled as a monologue complaining about black voters’ relationship with the Democratic Party.

“It’s so many times that I talk to a white person about this, and they say, ‘How could you support Trump? He’s racist.’ Well if I was concerned about racism, I would have moved out of America a long time ago,” West said in the speech, which started after the cameras had stopped, and went viral after it was shared by comedian Chris Rock. “We don’t just make our decisions off of racism. I’ma break it down to you right now: If someone inspires me and I connect with them, I don’t have to believe in all they policies.”

Trump later praised West’s speech, tweeting that the rapper is “leading the charge.”

As that controversy kicked off, West began a new one on Sunday morning, when he tweeted a photo of himself wearing a Make America Great Again hat, saying that “this represents good and America becoming whole again.”

“We will no longer outsource to other countries,” West added. “We build factories here in America and create jobs. We will provide jobs for all who are free from prisons as we abolish the 13th amendment. Message sent with love.”

this represents good and America becoming whole again. We will no longer outsource to other countries. We build factories here in America and create jobs. We will provide jobs for all who are free from prisons as we abolish the 13th amendment. Message sent with love pic.twitter.com/a15WqI8zgu

Shortly after, West doubled down on his earlier 13th Amendment remarks, calling it “slavery in disguise, meaning it never ended.”

The pair of tweets were swiftly criticized by figures like former NAACP president Cornell William Brooks, celebrities like actor Chris Evans and singer Lana Del Rey, and the others on social media. In a later tweet, West claimed that he didn’t actually mean that the entire 13th Amendment should be abolished, an attempt at a save that did little to quell criticism.

Much of the backlash against West is the result of a cycle the rapper has created: He makes a poorly reasoned and usually inaccurate remark about race or slavery, and later walks it back after coming under fire. West did something similar in the spring when he referred to slavery as a “choice,” only to later say he was sorry for offending black people.

West’s remarks about the 13th Amendment fall into this pattern. But his remarks, while poorly argued and not explained, did seem to indirectly highlight a concern prison reform groups have raised about the 13th Amendment for years: While it abolished slavery, the amendment also allowed for systems of prison labor that facilitated the spread of modern mass incarceration.

Unfortunately for West, his statements lacked the depth or nuance to fully articulate this concern, making his tweets just the latest in a string of controversial remarks about slavery and race in America.

The 13th Amendment abolished slavery, but maintained an aspect of it

As the Washington Post notes, the 13th Amendment is one of three “Reconstruction Amendments,” a trio of constitutional changes passed after the Civil War. These amendments extended constitutional rights to former slaves and other African Americans.

The first of these was the 13th Amendment, which is widely known for enshrining the abolition of slavery in the Constitution. It reads:

Neither slavery nor involuntary servitude, except as a punishment for crime whereof the party shall have been duly convicted, shall exist within the United States, or any place subject to their jurisdiction.

The 14th Amendment followed, establishing equal protection under the law, and then the 15th Amendment came next, which extended voting rights regardless of “race, color, or previous condition of servitude.” While all of these were passed in the years following the end of the Civil War, the continued mistreatment of black Americans and the spread of Jim Crow meant that it took another century before these rights were freely exercised by many African Americans.

At the time, the 13th Amendment attracted criticism from politicians who believed that the clause allowing slavery and involuntary servitude as a form of criminal punishment would allow slavery to persist in the United States.

“To my mind [the words in the exception clause] are entirely surplusage,” Massachusetts Sen. Charles Sumner, an anti-slavery Republican, said at the time. “They do no good there, but they absolutely introduce a doubt.” As the Post notes, Sumner proposed changing the language of the amendment to remove the “exception clause” but his concerns were dismissed by the Senate Judiciary Committee.

“The 13th Amendment’s exception clause allowed the convict-leasing system to flourish and grow, and it became the dominant form of imprisonment throughout the south,” Robert Perkinson, a professor at the University of Hawaii, told the Post. “Thousands lost their lives in the process, and it was hugely profitable for state governments.”

This system laid the groundwork for more modern systems of prison labor as well as what is now known as mass incarceration, which imprisons a disproportionate number of black men for extensive periods of time. As filmmaker and director Ava DuVernay highlighted in her documentary 13th, even as the amendment outlawed many forms of slavery, it allowed for systems like convict leasing, in which prisoners are leased out to private plantations as laborers.

“There’s a reason why this was written into law,” Dennis R. Childs, an associate professor at the University of California at San Diego who has studied the history of black incarceration, told the Post. “They needed to have a legal cover for [re-enslavement], and the best way to do that was to use [African Americans’] poverty, landlessness, joblessness — their collective dispossession — and the Jim Crow legal system as an excuse to re-enslave that population.”

This debacle is about more than West’s 13th Amendment comments

Historians and activists affiliated with causes like the National Prison Strike have long highlighted how the exception clause of the 13th Amendment has been used to create a prison labor system that can be compared to slavery.

Reading West’s comments with this context, it’s possible that he was referring to the exception clause when he tweeted, “We will provide jobs for all who are free from prisons as we abolish the 13th amendment.” West seemed to confirm this on Monday when he tweeted out the Washington Post’s article on the topic.

But if this is what West meant, he did a poor job of explaining it. Rather than a comment highlighting the issues created by the exception clause, West called to abolish the entire 13th Amendment, attracting far more concern. Even when he clarified that he thought this part of the amendment should be amended, his remarks were light on the details, and didn’t show that he truly understood his mistake.

For those who have somehow managed to never hear of Kanye West or his commentary, maybe this controversy, born of Twitter statements and largely confined to that platform, seems overblown.

But this isn’t just about what West tweeted on Sunday. It is also about his actions over the past few months where he’s repeatedly made misinformed comments about slavery and then defended himself as a “freethinking” person being unfairly chastised by other African Americans. And it’s about how those comments feed into the idea that statements about the damaging effects of racism in America are overblown.

In the past few months, West has developed a tendency to make grossly inaccurate statements on these topics, often while he is talking about his support for Trump. Take, for example, West’s comments in April that slavery was “a choice” that resulted from blacks being “mentally imprisoned.” Those remarks overlooked the vast system created to preserve slavery and instead reduced it to simply being about a supposed lack of willpower. The comments were not a difference in opinion brought on by enlightened thought — they were a rejection of history and of facts.

West apologized for those remarks in August, but his more recent statements have made it clear that he has not actually learned from them. Videos and articles about West’s visit to popular music outlet the Fader last week show the rapper — at the time clad in a “Make America Great Again” hat and a shirt referencing former NFL quarterback Colin Kaepernick — continued to make comments about slavery that are demonstrably false, like his belief that by the 1800s there were just 800 slaves in America. The actual number was closer to 4 million.

While remarks like these have distanced West from some fans, they have led to support from other groups. Trump has repeatedly thanked West for his public statements of support, crediting them for a supposed increase in support from black voters (this was not actually the case), while conservative commentators have argued that West’s support is proof that Trump and the Republican Party at large are not racist. West claims he’s changed the image of Trump supporters and MAGA-branded apparel.

This belief relies on a fundamental misunderstanding, and not just of black voters. It’s a misunderstanding of how black communities think about race and politics. West’s support of Trump has been touted as being powerful enough to sway the opinions of black people. Trump seems to believe he is connecting with them even as West regularly misspeaks about slavery and what sustained it, showing just how much Trump’s understanding of the issue differs from the group he purportedly wants to engage.

Kanye West has always thrived on ego and controversy, and at a time when marginalized groups openly express anxiety under the Trump administration, his comments and support of the president are getting a lot of attention. West continues to project the belief that his remarks show his persuasive genius and advanced thought. Instead, his remarks call attention to just how little West actually understands about slavery.