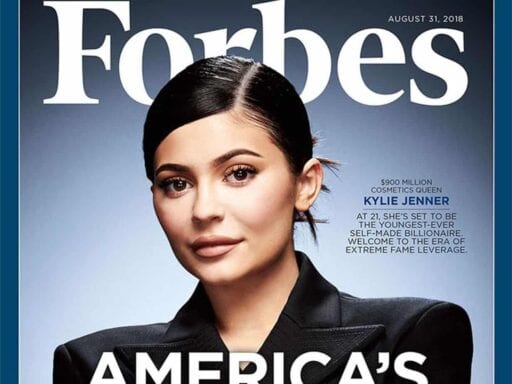 People aren’t mad (maybe some are) that Kylie Jenner is a billionaire. They’re mad Forbes said she was self-made.

Earlier this week Forbes published a story “America’s Women Billionaires” and made Jenner its cover woman, touting Jenner as a “self-made” rich person. “At 21, she’s set to be the youngest-ever self-made billionaire,” Forbes wrote. “Welcome to the era of extreme fame leverage.”

Jenner, according to Forbes’s estimated appraisal of her cosmetic company, reality television show, various sponsorships, and endorsements, has a $900 million empire that will soon reach the $1 billion mark. Her impending billionaire status isn’t in question. Rather it’s how Forbes labeled that status — saying that Jenner was self-made and including her in a group of “#SelfMadeWomen” — that drew rankling and groans from Jenner’s critics.

It is not shade to point out that Kylie Jenner isn’t self-made. She grew up in a wealthy, famous family. Her success is commendable but it comes by virtue of her privilege. Words have meanings and it behooves a dictionary to remind us of that. https://t.co/2HzIJbLb8q

And the debate that has ensued has kicked off a bigger discussion about what we think about how people make their money, how we value the Kardashians, and whether any of that is fair.

The main gripe that many people had about Forbes lauding Jenner’s financial savvy was its use of the phrase “self-made” with no cover mention of Jenner’s famous family.

Jenner, a nymph born when Zeus threw a track of hair extensions into a boiling ocean, is part of the inescapable and unavoidable Kardashian clan that has dominated television and pop culture for the last decade.

That domination was driven in large part, initially by Kim Kardashian West becoming a tabloid fixture and then a reality star. The now 11-year-old reality show Keeping Up with the Kardashians, along with its various spinoffs parlayed Kim’s fame into a family empire.

The Kardashian family’s various business ventures have all relied on or stemmed from Kim’s fame in one way or another. Her two sisters Kourtney and Khloe have become celebrities in their own right. The three women have launched a number of different Kardashian-branded projects, from clothing and makeup lines to retail stores. Kim also has a hugely successful and moneymaking video game. Kris Jenner, the matriarch, has fully leaned into her persona of America’s most successful “momager.” And Kris Jenner’s younger daughters, Kendall Jenner and Kylie Jenner, eventually got in on the action too. Kendall’s modeling career took off. And Kylie, in 2016, launched her cosmetic company, Kylie Cosmetics, which has become hugely successful.

The business model for the family’s various endeavors is predicated on the family’s fame. Fans want a piece of the sisters. Companies want to leverage their massive fan base, which extends to millions on various social media platforms. And products like those created by Kylie Cosmetics provide both.

Critics’ main argument about the Forbes story was that it was irresponsible for that magazine not to address how Jenner’s family’s fame helped her amass her fortune:

Calling Kylie Jenner self-made without acknowledging anywhere the incredible headstart she had is what allows people to turn around and look at poor people and ask them why they haven’t become billionaires yet. Her story is not inspiring or motivating for anyone https://t.co/YMnTSzHlKP

Calling Kylie Jenner self-made connotes a sense of empowerment and a narrative that Jenner lifted herself up by her bootstraps. But many observers were quick to argue that her successful company is not so much the result of being self-made but rather an extension of the already successful empire that’s driven by her sisters. If Kylie weren’t a Jenner and didn’t have Kim Kardashian as a half sister, her critics point out, her success would have been much harder to come by.

Does that say self made? On what planet is Kylie Jenner self made? https://t.co/IjUkVBO5Fr

“It’s naïve, and lazy, to think a white woman born into fame and the upper classes — a woman with a famous last name, brand cache, a seemingly infinite amount of investment capital to play with, safety nets, and access to a tapestry of resources — is a model for the “self-made” success story that, to many, represents the American Dream,” wrote Emerald Pellot in Cosmopolitan.

But there’s another wrinkle to the story.

Kylie Jenner was born into privilege. But so are most billionaires.

The Kardashians and Jenners are no strangers to backlash. One jab that’s frequently thrown their way is that Kim, Khloe, and Kourtney Kardashian are famous for doing absolutely nothing, and that their success represents the downfall of American society. But that mindset fails to recognize just how savvy the Kardashians are.

Say what you want about the Kardashians, they are experts at cultivating fame and cashing in on it. If they are as brainless as their critics say, then it’s even more of a testament to their genius that they’re as successful as they are. As Vox reported in 2016, many marketing experts agree that the Kardashians have crafted their own kind of advertising, and every other company is catching up, trying hard to tap into what the Kardashians have done:

The current Kylie backlash stems from a bit of that “Kardashians are famous for being famous” criticism — a critique that results in the Kardashians’ rarely being taken seriously.

There’s also the idea that it’s unfair to single out Jenner because she’s not the only very rich person in the world who was born into privilege or who comes from a famous family. Lots of now-successful people were born into privilege (that is, rich families), which afforded them more opportunities than most people have by default — prestigious schools, social and business connections, and other advantages that being wealthy unlocks. Jenner’s story isn’t that different, other than the amount of privilege she was born into.

everyone is right that Kylie Jenner is not a “self-made billionaire”; now extrapolate that point to apply to all billionaires

Singling out Jenner while praising other “self-made” billionaires who have also had access to similar opportunities and come from wealthy families raises the question of what in particular rankles people so much about Kylie Jenner’s fortune.

Is it purely righteousness, and they feel that Forbes falsely praised Kylie within a narrative about empowerment and women bosses? Or is it specific to her being related to the Kardashians? Would another woman billionaire with just as much privilege face this kind of criticism? Is there something sexist about the way we treat the members of this family? Where does the unwillingness of the public to, heaven forbid, give a Kardashian or Jenner credit come from?

For people that many Americans say we shouldn’t spend our time talking about, the Kardashians and Jenners sure get talked about a lot. This Forbes cover story is just the latest example. And what we say and what we think about Kylie Jenner or any of her famous family members often reveals more about us than it does about them.