The controversy surrounding the Times’s handling of the latest Kavanaugh allegation, explained 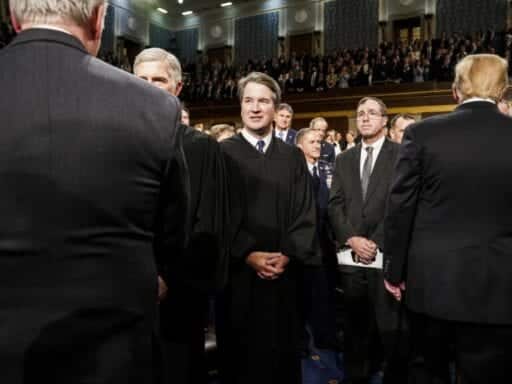 A bad tweet, buried lede, and editors’ note ended up making the New York Times itself part of the story.

Over the weekend, the New York Times broke news about a previously undisclosed sexual misconduct allegation against Supreme Court Justice Brett Kavanaugh. But while the story has resulted in fresh calls for Kavanaugh’s impeachment, controversy has also swirled around at least three aspects of the Times’s presentation.

The piece, authored by Times reporters Robin Pogrebin and Kate Kelly and adapted from their forthcoming book about the Kavanaugh allegations, describes a “previously unreported story” about how Kavanaugh allegedly “pushed his penis into the hand of a female student” during a “drunken dorm party” when he was a student at Yale. Although said to be a separate incident, this story mirrors the account of Deborah Ramirez, who came forward during Kavanaugh’s SCOTUS confirmation process to accuse him of sexual misconduct while they were students at Yale.

The new allegation was brought to the Times’ attention by one of Kavanaugh’s classmates, Max Stier, who runs a nonprofit in Washington, DC. The story also indicates that Stier “notified senators and the FBI about this account, but the FBI did not investigate and Mr. Stier has declined to discuss it publicly.” Similarly, the FBI declined to interview witnesses Ramirez offered to provide to corroborate her story.

In short, Pogrebin and Kelly’s reporting provides new evidence not only that Kavanaugh may have engaged in a pattern of sexual misconduct that he wasn’t truthful about during his confirmation hearings, but also that the FBI did little investigative work — just enough to give Republicans who supported the justice cover from their critics to ensure Kavanaugh’s confirmation. But the way the Times presented the story distracted from these revelations, and instead put some of the scrutiny on itself.

The Times’s rollout of Pogrebin and Kelly’s got off to a disastrous start. In a tweet sharing the story that was posted on Saturday, the New York Times Opinion section used language that seemed to downplay, if not excuse, sexual assault.

“Having a penis thrust in your face at a drunken dorm party may seem like harmless fun,” the tweet began.

oh my god this is a real tweet pic.twitter.com/82avBH4o4I

We deleted a previous tweet regarding this article. It was offensive, and we apologize. https://t.co/gbUdweKbDg

But the bad tweet wasn’t the only aspect of the Times’s presentation that has been the subject of controversy.

The new misconduct allegation against Kavanaugh was somewhat buried in the 11th paragraph of a story that mostly focuses on Ramirez’s personal tale. And the story was published in the Sunday Review section — one that includes both news analysis and opinion pieces. While Ramirez’s account certainly serves to both highlight and explain a culture in which sexual misconduct goes unpunished, considering that the new misconduct allegation is a big revelation in its own right, it would have made sense for the Times to highlight it in a separate news piece. Instead, the lede was buried.

In a Twitter thread addressing controversy surrounding the story, Times PR staff explained that Sunday Review “frequently runs excerpts of books produced by Times reporters,” and that “[t]he new revelations contained in the piece were uncovered during the reporting process for the book, which is why this information did not appear in The Times before the excerpt.”

The excerpt of the book was published in the Sunday Review, a section that includes both news analysis and opinion pieces. The section frequently runs excerpts of books produced by Times reporters.

The Times’s presentation of the new Kavanaugh allegation was reminiscent of how it treated E. Jean Carroll’s sexual assault allegation against President Donald Trump when she came forward with it last June. Carroll’s allegation was initially covered in the Times’ online Books section, and later buried in the 23rd page of the front section of the print edition. As controversy swirled about those choices, Times executive editor Dean Baquet acknowledged that the story “should have been presented more prominently.” But it appears lessons were not learned.

Concerns about presentation aside, the substance of the Times piece dominated the news cycle on Saturday and Sunday and put fresh scrutiny not only on Kavanaugh’s presence on the nation’s highest court, but also on the process that placed him there. President Donald Trump quickly took to Twitter and tried to discredit the story, urging Kavanaugh to “start suing people for libel, or the Justice Department should come to his rescue. The lies being told about him are unbelievable.”

While Trump didn’t cite any specific “lies,” on Sunday the Times added an “Editors’ Note” that provided ammo to those seeking to dismiss the latest misconduct allegation against Kavanaugh. According to the editors’ note, friends of the woman who was the alleged victim of Kavanaugh’s misconduct at the dorm party claim she doesn’t remember the incident, and the woman herself wouldn’t speak to the reporters — details that weren’t included in the original version of the story.

An earlier version of this article, which was adapted from a forthcoming book, did not include one element of the book’s account regarding an assertion by a Yale classmate that friends of Brett Kavanaugh pushed his penis into the hand of a female student at a drunken dorm party. The book reports that the female student declined to be interviewed and friends say that she does not recall the incident. That information has been added to the article.

On Monday morning, Fox & Friends coverage of the Kavanaugh story centered around the editors’ note, not the new allegation itself. Trump, taking cues from his favorite show, seized upon the note as a way to turn the allegation into a line of attack against the media.

“The New York Times walks back report on Kavanaugh assault claim.” @foxandfriends The one who is actually being assaulted is Justice Kavanaugh – Assaulted by lies and Fake News! This is all about the LameStream Media working with their partner, the Dems.

Just Out: “Kavanaugh accuser doesn’t recall incident.” @foxandfriends DO YOU BELIEVE WHAT THESE HORRIBLE PEOPLE WILL DO OR SAY. They are looking to destroy, and influence his opinions – but played the game badly. They should be sued!

Trump, however, is getting ahead of himself. The editors’ note does not suggest that the incident didn’t happen. It just indicates that the person said to have been victimized may not remember it — something that isn’t necessarily all that surprising given that the context was a “drunken dorm party.” And it’s not as though the allegation is completely devoid of corroboration. The story notes that Times reporters corroborated Stier’s story “with two officials who have communicated with Mr. Stier,” though it doesn’t provide details beyond that.

But the addition of the note, coming a day after the story was published and fueled new calls for Kavanaugh’s impeachment, raised questions about what other pertinent details may not have been included in the Times’s piece, and provided grist for conservatives to dismiss the entire thing.

The bottom line is that Kavanaugh now faces (at least) three separate sexual misconduct allegations. Each of them is corroborated to some extent, but during his confirmation hearing Kavanaugh issued blanket denials. And in addition to detailing the new allegation, the Times reporters who spent months digging into the Kavanaugh allegations also note they found two previous allegations made against him to be credible. (Ramirez’s allegation of sexual misconduct against Kavanaugh came on the heels of Christine Blasey Ford coming forward to accuse Kavanaugh of sexually assaulting her during a party when the two of them were high school acquaintances in Maryland.)

[W]hile we found Dr. Ford’s allegations credible during a 10-month investigation, Ms. Ramirez’s story could be more fully corroborated. During his Senate testimony, Mr. Kavanaugh said that if the incident Ms. Ramirez described had occurred, it would have been “the talk of campus.” Our reporting suggests that it was.

At least seven people, including Ms. Ramirez’s mother, heard about the Yale incident long before Mr. Kavanaugh was a federal judge. Two of those people were classmates who learned of it just days after the party occurred, suggesting that it was discussed among students at the time.

This is a big deal. But because of foreseeable, avoidable missteps, the Times ended up transforming what should’ve been a controversy about the newest member of the nation’s highest court into one that’s partially about itself.

Here’s how police can get your data — even if you aren’t suspected of a crime
The best $1,419 I ever spent: Flights for my long-distance relationship
The gun solution we’re not talking about
There aren’t enough immigration lawyers to handle the family separation crisis
Trump escalates trade war rhetoric with threat of European auto tariffs
This outed priest’s story is a warning for everyone about the need for data privacy laws