The coronavirus has given Trump something he’s always wanted: A chance to totally take over TV 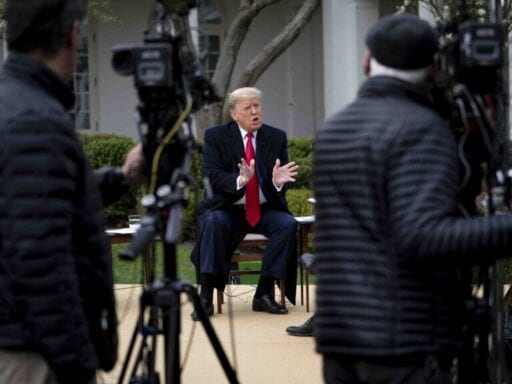 Every day, he’s on TV, spreading misinformation that could contribute to the death of millions.

Late on Tuesday, East Coast time, a few of my colleagues noted something: President Trump had been on TV basically all afternoon. From 12:45 to 2 pm, he had hosted a Fox News town hall. During the 3 pm hour, he sat for a one-on-one interview on (you guessed it) Fox News. And at 5:30 pm, he joined the government’s daily coronavirus briefing.

There were breaks between his appearances, but he kept turning up to talk about how he wanted America open for business again by Easter (a bad idea) or how the flu is deadlier than the coronavirus (it’s not). All of Trump’s statements made headlines. Even though most of his appearances were exclusively on Fox News, which took an even more reverential tone with him than usual, the things he said spread well beyond that channel.

And here’s the thing: For as much as Trump evidently wants to force the country back open for business, no matter how inadvisable that plan may be, he’s getting exactly what he wants as the crisis drags on. He’s on TV all the time. He’s got a captive audience. He can say whatever he wants and the news networks will cover it.

And with the shutdown of almost all TV and film production in the face of the coronavirus threat, as well as the cessation of live sports, it’s not difficult to imagine a world where Trump is just on TV all the time and there’s not much we can do to shut him off.

Donald Trump is a creature of television. It informs how he thinks about the world, and it helped create his public persona. He ran for president as America’s first reality show candidate, and he has largely governed as somebody who’s always looking for a big ratings stunt for sweeps week. A world where all we can watch on TV is Donald Trump is maybe a world he’d love to see.

This is where Trump has wanted to be for a while

Trump’s big realization during the 2016 presidential campaign was that if he could dominate the news cycle and keep driving the story forward, people would be more than happy to keep following that story. Even if he did seemingly villainous things — like calling Mexican immigrants “rapists,” to point to one early example of a controversy that was supposed to destroy his candidacy — those villainous things kept him in the spotlight, and remaining in the spotlight made him feel like the protagonist of the “story” of the election.

People are naturally inclined to root for protagonists. The way Trump often drives the news cycle with boorish (at best) comments will never convince anybody who strongly dislikes him to vote for him. But it probably moved a few undecided voters toward him around the edges of the 2016 vote, which made all the difference. We are drawn to people who seem active, like they’re accomplishing things, even if they’re just creating train wrecks.

At the time, I suggested that Trump had learned these skills from reality television and his days on The Apprentice. On that show, the wild, seemingly out-of-nowhere decisions that he made in the boardroom about whom to fire frequently drove ratings and discussion. The more the story of The Apprentice became about whatever Trump said or did — whether those things made sense or not — the more people wanted to watch the show, at least early on. (The later seasons of The Apprentice were not very highly rated.)

This basic cycle now repeats all the time. Trump says something that’s either easily disprovable or seemingly detached from reality, and the media dutifully fact-checks his statements, but a lot of news consumers only ever hear what he said. His notion that America’s quarantine could and should be lifted before medical professionals recommend it be lifted is yet another example; if you want desperately to be outside your home right now — and don’t we all — you’re much more likely to hear what you want to hear (the president says everything will be okay soon!) and not all of the mitigating information. Trump is counting on that.

Shortly before the 2016 election, when most polling suggested Trump was going to lose, a frequently circulated rumor suggested that his ultimate goal was to start his own TV news network — one that would be a competitor to Fox News and give him a bigger bullhorn than ever before. Setting aside that starting a TV news network is incredibly difficult and was maybe not the smartest of endeavors to embark on in 2016 — much less in 2020, when live TV viewing numbers have plummeted — it made a modicum of sense. Trump clearly loves the kind of attention he gets from appearing on TV, so why not start his own channel?

Since he’s been president, he has often been able to turn the 24-hour news networks into his own ad hoc Trump TV, even if their interest in his every move waxes and wanes from month to month. But in a massive crisis like this one, cable news expects to be able to cut to the president saying something sobering to keep the nation calm, no matter who’s in office. It’s a pattern that has repeated with presidents from both parties in times of crisis.

And as with so many truisms our media holds dearly, Trump has utterly hijacked this idea. By appearing almost daily at press conferences carried by the TV news networks, he’s essentially daring them to stop covering him, a decision that would carry the implicit suggestion that what the president says is not newsworthy.

Considering how many outright fabrications Trump has spread in the past couple of weeks, I think there’s an argument to be made that his words aren’t newsworthy at a time when accurate information is critical. But Trump knows that if anybody stops covering him, that turn of events will be a huge boon to his ability to self-promote. It is really easy to picture how he would spin it! He’s the president nobody wants you to see. He’s the president the media hates so much they censored him from TV. He’s the president who’s trying to save you from the coronavirus hoax. And on and on.

There’s been some concern among those who pay close attention to presidential approval ratings that despite Trump’s bungling of America’s response to the coronavirus from the first, his numbers continue to tick up a little bit with every new poll. The worst days of the virus’s sweep through the US are almost certainly still ahead of us, as the number of infections and deaths continues to rise, so there’s no guarantee those approval ratings will hold. But I would argue that as Trump continues putting himself in front of TV cameras to act like he’s taking charge and driving this narrative forward, he might still benefit. Even if things are falling apart, he’s still “taking charge,” whatever that means. And subconsciously, we love a protagonist.

Ideally, what the president says in a crisis would be calming and thoughtful. Hopefully, it would be empathetic to Americans’ worries and fears, too. If nothing else, it should always be accurate. Trump’s press blitz has been none of these things, but maybe that doesn’t matter. He’s essentially gotten what he wanted: a TV network of his very own, courtesy of Fox News. Let’s just hope all the other TV networks don’t follow suit.

The 3 Democrats running for president and everything else you should know about 2020
What’s really going on with the Lincoln Project, the anti-Trump PAC that’s pissing off lots of peopl...
US tops world in coronavirus cases, Boris Johnson has Covid-19: Friday’s coronavirus news
Kyrgyzstan’s political crisis, explained
Nancy Pelosi: Mueller report briefings to Congress should be unclassified
The 2020 election calendar