The crushing disappointment of Rey’s parentage 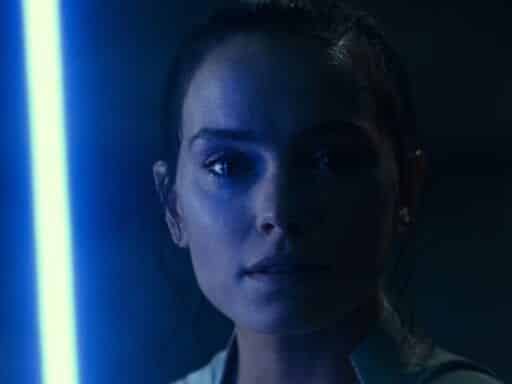 Star Wars: The Rise of Skywalker tramples one of the franchise’s most powerful ideas for no real reason.

Warning: Major spoilers for Star Wars: The Rise of Skywalker follow, but not for several more paragraphs. I’ll let you know when.

When I was a little kid, I loved Superman.

I loved that he was all-powerful, certainly. But I also loved that he was good, that the tragedy of his origins — last son of a dying planet and all that — had not caused him to collapse in on himself and refract his pain onto everybody else. He wanted to use his knowledge of what had happened on the destroyed Krypton to help Earth avoid a similar fate. He was power united with compassion, a blend that is easier to find in fiction than reality.

This idea of being both superpowered and kind was particularly potent to me as an adopted kid. I didn’t know who my biological parents were. Maybe I would learn someday that they had been from another planet, and I had special abilities just waiting to be unlocked. Maybe I was the Chosen One — born of uncertain origins and revealed to be the hero the universe had been waiting for.

I’ve known lots of adopted kids who had similar notions of themselves, especially adopted kids who didn’t know their biological parents when they were growing up. Superman or Harry Potter or Luke Skywalker — all characters who didn’t know the truth about their origins and discovered they were part of some massive saga — spoke to us in ways that reaffirmed this mystery at the heart of ourselves.

When I was 18, I found my biological mother. In my mid-20s, I met my biological father’s other children. (He died before I was able to meet him; I’ve written more about that here.) What I came to understand is that my birth parents weren’t all-powerful beings. They were simply and straightforwardly normal. Whatever was coded in my DNA wasn’t an unspoken destiny; it was just the usual human junk, filled with the same strengths and weaknesses as anybody else. Whatever powers I had were my own. Whatever story I wrote would have me as its author.

It took me a long time to truly realize that, though. The most common pop culture trope about adopted kids — particularly about orphans (which I am not but Superman was) — is that once they discover who they really are, they will be thrust into the middle of some other story entirely. It can be hard to accept that your parents are just people, too, people who have made some of the same mistakes as you have. It can be especially hard when your parents are shadowy figures you cannot remember or know.

That’s one of the reasons I was so affected back in 2017 when Rey, the hero of the latest Star Wars trilogy, discovered in The Last Jedi that her parents were just junk traders. In director Rian Johnson’s vision of the character’s origin — and his vision of the Star Wars saga as a whole — the Force isn’t linked to a lineage of particular characters. Anyone could have it.

The Skywalkers are rich in it, but so is Rey. And she’s just a nobody, just a fundamentally good-hearted person who wants to make the galaxy a better place. Change comes not from the powerful, but from those who believe they are weak and then realize their own power. It’s not a perfect metaphor, but it still works on some fundamental, intuitive level.

Rey had been my Star Wars hero, in the way that Luke was for so many other fans. From the moment I saw Daisy Ridley tooling around a desert planet in 2015’s The Force Awakens — and especially when she first picked up a lightsaber late in that movie — I was moved by her warmth and wit.

When Kylo Ren told her she was a nobody, she was devastated, and I thought back to the moment in my own life when I learned that the story of how I came to be on this planet was so much sadder than I would have imagined. But I was still here. I was still alive. The Force was for anybody. It was a big part of why The Last Jedi spoke to me in a way none of the earlier Star Wars movies had.

(And now we’ve reached the spot where spoilers for the latest Star Wars film, The Rise of Skywalker, lie straight ahead.)

Well, anyway, what The Last Jedi told us about Rey isn’t true anymore, at least not canonically. The Rise of Skywalker finds a fancy way to thread the needle by allowing that, yes, Rey’s parents were nobodies who really did sell her off to the highest bidder. But they were only kind of nobodies, because her dad was the son of Emperor Palpatine, the Big Bad from both original trilogy and the prequels and one of the biggest characters to return in The Rise of Skywalker. Rey’s destiny, Palpatine insists, is to strike him down and take on all of the endless generations of Sith Lords, becoming the great Empress and ruling over the galaxy.

Leaving aside how this moment (and the related one in which Rey and Kylo Ren form a “Force dyad”) jarringly shifts the stakes of this latest trilogy, revealing that Rey is a descendant of Palpatine feels like a self-defeating story turn.

If we had known from the first that Rey was Palpatine’s granddaughter — and trying to outrun a poisonous legacy — that might have been great. But it wouldn’t have jibed with how The Force Awakens and The Rise of Skywalker director J.J. Abrams approaches mystery box storytelling.

Hiding Rey’s origins is supposed to get us super invested in her, because we’re constantly wondering what the “cool” reveal will be. The idea that the granddaughter of ultimate evil will ultimately choose good is a potentially potent one, but it can’t have much of an impact unless we know what the stakes are for most of the story’s running time, unless the temptations she faces feel more real than they do in these films.

But even more powerful than the above idea is the idea that Rey is the last Jedi, the idea that when she faces off against Palpatine at the end of The Rise of Skywalker, with everybody else off the board, she embodies every single other Jedi who’s ever lived. And to me, that moment would have carried so much more weight if Rey was a nobody from a nowhere planet who nevertheless held the fate of the galaxy in her hands. Instead, she’s suddenly drawn into an elaborate family drama that neither she nor the audience knows nothing about. (It’s not like the Star Wars movies have spent any time on Palpatine’s domestic life!)

By film’s end, Rey has rejected her family name of Palpatine and taken on a chosen name of Skywalker, after she sees the Force ghosts of Luke and Leia, her surrogate parents, smiling beatifically at her on Tatooine.

But the scene that prompts her to declare that her last name is Skywalker is so, so, so obnoxious, with a random character riding by to say, “Haven’t seen anyone around here in a while!” as Rey is poking through the remains of the house Luke grew up in. Rey gives just her name — “Rey” — but then is forced to add “Skywalker” after the passerby asks for her family name, which … ugh.

Why can’t Rey be enough? Why must she also be part of a long legacy of heroism? Why do we reserve power for the few rather than the many, even in our power fantasies? Grappling with the horrible things our ancestors did is an important part of growing up and establishing morals, but so is realizing that you can direct your own legacy — that you can be Rey Palpatine, and that your last name can come to mean something different than it used to, even if people grimace when they hear it.

I recently chose a new first name of my own. It fits me better than the one I was born with. There is a power to names, I won’t deny that. But there is also a power to self-definition, to realizing that what makes Superman Superman, what makes Rey Rey, is not the sadness of their origin stories, but everything that comes after.

Tom Steyer’s impeachment group is missing its big moment because he’s running for president
Verizon, T-Mobile, Sprint, and AT&T could be facing big fines for selling your location data
Why Tucker Carlson pretends to hate elites
Trump calls Europe “as bad as China” on trade
A brief guide to Andrew Wheeler, Scott Pruitt’s replacement at the EPA
Trump called for unity against political violence. He didn’t mention what he said last week.