The current hunger crisis in the US, in photos 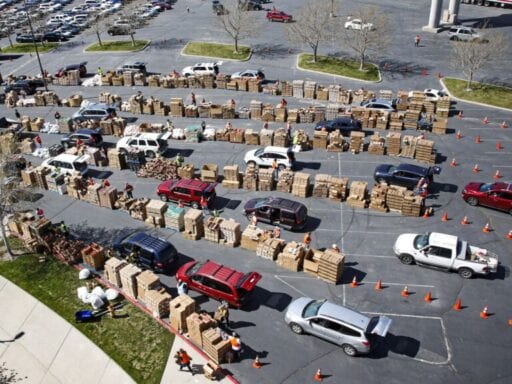 Food banks across the country have seen a staggering uptick in need since the onset of the pandemic.

Among the pandemic’s many dire effects: It’s making food insecurity in the US much worse.

In the past month, America’s food banks have been completely overwhelmed by demand. In cities like Pittsburgh, San Antonio, and Phoenix, residents have lined up for hours as food banks attempt to address a massive influx in need. Some organizations have been forced to turn people away while others are struggling to maintain the supplies necessary to keep up.

Staggering images of the lines at food pickup points underscore how devastating the economic fallout from the pandemic has been. These photos make visible what has already been a long-standing issue: In one of the richest countries on earth, millions still go hungry each day.

According to a 2014 Washington Post report, roughly 46 million people depended on food banks and meal service programs on an annual basis prior to the coronavirus pandemic. And in 2019, about 38 million people used the US Department of Agriculture’s Supplemental Nutrition Assistance Program (SNAP), according to the Center on Budget and Policy Priorities.

“Our city struggled before Covid — many … families [are] living on the edge — and Covid knocked them over the edge,” says San Antonio Food Bank President Eric Cooper.

The spike food banks are experiencing now is unrivaled in modern history, and the images of thousands queued up to receive basic necessities throw the effects of the recent economic downturn into sharp relief.

Thirty million people have filed for unemployment insurance in the last six weeks. As families scramble to cover rent, mortgage payments, and health care costs amid job losses, their funds for necessities, including food, have run short. And while SNAP helps provide food aid, the amount of funding it includes for families often isn’t enough — even when the economy is in great shape.

Jennifer, a 28-year-old in Newark, New Jersey, who’s been laid off from her job at a nail salon, said she’s applied for SNAP and attempted to go to a regional food bank with her family. “The experience was hectic, unorganized, and packed to the brim,” she told Vox, noting that the pantries in her area have been fully at capacity.

According to NBC News, Feeding America, which includes a network of roughly 200 food banks in the US, projects that it will see an additional 17 million people coming to its locations in the next six months.

“What’s been so challenging for food banks is that we’ve had this really dramatic and heartbreaking increase in need,” says Leslie Bacho, CEO of Second Harvest of Silicon Valley. “50 percent of people haven’t gotten help before.”

Bacho estimates that the organization is serving roughly 100,000 more people than it was pre-pandemic. Cooper, the president of the San Antonio Food Bank, notes that the nonprofit’s sites went from serving 60,000 people a week to 120,000 a week. And Anna Kurian, senior communications director at the North Texas Food Banks, says they’ve distributed 6 million pounds of food in about a month, compared to 1.5 million pounds in the prior two months.

The overwhelming demand for these resources is emblematic not only of how severe the economic impact of the coronavirus has been but also how tenuous the country’s social safety net is.

Many of the people going to food banks are either ineligible for SNAP or relying on food banks to supplement the SNAP support they receive. Congressional Democrats have argued that the current crisis demands an expansion in SNAP benefits, much like the one that was implemented in the 2009 Recovery Act, to help tide people over until the economy recovers.

Because of the gaps that currently exist in both SNAP and other government stimulus efforts, however, food banks are being relied upon for the time being to manage an unparalleled wave of need.