The dark side of going viral 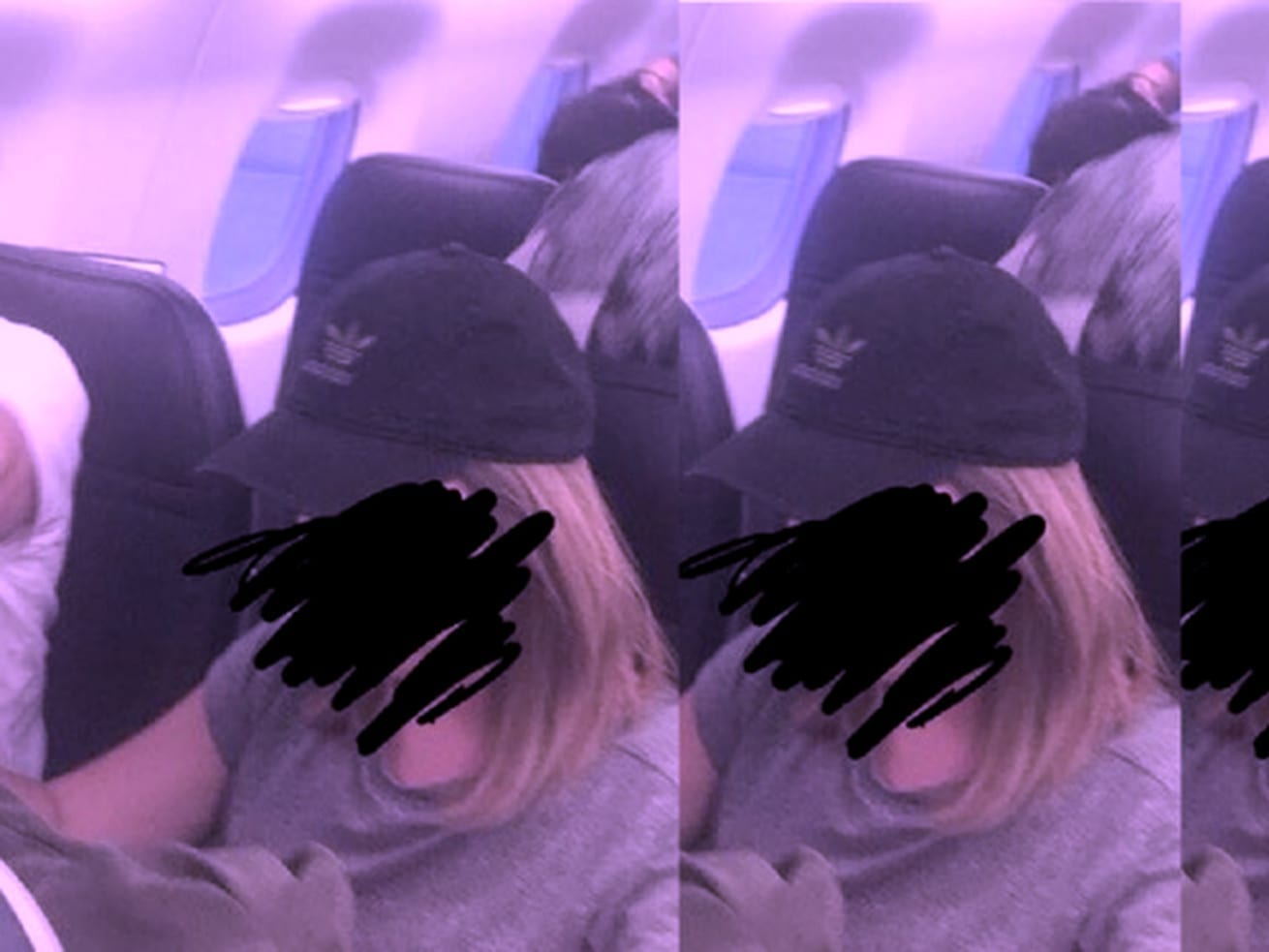 The airplane internet romance Plane Bae, my own viral hell story, and the death of privacy.

Last week, an actress and photographer, Rosey Blair, asked to switch seats with a woman on a plane from New York to Dallas so that she could sit next to her boyfriend. Blair proceeded to live-tweet as she observed the woman and her new seatmate chat and eventually start flirting, discussing their mutual love of working out and subtly touching elbows, all details captured and posted by Blair. Her thread went mega-viral, racking up 900,000 likes, getting picked up by national news outlets and earning Blair thousands of new followers.

Many initially thought the story was adorable, even if others found it creepy and intrusive. Then the incident took an even darker turn.

An online hunt began to find the identities of the couple, now identified by the hashtag #PlaneBae. The man, a former professional soccer player named Euan Holden, embraced the media circus, but the woman, uncomfortable with the newfound spotlight, hesitated. That didn’t stop the online mob from tracking her down. She began receiving crass, sexually explicit messages in the comments of her personal Instagram profile.

She deactivated her social media accounts and declined an invitation to go on the Today show. Blair and Holden appeared without her. No one asked her if she had any reservations or concerns about being made part of a viral story. All she did was board a plane and chat with her seatmate. Now she is a public figure, a hashtag, and a target. Millions of strangers on the internet want to know about her personal life.

My own viral hell story

The erosion of the division between public and private has been coming for a while now. Maybe it started with reality television and the dramatic storylines broadcast to millions about people just like you falling in love. (Though those people willingly signed up to become public figures.) Maybe it was already in the works before then: People have always turned other people’s lives into public spectacle regardless of their will.

When I was 22, I wrote my first paid article for a publication on the internet. My essay, written under my own name, was about what it was like to date with genital herpes. I expected maybe a few thousand people to read it on the Women’s Health website; it wasn’t even going in the physical magazine. At the time, I was an intern at a media company, less than a year out of college, and my only brush with fame was as a 13-year-old writer of moderately popular Harry Potter fanfiction.

The herpes article went viral. Not just “few thousand retweets” viral — I mean invitations to go on daytime television viral. Two days after my essay went up on Women’s Health, I was featured in a trending article on the Washington Post website. It was aggregated from there on Yahoo, Jezebel, and eventually even The Daily Mail, where an enterprising staffer tracked down my private Facebook profile and raided it for photographs to use in their article.

There I was, smiling brightly in a picture my mother had taken as my father blew out his birthday candles. Of course, they cropped my father out, leaving me grinning and alone as hundreds of Daily Mail readers wrote comments underneath attacking my character. This slut, this shameful whore. She should kill herself for having an STI.

The next year I would find myself at the center of a new controversy when Genius, a well-funded startup that mostly writes annotations on song lyrics, launched a new tool allowing their users to annotate any website, anywhere. I wrote a blog post detailing why I thought the product was unethical, as it ignored the consent of the website creator and let strangers essentially scrawl graffiti on our intellectual property. I was also concerned it would be yet another tool in the hands of abusers, stalkers, and harassment mobs to come after me on my personal blog; since going viral, I had spent a year receiving horrifying sexual emails from strangers.

Sam Biddle, writing for Gawker, found my case unconvincing. His argument boiled down to my status as a public figure. “It’s brave and noble of Dawson to publicly try to combat the stigma of STD infection,” he wrote. “But when she writes ‘we need more voices to challenge the single narrative of herpes,’ she’s already acknowledging her place in public—it’s right there in the ‘we.’ If you want to advocate for a cause in front of an audience (and judging by the fact that her website has a ‘Press’ section, I’m assuming she does), you have to take what comes with it. Dawson says she has a blog ‘to have total control of how I write and who interacts with me.’ If only this were possible! Unfortunately, this is a fantasy, and will always be so.”

Chelsea Hassler, writing for Slate, argued the contrary position: That as a blogger with a few articles published, I was not someone who rose to the level of a “public figure.” I was an individual, an amateur. She wrote, “There’s a substantive difference between critiquing the work of a professional journalist or blogger and critiquing the writing of an individual who is using her blog as an outlet to communicate with other likeminded people.”

People like me pose a challenge to traditional understandings of the public-private divide. I write about my personal life, and sometimes I get paid to do so. I have fewer than 20,000 followers on Twitter. I’ve had a handful of short stories published in anthologies by indie houses and my blog has steady traffic, but I don’t have a Wikipedia page. Would you consider me a public figure? At what point did I become one? Would it change your mind if I told you I’ve never wanted to be one?

I don’t think there is any such thing as a “private person” anymore. The vast majority of us constantly groom our internet presence, choosing the right filter on Instagram for our brunch and taking polls of our friends about our next Facebook profile picture.

We don’t think about this as a public act when we have only 400 connections on LinkedIn or 3,000 followers on Tumblr. No one imagines the Daily Mail write-up or the Jezebel headline. We actively create our public selves, every day, one social media post at a time. Little kids dream of becoming famous YouTubers the same way I wanted to be a published author when I was 12.

But there are also those of us who don’t choose this. We keep our accounts locked, our Instagram profile set to “friends only.” Maybe we learned a lesson when a post took off and left the safe haven of our community, picked apart in a horrifying display of context collapse by strangers who we didn’t intend to speak to. Maybe we are hiding from something: a stalker, an abusive ex, our family members who don’t know our true queer identity. To some of us, privacy is vital.

A woman boarded a plane in New York and stepped off that plane in Dallas. She chatted with a stranger, showed him some family photos, brushed his elbow with her own. At no point did she agree to participate in the story Rosey Blair was telling. After the fact, when the hunt began and the woman took no part in encouraging it the way Holden did, Blair tweeted a video in which she drawled, “We don’t have the gal’s permish yet, not yet y’all, but I’m sure you guys are sneaky, you guys might…” And her followers did not disappoint.

When people called Blair out for this blatant invasion of privacy, she blocked them. Because she, apparently, wanted to control her own boundaries. Later she tweeted about wanting a job at BuzzFeed.

I don’t know what the woman on the plane is thinking or feeling. I don’t know if she’s afraid or angry or mildly amused but inconvenienced. But I know how it feels to see strangers scrawling obscenities on social media accounts and email inboxes you once considered safe, commenting alongside your friends and family members. I know the sour humiliation of knowing everyone in your life can see that strangers have written about you — your parents, your co-workers, your exes.

Even when the attention is positive, it is overwhelming and frightening. Your mind reels at the possibility of what they could find: your address, if your voting records are logged online; your cellphone number, if you accidentally included it on a form somewhere; your unflattering selfies at the beginning of your Facebook photo archive. There are hundreds of Facebook friend requests, press requests from journalists in your Instagram inbox, even people contacting your employer. This story you didn’t choose becomes the main story of your life.

There is no opting-in, no consent form, no opportunity to take it all back. It feels like you are drowning as everyone on the beach applauds your swimming prowess. What do you have to complain about? Why wouldn’t you want publicity?

It’s clear that to Blair, the violation of this woman’s privacy is less important than Blair’s growing platform and ambition. It is not a romantic comedy for the digital age. It is an act of dehumanization.

A friend of mine asked if I’d thought through the contradiction of criticizing Blair publicly like this, when she’s another not-quite public figure too. But Blair is not just posting about her own life; she has taken non-consenting parties along for the ride. While Blair uploads gorgeous Instagram photos to celebrate her body on her birthday (I say this genuinely: You go, girl), the woman on the plane has deleted her own Instagram account after receiving violent abuse from the army Blair created. As the content creator of this media circus, Blair is responsible for the behavior of its fans. When faced with the opportunity to discourage their privacy violations, she has done the opposite: “I’m sure you guys are sneaky.”

Ella Dawson is a sex and culture critic whose writing has been published by ELLE, MTV, Women’s Health, and more. Find her at elladawson.com and on Twitter as @brosandprose.

Vox Sentences: The far-right White House guest
What to do if you’re over 70 and running for president in a coronavirus outbreak
Trump falsely claims coronavirus is “disappearing” and Russia isn’t meddling in the 2020 election
Mick Mulvaney says Trump is actually prepared to let the government shut down again
Disruption has come for toilet paper
Immigrant advocates want Iowa voters to remember kids in cages