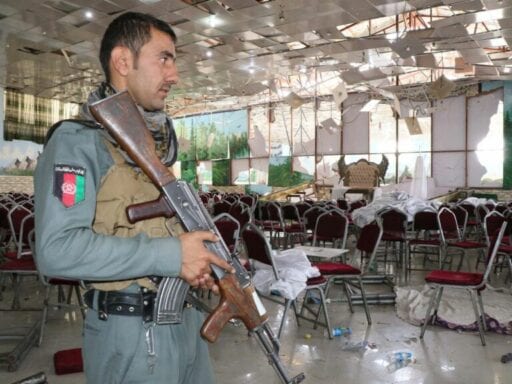 Share
Loading...
An Afghan security official keeps watch over the hall attacked by a suicide bomber during a wedding on August 18, 2019. | Haroon Sabawoon/Anadolu Agency/Getty Images

US-Taliban peace talks are nearing their conclusion, but a terror attack in Afghanistan’s capital that killed at least 63 people gives credence to critics who claim the deal will be a disaster for Afghans.

A suicide-bomb blast killed at least 63 people at a wedding party in Kabul on Saturday night, and injured 182 more.

It was the most lethal attack in Afghanistan’s capital this year, and it comes at a sensitive time: the US and the Taliban are in the final stages of negotiating a deal that would allow the US to withdraw its troops from the country provided that certain security goals are met.

The Taliban denied responsibility for the attack and condemned it, and the local affiliate of ISIS claimed that it was behind the bombing.

The president of Afghanistan, Ashraf Ghani, however, said that he believed Taliban insurgents were culpable on some level.

“Taliban cannot absolve themselves of blame, for they provide platform for terrorists,” he tweeted after the attack. He also called for a day of mourning.

More than a thousand guests had gathered for the wedding, and both the bride and groom lost dozens of family members and friends. The groom told a local television station: “My family, my bride are in shock, they cannot even speak. My bride keeps fainting.”

According to the New York Times, the wedding hall is in an area in West Kabul in which ethnic Hazaras, who are predominantly Shiite, live. ISIS has repeatedly attacked that neighborhood with suicide attacks in recent years.

Could this complicate the US-Taliban deal?

While ISIS has claimed responsibility for the attack and the Taliban have condemned it, not all Afghans are convinced that the Taliban’s hands are clean.

“They are responsible in the eyes of Afghans. They have turned a country of 30 million people into a slaughterhouse,” Tabish Forugh, an Afghan journalist, said of the Taliban after the attack, according to Reuters. “We should not surrender to Taliban terror.”

“Who else is capable of carrying out such brutality?” she tweeted after the attack. “So ‘peace agreement’ with the Taliban isn’t going to end the bloodshed for ordinary Afghans?”

Doubt about the honesty of the Taliban could potentially complicate the finalization of a US-Taliban deal intended to make the US’s withdrawal from Afghanistan as smooth as possible.

The premise for the deal is that the US will begin a phased withdrawal of troops from Afghanistan if the Taliban agrees to cut off all ties with extremist Islamist groups and prevent them from operating in territories that they control in Afghanistan. The deal is also meant to create a framework for a ceasefire and peace talks between the Taliban and the national government.

However, Afghanistan’s government has not been involved in negotiating the agreement, and the deal as currently drafted does not grant the Afghan people any protections from Taliban attacks. Critics, including military officials and congressional Republicans, have argued that in having failed to extract a commitment of protection from the Taliban, US negotiators are leaving innocent people to die.

And while the Taliban have claimed they are not responsible for Saturday’s wedding attack, they have claimed responsibility for a number of other recent, deadly attacks, many of which were carried out as the organization was negotiating with the US. In July, for instance, the group took responsibility for the bulk of 1,500 Afghan civilian casualties wounded or killed in terror attacks, and in early August, Taliban operatives killed 14 people and wounded 145 others in Kabul.

Despite this, President Trump has continued to push for a deal, hoping to withdraw all US troops from Afghanistan before the 2020 presidential election.

The US originally invaded Afghanistan 18 years ago because the Taliban gave safe haven to Osama bin Laden in the run-up to the 9/11 attacks. While the US was able to topple the Taliban government, it has never been able to fully quash the fundamentalist movement. Now the US is trying to find a compromise with them and find a way to withdraw while minimizing future security risks for US interests.

In order for the deal to work, the US needs to believe that the Taliban won’t covertly back or turn a blind eye to terrorists in Afghanistan. Critics of the deal say this is exactly what will happen once the US leaves the country, and attacks like the wedding blast will only serve to weaken the argument of those in the White House who say it will not.

For now, however, preparations to conclude the talks continue, and the deal is expected to be completed within the next week, ahead of an informal September deadline.