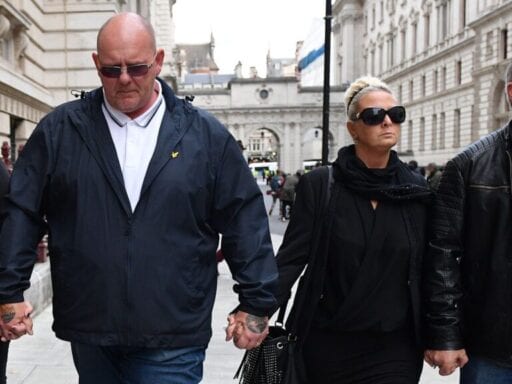 Share
Loading...
Charlotte Charles (R) and Tim Dunn, parents of teenage motorcyclist Harry Dunn who was killed in a collision with a car, leave after a meeting with Britain’s Foreign Secretary and First Secretary of State Dominic Raab at the Foreign and Commonwealth Office in central London on October 9, 2019. | DANIEL LEAL-OLIVAS/AFP via Getty Images

The wife of an American official was involved in a crash that killed a teen. She fled back to the US — setting off a diplomatic dispute.

Harry Dunn, a 19-year-old British man, was killed in a crash with a Volvo while riding his motorcycle in Northamptonshire, England, in late August.

Dunn died close to the Royal Air Force Croughton, which is a US military base. According to CCTV, the Volvo was driving on the wrong side of the road when it struck Dunn on his bike. The driver of the Volvo was later identified as 42-year-old Anne Sacoolas, the wife of an American diplomat stationed at the base.

President Trump has called Dunn’s death a “terrible accident,” while also suggesting Britain’s roads are to blame. “You know those are the opposite roads, that happens,” he told reporters last week. “I won’t say it ever happened to me, but it did. When you get used to driving on our system, and then you’re all of a sudden on the other system when you’re driving, it happens.”

But on Wednesday, Trump apparently decided to personally intercede in the dispute — though he did so in way that’s only managed to make the case even more strange. On Tuesday, Dunn’s parents, Charlotte Charles and Tim Dunn, received an invitation to the White House to meet with a senior official. When they got there, they discovered the meeting was with Trump himself — who told them Sacoolas, the woman allegedly involved in the crash, was in the White House and wanted to meet them, too.

Trump, according to what sources told the Washington Post, wanted to orchestrate a “hug and make up moment.” A spokesperson for Dunn’s parents said they felt “ambushed” by the request, and declined to meet with Sacoolas in what looked like an attempt to arrange a photo op.

Trump said later Wednesday that he had tried to organize the meeting at the request of Johnson. The prime minister’s office did not comment.

The White House encounter has only made the case more complicated — and still fails to resolve the essential problem, which is that Sacoolas refuses to return to Britain to cooperate with the investigation.

Her actions have also raised questions about the use of diplomatic immunity in a case such as this, and have turned one teenager’s tragic death into an awkward back-and-forth between the US and the UK that doesn’t look as though it’s going to be resolved any time soon.

On August 27, Dunn was riding his motorcycle near the RAF Croughton, a US Air Force communications station, in Northampshire when a car struck him. Dunn died of his injuries the next day.

According to police, video showed “a black Volvo XC90 driving towards the village [that] collided head on with a black Kawasaki motorcycle.” According to reports, the motorist — later identified as Sacoolas — had just pulled out of the base on the wrong side of the road, leaving no time for Dunn to avoid a collision. Sacoolas is married to Jonathan Sacoolas, a US diplomat who’s been characterized as a “spy” in the British press. She had been in the UK for just three weeks at the time of the accident.

Sacoolas originally began cooperating with the investigation, according to officials and Sacoolas’s lawyers. “Anne stayed on the scene of the ­accident to assist. She spoke to Harry to tell him that she would call for help,” her lawyers told the Guardian. “She waved down another car. That driver offered to assist Harry so that Anne could comfort her young children in her car.”

Sacoolas, police say, told authorities she had no plans to travel; but she ended up leaving the UK and returning back to the United States, citing diplomatic immunity under international law. On September 5, the UK formally requested the US waive diplomatic immunity for the diplomat’s wife, but the US embassy in London turned down the request, according to the New York Times.

Dunn’s parents demanded answers, and media attention soon led some to question Sacoolas’s ability to claim diplomatic immunity. Such immunity is granted by the 1961 Vienna Convention on Diplomatic Relations, though the principle of diplomatic immunity has existed far longer than that in international relations.

The Cold War-era convention gives broad protections to both diplomats and their families, spouses and kids included. It’s meant to protect diplomats who might be working abroad in hostile environments. Both the US and the UK are party to the treaty.

There were initially some questions as to whether Jonathan Sacoolas qualified for diplomatic immunity himself, but UK officials told the Guardian that the RAF Croughton base was treated as an “annex” of the US embassy. And the US rarely waives diplomatic immunity.

But Dunn’s parents, local police officials, and top British government officials have been urging Sacoolas to return to the UK to cooperate with the investigation.

UK Foreign Secretary Dominic Raab brought up the issue with US officials — including Secretary of State Mike Pompeo — asking them to reconsider their position on immunity. Prime Minister Boris Johnson also said last week that he would take up the matter with Donald Trump.

“I do not think that it can be right to use the process of diplomatic immunity for this type of purpose,” Johnson told the BBC last week. “And I hope that Anne Sacoolas will come back and will engage properly with the processes of law as they are carried out in this country.”

He added that “if we can’t resolve it then of course I will be raising it myself personally with the White House.”

Trump was asked about the status of the case in a meeting with reporters last Wednesday. “The person that was driving the automobile has diplomatic immunity. We’re going to speak to her very shortly and see if we can do something where they meet,” he said, after his comments about the UK having “opposite roads” — apparently a reference to the fact that motorists in the UK drive on the left side of the road instead of the right, as is common in most other countries, including America.

It seems that Trump may have just gone a teeny bit off-script here, as Washington Post photographer caught a glimpse of Trump’s notes, where he was supposed to say that Sacoolas would not be returning to the UK.

Meanwhile, the Dunn family continued to express their frustration at both the British and UK governments.

Then, on Sunday, Raab wrote to Dunn’s parents to say that now that the woman was back in the United States she no longer qualified for diplomatic immunity. “The U.K. Government’s position is that immunity, and therefore any question of waiver, is no longer relevant in Mrs. Sacoolas’s case, because she has returned home,” Raab wrote, per Sky News.

Raab added that the US agreed and that the case was now in the hands of the local police and the Crown Prosecution Services, England’s prosecutors. Essentially, this means that the UK could ask for a formal extradition of Sacoolas if she’s charged with a crime.

Of course, it’s not clear whether the UK will push for extradition if Sacoolas is charged, or how the US would respond.

But all this was also before Trump got personally involved.

This weekend, Dunn’s parents flew to the United States to try to lobby their case here. On Tuesday, Radd Seiger, a spokesperson for the family, said Dunn’s parents had received an invitation to the White House. They told CBS News on Wednesday that, at the time, they were just told they were meeting with a senior official.

It turned out the meeting was with President Donald Trump. Dunn’s mother, Charlotte Charles, said that Trump “seemed warm and welcoming,” but that he’d then surprised them with the news that Sacoolas was in the White House and wanted to meet.

“He did ask two or three times,” Tim Dunn, the victim’s father, said, adding: “It was a bit of pressure, but we stuck to our guns.”

But somehow it all got even stranger. According to the lawyer for Charles and Dunn, National Security Adviser Robert O’Brien and Trump both suggested that Dunn’s family meet Sacoolas in front of the White House press corps for what would essentially be a big photo op.

A lawyer for Sacoolas told CBS News she was invited to the White House but wasn’t aware of the circumstances. (Sacoolas had previously said, through an attorney, that she wanted to meet with the family to express her “deepest sympathies” and “apologize.”)

Later, the spokesperson for Dunn’s parents said that they’d felt “ambushed” by the president’s request.

Trump, defended his actions on Wednesday, saying he had called the meeting at the suggestion of Boris Johnson. “They weren’t ready for it,” Trump said. “But I did offer. I spoke with Boris. He asked me if I’d do that. And I did it.”

Trump added that his meeting with Dunn’s family was “beautiful in a certain way” and expressed condolences to the family “on behalf of the country.” He once again seemed to blame the different driving systems for the crash.

Trump on meeting w/family of teen killed in the UK by wife of a US diplomat in an auto accident: “My meeting w/the family was really, uh, beautiful in a certain way … it was very sad. They lost their son. I believe it was going down the wrong way, b/c that happens in Europe.” pic.twitter.com/tRFDpfEHTY

The awkward meeting at the White House will likely do little to resolve the central tension on the case, which is whether Sacoolas will return to the UK to face justice.

Still, it’s a reminder of Trump’s penchant for personalized diplomacy, which, in this case, seems to have backfired badly.

This is also a diplomatic spat that the UK and the US would probably like to avoid right now. The “special relationship” between the UK and US has experienced a few hiccups in the past year, most notably after a batch of diplomatic cables was leaked in which the UK Ambassador to the US Kim Darroch described the Trump administration as “inept” and said that, despite being president, Trump “radiates insecurity.”

Now the question is whether Trump’s half-baked attempt at mediation in this will strain relations even further.

And none of it helps Dunn’s family, who are still seeking justice. “If I’m totally honest,” Charlotte Charles, Dunn’s mom, said, “I don’t hold out too much hope that [Sacoolas is] going to be returned to us.”

How a year of publishing protests rocked the industry
Want to help animals? Here’s where to donate your money.
Ballot selfies, state by state
Vox Sentences: California, burning in the dark
Fare evasion costs cities millions. But will cracking down on it solve anything?
The post office arrested Steve Bannon. Yes, the post office can arrest people.