The debate over Bridgerton and race 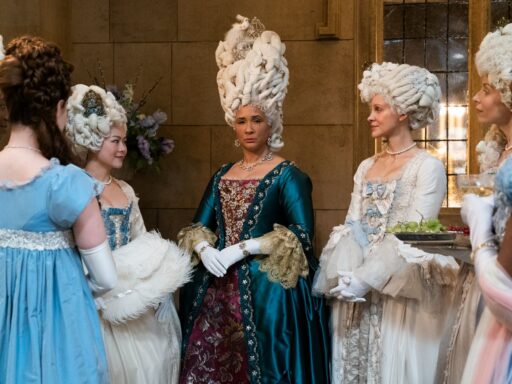 Bridgerton wants to have Black characters while handwaving the reality of racism. Should it?

Like the prim society debutantes at its center, Bridgerton, Netflix’s new, sumptuous historical romance series produced by Shonda Rhimes, has proven to be as controversial as it is popular.

Based on a romance series by Julia Quinn and helmed by showrunner Chris van Dusen, Bridgerton is reportedly a solid hit so far: Netflix said that holiday streaming drove it to become the platform’s fifth most-viewed original series to date.

Bridgerton initially drew mostly rave reviews from critics who praised the show’s “feminist undertones,” marathon-ability, and “frothy, silly escapism.” As a longtime reader of historical romance, I frankly found much of this initial praise of Bridgerton to be coated in condescension toward the romance genre. Many of the TV critics who liked Bridgerton framed it as silly, raunchy, overheated escapism, and seemed to be operating within the assumption that romance fiction is only frothy and unserious by default — never something that can have serious artistic merit, capable of delivering profound views of society.

Yet Bridgerton has seen something of a reappraisal post-release. Since the show’s premiere, the response has transformed into something more considered. Some have begun to question the show’s approach to one non-consensual sex scene, while most zeroed in on the show’s tricky handling of race. Bridgerton is almost — but not quite — an alternate historical universe, one where a colorblind view of society prevails. But it doesn’t always stick to this conceit, and that inconsistency has clearly complicated interpretations of the show.

Particularly, early rounds of praise for the show’s diversity have given way to arguments that the show handles race clumsily. The series features a mixed cast of white and Black actors in prominent roles. Yet the Observer’s Carolyn Hinds noted that “the characters’ race is practically ignored for almost the entire show.”

“The majority of the speaking roles belong to the white actors,” she pointed out. “Consciously or not, Van Dusen’s creative team gave almost all of the Black characters with speaking lines negative attributes and beliefs that place them at odds with the white main characters. … Is Bridgerton even that progressive?”

These evolving critical analyses of the show reflect very different ways of looking at the show. And those approaches, in turn, affect how we “read” Bridgerton as a cultural text — especially when we examine its handling of race.

Bridgerton is almost an alternate universe. But there’s a lot to unpack in that “almost.”

You could be forgiven if you watched Bridgerton and thought, as I did up until mid-way through its 10-episode season, that the show was entirely a historical alternate universe (AU). That’s because Bridgerton appears — at first — to have tossed out historical fact in favor of putting a Black queen, the real-life consort Queen Charlotte (Golda Rosheuvel), in charge of London society. This is a casting choice that leans into recent arguments by historians that Queen Charlotte, wife of George III, may have actually been Black.

It’s possible to start out believing that Bridgerton is an alternate fantasy version of history, in which a magnificent Black queen sat solo on the British throne and handed out dukedoms like candy to former slaves, soldiers, and merchants of color. The show conveys this deliberately skewed fantasy early on, through motifs like string quartets playing Ariana Grande covers instead of period waltzes, and the use of a Gossip Girl-esque scandal sheet narrator, Julie Andrews. To some extent, tongues are kept firmly in cheek.

As Lorraine Ali wrote for the Los Angeles Times, “Historians and Jane Austen purists may take offense, but this well crafted, escapist drama — where orchestras play covers of Ariana Grande and Billie Eilish hits — is not meant for them.”

You might assume, then, that in such a universe, society has a genuinely colorblind structure, and that most of the men and women we meet over the course of the show start out on more or less equal footing, regardless of their skin tone. This is, at least, the alternate historical world that Bridgerton’s creative team seems to have wanted to depict.

“With color-conscious casting, I get to exist as a Black person in the world,” Regé-Jean Page, who plays the show’s dashing romantic lead, Simon, told Entertainment Weekly. “It doesn’t mean I’m a slave. It doesn’t mean we have to focus on trauma. It just means we get to focus on Black joy and humanity.”

Noble as Page’s description sounds, Bridgerton arguably never really develops most of its Black characters, and certainly rarely bestows joy on most of them. What’s more, halfway through the season, Bridgerton upends the entire idea that it’s an alternate history with an abrupt, disconnected scene, in which we realize that Charlotte is not the solo reigning British monarch. She is, in fact, merely the Queen consort, as she was historically, and has been married the whole time to her real-life husband George III, whom she has been struggling to deal with ever since he succumbed to his famous porphyria-induced “madness.”

This revelation immediately complicates the entire show (and not just because it never explains where on Earth the Prince Regent went). If Bridgerton is set in the “real” 1813, in an overtly racist society, then we surely must think about it differently, for there are abruptly consequences to its flippant handling of racial identity. As Hinds and other critics pointed out, the show also explicitly references slavery — so the “fantasy” of this 1813 is still anchored in the reality of systemic prejudice.

“You can’t say race isn’t of consequence when the world these characters inhabit was created in part through racism,” Hinds argued. “Yes, slavery exists in this world, so how could race not matter? Having Black people strolling around in the background doesn’t erase that, and it’s not enough.”

Is Bridgerton’s failure to handle its racial issues a failure of fantasy?

Most of the characters of color in Bridgerton’s main ensemble suffer from a lack of both interiority and context outside of their relationships to white characters. Among them, only Simon and his mentor Lady Danbury (Adoja Andoh) seem to have fully settled into society. But even here, Bridgerton is conspicuously light on details. Lady Danbury’s entire character motivation is essentially packed into one speech about her determination to rise through society — and while it’s a great speech, it’s hardly enough to contextualize her role, or how she manages to maneuver so effortlessly among a social circle full of manipulative white people.

Our hero Simon gets plenty of screen time, but his characterization is patchy. Other characters make reference to his mysterious years of travel abroad, vague experiences from which he seems to have returned fully formed and in command of his fate. But apart from glimpsing his formative childhood trauma, we see nothing of the turning points in his life. Simon’s best friend Will, a boxer, is essentially just there as a device to fuel one white family’s narrative and to remind Simon of his (mysterious) ties to the working-class Black community.

Another Black character, Marina, has a major storyline, but she, too, is ultimately placed in the story solely to further the narrative of white characters. (In fact, in the original novel series, Marina is an entirely offstage minor character who’s so disposable that she conveniently commits offscreen suicide.) Marina’s story arc further serves as a commentary on white privilege, classism, and casual racism — but not in a way that ultimately feels meaningful.

If you’re wondering how well a storyline about white privilege works in a supposedly escapist colorblind fantasy AU, you’ve arrived at the crux of the debate surrounding Bridgerton: Is it effective to have a superficial acknowledgment of systemic racism in historical fiction that’s otherwise setting itself up as a fantasy? It is, in a nutshell, the Hamilton question — does historicity matter if the lack of historical accuracy is part of the point? — but this time applied to a story that is much less clear about what it wants to be.

Numerous critics have argued that the burden of an accurate depiction of history would be too unduly heavy for a lightweight story like Bridgerton to bear. Writing for O magazine, McKenzie Jean-Philippe argued, “Historical accuracy shouldn’t have to matter in a fantasy,” and that “it was … a welcome breath of fresh air to not be faced with exhaustive on-screen dialogue about why my people deserve to be seen on a hit TV series.”

As sociologist Tressie McMillan Cottom points out, “historical fiction gets tricky when race is considered in the storytelling. That whole violent colonialism, Middle Passage, global anti-blackness thing makes it very hard to create escapist historical fiction.” Bridgerton, she argues, presents its escapism in a way that is still “substantive enough to keep a Black viewer in the story world without nagging questions pulling them out.”

But not everyone agrees that the show lacks “nagging questions.” Indeed, after watching Bridgerton, I concluded in my review that “its most interesting ideas — like Simon’s precarious place in society as a duke of color or his mysterious time abroad — get almost no attention.” Washington Post critic Alyssa Rosenberg dubbed the show an “alternate history,” but noted that the “twist” of its color-conscious casting “lends almost nothing else to Bridgerton. … Telling us that the show is presenting a daring exploration of race and class is not the same as actually making it so.”

Ultimately, whether you think Bridgerton is satisfactorily race-conscious or not boils down to the way you read the show itself. Viewers who read the show as consciously escapist are more likely to see its use of Black characters as fitting within an escapist milieu — racism is vaguely acknowledged, but not enough to encroach upon the fantasy of a history in which Black communities could leverage social power and climb to the heights of the aristocracy.

And then there are viewers like me, who expected Bridgerton to ground itself more thoroughly in the world it actually presents, with its real classism, prejudice, misogyny, and high-stakes ballroom maneuvers. In this version of Bridgerton, the inclusion of racially conscious casting becomes a convenient mechanism by which racism as a theme can be duly eliminated — a move that undermines much of the show’s other attempts at seriousness. Either Bridgerton is set in our world and duly flubs its handling of racial identity, or it isn’t, and thus arguably gets a pass.

A cleverer show might have been able to bridge the gap between these two options, using more than just cheeky string quartets and a missing prince to signal its intentions towards historical accuracy. But Bridgerton refuses to resolve these issues. And so, viewers who long for historical romances that are both frothy and serious, and taken seriously by audiences, are ultimately left in want.