The debate over whether to ban “virginity testing,” explained 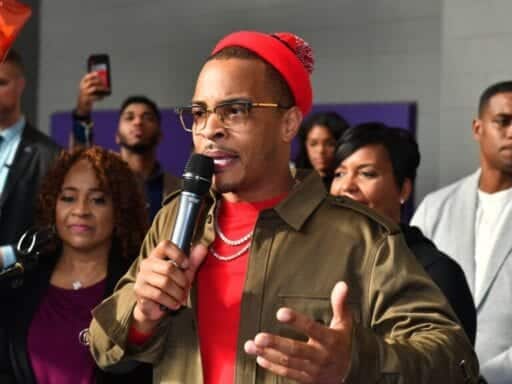 New York State is considering barring the practice after T.I.’s comments about his daughter.

The rapper T.I. sparked nationwide controversy last month when he said he takes his 18-year-old daughter to the doctor every year to check if she is a virgin. While he later said his comments had been misinterpreted, experts say “virginity testing” is a real thing that happens in the US. Now, one state is taking steps to ban it.

On a November episode of the Ladies Like Us podcast, T.I. described taking his daughter to a gynecologist after her birthday party to “check her hymen.” (A hymen is not actually a measure of whether someone has had sex since it can be broken during sports or other activities and a person can be born without one.) Examining someone to determine virginity is more than invasive; doctors say it can be painful and even constitute sexual assault if done without the patient’s consent.

Solages is calling on federal legislators to enact a similar ban: “We need to send a message to the world saying that this practice of virginity exams is unnecessary and that it should be deemed unacceptable.”

But some say that banning the practice isn’t the way to fix the problem. A ban could simply drive “virginity testing” underground, Dr. Ranit Mishori, a professor of family medicine at the Georgetown University School of Medicine and a senior medical adviser at Physicians for Human Rights, told Vox. While she agrees doctors should not perform such exams, she says a request is a chance to talk to patients about the many issues surrounding “virginity” and concerns around it.

Doctors around the country are being asked to test virginity. It’s not possible.

The issue of virginity testing started making headlines around the country after T.I. said on Ladies Like Us that he and his daughter, who is in college, “have yearly trips to the gynecologist to check her hymen.”

“Usually like the day after the party, she’s enjoying her gifts, I put a sticky note on the door: ‘Gyno. Tomorrow. 9:30,” the rapper continued, adding that, “as of her 18th birthday, her hymen is still intact.”

The response was swift, including from experts who pointed out that a doctor can’t actually determine if someone has been sexually active by examining the person’s hymen.

Hymens come in different shapes and sizes naturally, and can be broken by activities other than intercourse, Mishori said. There’s no medical evidence that examining the hymen tells a doctor anything about sexual history.

There are other methods of so-called “virginity testing,” including the “two-finger test,” in which a doctor inserts two fingers into the vagina to see how pliable it is, Mishori said. But this also has no basis in science.

In fact, there is no physical examination that can determine whether a person has ever had sex, Mishori said. And the entire concept of “virginity testing” is flawed because it doesn’t take into account the many kinds of sexual activity people can engage in. “You can have sex and it’s not just about an insertion of a penis into a vagina,” Mishori pointed out.

After his initial comments caused controversy, T.I. walked them back to some degree. In an interview later in November with Jada Pinkett Smith, the rapper said he “began to embellish and exaggerate” when talking about taking his daughter to the gynecologist and that listeners took his comments too literally. He also apologized to his daughter for discussing the subject publicly.

But beyond one family’s particular case, there is evidence that people around the country are asking doctors to test virginity. In a 2016 survey of OB-GYNs in the United States, about 10 percent of respondents said they had been asked to perform virginity testing, and 3.5 percent said they had done so.

Sometimes, requests for such testing come from parents, Mishori said. But sometimes they come from patients themselves, who may ask a doctor to “write a note” or otherwise provide proof that they are virgins.

Some types of virginity tests, like the two-finger test, can be painful, Mishori explained. And if a doctor performs the test without a patient’s consent — for example, because a parent or partner asks for it — that “could be a sexual assault and a violation of human rights,” she said.

If performed on survivors of sexual assault, the tests can be especially traumatic, the World Health Organization said in a statement last year. “Given that these procedures are unnecessary and potentially harmful, it is unethical for doctors or other health providers to undertake them,” the organization stated. “Such procedures must never be carried out.”

A proposed ban on the practice has some experts concerned

Solages, a member of the New York State Assembly since 2012 who has made gender equality a focus of her work, agrees with the WHO. When she heard T.I.’s comments, “I was completely appalled,” she said. “Whether he was sarcastic or serious, he endorsed the practice of hymen examination, and he kind of made it a kitchen table conversation.”

In response, she introduced a bill in New York State that would ban the practice. Under the measure, doctors who perform it could lose their medical licenses and, if it’s performed outside a medical setting, it would be considered sexual assault and prosecuted as a felony.

The bill already has bipartisan support and Solages is optimistic it will pass. “We’re just trying to send the message that young girls and women are not property, that they’re human beings,” she said.

She also called on federal lawmakers to ban the practice, in part as a way to set an example for other countries.

However, medical professionals have voiced concerns about banning the practice, arguing that it could essentially legitimize something that is a medical impossibility, according to the New York Times. “You can’t tell if someone is a virgin, so how can you ban something that is not possible?” Dr. Maura Quinlan, an associate professor of obstetrics and gynecology at Northwestern University, told the paper.

Moreover, “criminalizing something doesn’t mean that it’s going to go away,” Mishori told Vox. While she agrees that doctors should not perform virginity testing, she said a legal ban could cause families to go to people who are not medical doctors for such examinations, leading to potentially more painful and harmful procedures.

If someone does request such testing, she said, it’s an opportunity for a larger conversation between the doctor and the patient, perhaps involving family members as well. The doctor can explain that virginity cannot be medically tested, and can also ask questions to make sure that the patient is safe from abuse or coercion, Mishori said. For example, “What happens if the person is not going to undergo this requested test?” And if the person has had sex, “What would happen to them if this were to be disclosed?”

For a doctor, a request for a virginity test is a chance to “try to elevate the discussion into something that’s a little more evidence-based,” she said.

Despite the difference of opinion around legislation, though, many agree that more public attention paid to the concept of virginity testing is a good thing. “We need to make sure that we pull this topic out of the shadows,” Solages said.

As for T.I.’s role, Solages noted that while he may have walked his comments back, he’s never come out and said virginity testing is wrong. “I invite T.I. to come to Albany and help me pass this legislation,” she said.

A former Secret Service chief explains how the government catches bomb makers
One Republican senator’s revealing explanation of where the party stands on Brett Kavanaugh
Paul Krugman on climate, robots, single-payer, and so much more
A pivot from tech to empowerment at bra startup ThirdLove
Democrats push for $25 billion for the Postal Service. The White House says it will reject it.
The biggest lie in Trump’s State of the Union speech