The decline of the suit 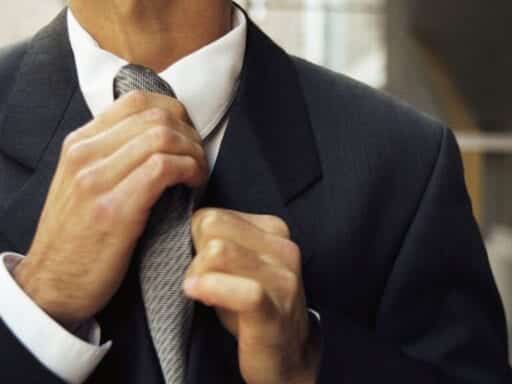 The suit was once the uniform of the powerful and a requirement for every man. Now, people mostly wear suits when they’re in trouble.

In April 2018, Mark Zuckerberg made a rare public appearance wearing a suit. Congress had compelled him to testify on Capitol Hill, the lawmakers curious why Facebook had been so adept at harvesting personal data and so inept at policing Russian spies.

Zuckerberg’s suit was navy and his tie was bright blue, a shade or two lighter than Facebook’s color scheme. The New York Times called it his “I’m Sorry Suit” and, like many outlets, praised his appearance and poise. He was lauded for a “strategic” decision to make a visual statement of contrition.

Had he? Or was he in a suit because Congress had dictated the terms for him? For one of the few times in his adult life, sweating through a barrage of government questions, Zuckerberg was not in control. And these days, when you are not in control you wear a suit.

“They put Mark Zuckerberg in that suit,” says Deirdre Clemente, a fashion and culture historian and author of Dress Casual: How College Students Redefined American Style, referring to Congress. “I would’ve had a lot more respect if he showed up in a hoodie: ‘This is who I am and what I do.’”

Although the suit is historically associated with projecting elegance, authority, and mastery of a profession, those qualities hearken back to the days when suits were prevalent, worn by the Atticus Finches and Don Drapers of the world. How long until we realize the suit — while still used for special occasions and by a shrinking number of traditionalists — has become associated with the opposite? The suit has become a uniform for the powerless.

There are exceptions. Women celebrities have recently donned suits in glitter and velvet and purple, modernizing a Marlene Dietrich staple, and the suit is an important component of non-binary clothing trends. Those choices are made to subvert expectations of the suit. But most people who wear suits are men. And they wear them because they have to please someone else, whether it’s an employer or Congress. Unless you live on Park Avenue, the suit brings to mind job interviews, junior salespeople, young employees behind the counter at Enterprise Rent-A-Car, hotel clerks, and court appearances.

When you’re in control, at least in relative control, from the C-suite down to the long rectangular table in the open-air office, you wear whatever you want, which is almost never a suit. It is the vest or bomber jacket for men, a blouse or a shell top for women. For people wealthy enough to attend wine country casual weddings, the male guests (and potentially the groom) can get by with light slacks and a button-down. At this year’s Oscars, the male celebrities who garnered the most headlines, like Chadwick Boseman, spurned suits for outfits that resembled dresses. JPMorgan lightened its dress code to business casual for most of its 237,000 employees in 2016. Goldman Sachs, the financial firm reputed to “rule the world,” nixed its suit requirement in March.

When you’re in control, you wear whatever you want, which is almost never a suit

The numbers alone suggest suits lack the value and influence they once had. The Consumer Price Index for suits in June 2019, according to the Bureau of Labor Statistics, was about 25 percent lower than in June 2000. This descent began well before the Great Recession and during a period in which the CPI for the general apparel market has declined 4 percent and risen since the financial crisis. The CPI, which measures the price paid by consumers over time, is considered a proxy for inflation, so a CPI decline is the opposite of what would be expected in an economy with high consumer confidence.

Americans are also buying fewer suits. US revenue for men’s suits declined to $1.9 billion in 2018 from $2.2 billion in 2013, according to the research firm Euromonitor (revenue for women’s suits tumbled in the same timeframe to $402 million from $795 million). The total number of men’s suits sold in 2018 was 8.6 million — or about .07 suits per man.

Compare this to the late 1940s. A board member of the National Clothing Manufacturers Association estimated back then that half a suit was bought per man per year, which would equal roughly 25 million suits. At the average price for a suit at the time, about $50, revenue would have been $1.25 billion. And that’s in 1940s money. Accounting for inflation, the market would have been $12.5 billion. And that’s for a United States that had half the adult male population the country has now. And — a final and — this board member suggested the industry needed to increase sales to one suit per man per year. The rate of half a suit per man, he said, “should cause us to hang our heads in shame.”

Yet even back then, the powerful had already started rebelling against the suit. Princeton students in the 1920s, according to Clemente’s book, experimented with blazers. In the 1940s, they started wearing khakis. These were the sons of America’s upper crust and they were pushing formal boundaries, especially in social settings.

“The guys who made [the standard] are the guys who killed it,” Clemente says.

Unlike what Tabler observed in the 1950s about the powerful men around town, Gen Z and whatever we’re going to call the generation being born right now won’t see high-status workers in suits, further reducing their cachet. “We’re so far from people … who grew up with examples [at] home and on TV and in media culture where going to work meant a suit and tie,” says Lauren A. Rothman, a fashion consultant for leaders, corporations, and politicians and author of Style Bible: What to Wear to Work.

Even at prestigious jobs, the people who wear suits can raise suspicion. Earlier this year in Dallas, attorney Christopher Kratovil was at the end of his laundry cycle and out of business casual garb. He had to make the awkward choice of wearing a suit to his corporate law firm on a day he didn’t have to appear in court. That day, one of Dykema’s partners pulled Kratovil aside and asked if he was interviewing for a new position at another firm. “She expressed genuine concern I might be thinking about or flirting with leaving,” he says.

In certain courts in England and Canada, lawyers must wear the white wigs favored by the likes of William Penn and George Washington, but they take them off as soon as they leave the courtroom lest the public see their ridiculous appearance. Kratovil believes the day will come when American lawyers look at suits like wigs and change out of them before re-entering the outside world. He wants that day to come, too, for the good of attorneys as much as the people they encounter. “(The suit) can create a stir. ‘Why are the guys in suits here? Has something gone wrong?’” Kratovil says.

“‘Why are the guys in suits here? Has something gone wrong?’”

The disappearance of the suit at the executive level has also possibly benefited women, according to Karen Pine, a fashion psychologist at Hertfordshire University in England. “In the past, women had to dress like men to reach senior positions in the workplace,” she has said. “Now they can dress as they like and assert their individuality through their work attire, without fear of bumping up against the glass ceiling.”

Tabler, though he still wears a suit to the office (he says he’d feel naked without one), mentions that younger male lawyers have perhaps moved beyond the suit because formal attire leaves them ill-equipped to handle expanded duties in their family life. That was a problem with the power suit. Physically and symbolically, it insulated men from work around the home.

But middle-class hotel clerks, salespeople, and job candidates cannot decide to ditch their suits the way tech workers, bankers, and lawyers have. “There’s a class element to it,” Clemente says. “In order to say I don’t have to wear a suit you have to be of a certain socioeconomic class.”

At the University of Nevada-Las Vegas, where Clemente is a professor, she sees at job fairs “baggy-ass black suits on skinny 19-year olds” who can’t afford anything else. “The suits are cheap; they look cheap. It’s one of these things in society, I wish we could just let it go,” she says.

Others suggest a correction is coming and suits will return in force. For one thing, there are signs of a recession. Recessions lead to unpredictability, and people seek comfort in old traditions, even expensive, uncomfortable traditions. After the 2008 financial crisis, Zuckerberg announced a goal of wearing a tie throughout 2009.

Rothman, who hopes the suit “doesn’t go to the mausoleum of where bad trends in life have gone,” has recently seen more upscale clients replacing casual dress with suits made of linen or paired with non-traditional colors.

To her, there was no more visible an instance of the power of a suit than the July Democratic presidential debates. She described the 20-plus Democratic hopefuls as the best-dressed group of candidates she had seen. “You’re not coming away wanting to make fun of Hillary’s suits or Bernie’s oversized jackets,” Rothman says.

Except these politicians weren’t in their usual positions of power. On national TV, trying to answer questions from CNN personalities in tidy soundbites, what were they doing but interviewing for a job?

Rep. Zoe Lofgren has been part of every modern impeachment. Here’s what she’s learned.
The Wing wants to fight gender bias in hiring by helping its members hire each other
Lizzo, Billie Eilish, and Lil Nas X lead the 2020 Grammy nominees
Trump’s executive order on campus anti-Semitism, explained
11 compelling documentaries to watch for this fall
Nearly half of Americans say they’ve been hit with a surprise medical bill