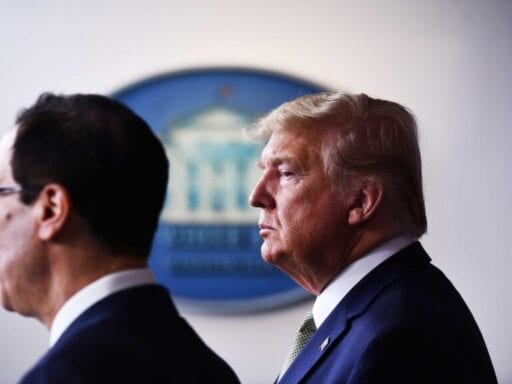 The invocation will allow the federal government to request that companies make needed medical supplies to treat Covid-19 patients.

As the United States ramps up its coronavirus response, President Donald Trump on Wednesday announced that he will be invoking the Defense Production Act, or DPA, in order to provide necessary medical equipment to treat patients.

“It can do a lot of good things, if we need it, and we will have it all completed, signing it in just a little while,” the president told reporters during a Wednesday press conference. “We have targets for certain pieces of equipment. We have targets for masks. … We need respirators. We need ventilators.”

This is what military and crisis response experts as well as top politicians have been pushing for as the outbreak spread across the country. The reason is simple: Invoking this act gives the president broad authorities to order domestic manufacturing industries to make products the nation needs in a time of crisis.

President @realDonaldTrump: “We will be invoking the Defense Production Act.” pic.twitter.com/yUsLbV9ri9

Since there are concerns about a dearth of masks, medical gloves, ventilators, respirators, and perhaps even hospital beds, it’s likely that those are what Trump will request of industry in America over the next few weeks.

The DPA was inspired by laws from 1941 and 1942 that gave the White House the ability to tell private companies what to make for the good of the country. Think, for example, of how Ford Motor Company made nearly 300,000 vehicles — including tanks — for World War II.

As the Cold War heated up in the late 1940s and the Korean War began in June 1950, President Harry Truman’s administration thought it should codify those powers into law. With Congress’s help, the DPA was signed into law in September 1950. It’s been amended and altered over the years, but the general thrust remains the same.

Specifically, the DPA allows the federal government to skip the line, so to speak, when it makes requests of private industries. But Trump can’t just go to a company and say “produce this.” He delegates those requests to federal agencies, and the one that does the vast majority of the ordering is the Defense Department.

The president would authorize DoD to place an order with a company — say, for a lot of respirators — and then the Pentagon would go to that company and ask it to produce those respirators. That company would then have to fulfill that order first before it could fill any other commercial orders, since the federal government gets priority.

The DPA was “really made for a moment like this”

Sasha Baker, a top aide to former Defense Secretary Ash Carter, told me that some people may get scared or anxious hearing the act has been invoked because it makes it seem like the nation is gearing up for war. But it actually happens pretty regularly, though on a much smaller scale.

In fact, Trump invoked the DPA last summer, though it received little attention. He ordered the Pentagon to increase the production of rare-earth magnets used in electronics out of concern that China would restrict exports of those materials. Having enough magnets in American hands was “essential to the national defense,” Trump proclaimed at the time.

Baker said Trump’s Wednesday decision was a good one, though she thinks he should’ve made it weeks earlier. The DPA was “really made for a moment like this,” she told me.