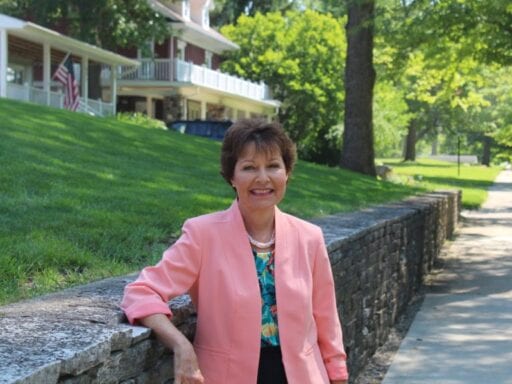 Meet Democrat Janet Garrett, the retired teacher and former union leader who is trying for the third time to unseat Rep. Jim Jordan, the conservative lawmaker who continues to fight allegations that he turned a blind eye to rampant sexual abuse at Ohio State in the 1990s.

Garrett lost to Jordan in Ohio’s Fourth Congressional District by 35 points in 2014. She lost by 36 points in 2016, when the district went for Donald Trump by a wide margin. Garrett is running an uphill battle; projection models expect her to lose and the district is rated “safely Republican.”

But she says everything has changed in 2018; Trump’s win was a call for new faces in Washington, and Democrats have found success this year in places where Trump won by wide margins less than two years ago. Garrett has raised more than $1 million in campaign contributions, according to her campaign manager Zachary Stepp, and already has had several offers to hold fundraisers in California, which she says she’s considering doing. She came short of $100,000 in fundraising in 2016 and didn’t even come close in 2014.

Though Garrett has already called the allegations “serious” and demanded a thorough investigation, she is otherwise steering her campaign clear of the drama. She’s following the same playbook Sen. Doug Jones (D-AL) played in Alabama when faced with Republican Roy Moore’s alleged sexual misconduct with minors: Let the scandal play out and stick to the message.

As Jordan, the ultra-conservative Freedom Caucus founder, remains in headlines, Garrett has been growing a national presence.

Garrett’s message is to end “gridlock” in Washington. She says she is prioritizing the opioid crisis and fixing Ohio’s crumbling infrastructure — which Garrett sees as a job creator in the district. Her website supports universal health care and a public option, but she told Vox she isn’t “married to any one message” on health care.

Instead of specific policy, her campaign message is focused on “bringing change” to Washington. She wants to kick out Democratic leadership — including House Minority Leader Nancy Pelosi.

“I look at the leadership, I think we should vote them all out,” Garrett said.

A Democrat running in a deeply conservative district covering the Northwest suburbs of Columbus, Ohio, Garrett says she wants to reach across the aisle, which is in clear contrast to Jordan’s political brand, whose role in the Freedom Caucus is often seen by both Republicans and Democrats as an obstructionist force in the House. The Freedom Caucus is known for tanking major pieces of legislation in their bid to make policy more conservative. They nearly killed Republican’s Obamacare repeal-and-replace bill and blocked the most recent Republican “compromise” immigration bill.

But any Democrat on the ballot will have a huge disadvantage. Heavily gerrymandered, the district is overwhelmingly white and went for Trump by 33.4 points in a state where Trump won overall by 8. A Democratic Congressional Campaign Committee aide told Vox that the official campaign arm for House Democrats is monitoring the district closely and always looking for opportunities for races that are competitive when a Republican is scandal-plagued.

Jordan has held the seat by a comfortable margin since he was elected in 2006. It’s given him the room to become one of the most conservative members of the House and the founder of the Freedom Caucus, which regularly bucks Republican Leadership. Jordan has floated a possible bid for Republican House speaker.

But that bid has a murky future; Jordan has been under heightened scrutiny for allegedly brushing off wrestlers’ complaints about a team doctor groping athletes at Ohio State in the 1990s during his time as an assistant wrestling coach. He vehemently denies the accusations, and his conservative colleagues in the House have rallied around him.

Jordan’s gone on the attack. He has called the half a dozen former wrestlers and colleagues who said he knew about the abuse liars and said at least one of them has a “vendetta” against him and the university.

If the tide does turn against Jordan with voters, Garrett is pitching herself as the alternative.

The Democratic National Convention has set its speaker lineup
A second whistleblower on Trump and Ukraine is coming forward
Actor Kirk Douglas has died at the age of 103
Why Trump’s inauguration money is a major part of Mueller’s Russia investigation
The Orionid meteor shower peaks this weekend. Here’s how to watch.
The trial begins for the ex-officer who shot her unarmed neighbor Botham Jean