The Democratic convention highlighted gun violence. Here’s what Biden plans to do about it. 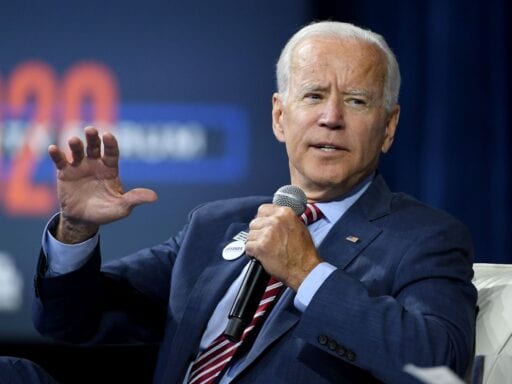 Biden has a plan to take on the NRA again. But it’s unclear if Democrats will prioritize the issue.

In one of the standout moments at the Democratic National Convention on Wednesday, former Arizona Rep. Gabby Giffords retold her story — explaining how she went from being the victim of an assassination attempt to a gun violence crusader. “We are a nation ready to end gun violence,” Giffords said, endorsing former Vice President Joe Biden’s presidential run. She ended her speech with a call for those watching to “vote, vote, vote.”

Biden does have a record, and a plan, in favor of gun control. In the 1990s, he was a top Democrat in getting both federal background checks and a 10-year assault weapon ban enacted. Biden has often boasted that he has “taken on the National Rifle Association (NRA) on the national stage and won — twice.”

As part of his presidential campaign, Biden introduced a sweeping gun control plan that includes universal background checks, an assault weapons ban, more resources toward the enforcement of existing gun laws, a public push for the development of “smart guns,” and incentives for states to adopt “red flag” laws, which let courts confiscate guns from people deemed a risk to themselves or others and develop gun-licensing systems.

With mass shootings and more typical everyday gun violence regularly making headlines, there’s a lot of support for Democrats to act on gun control — with more recent support coming from movements like March for Our Lives, which formed after the 2018 Parkland, Florida, school shooting in which a gunman killed 17 people and injured 17 others.

But there are still questions about how likely gun control is to pass. For one, it would almost certainly require Democrats to retake the Senate — an electoral feat on top of winning the White House. And if Democrats do take the Senate, it’s unclear if they’d prioritize action on gun violence over Covid-19, the economy, climate change, health care, and criminal justice.

What Biden’s gun control plan does

Biden’s plan would make sweeping changes to federal gun laws, with universal background checks, an assault weapons ban, and red flag laws checking off much of what activists have demanded over the past few years.

Biden’s plan would also close several loopholes in existing law, repeal a law that made it harder to sue gun manufacturers and sellers when they make or sell guns they should have known would be diverted to criminal uses, limit the number of guns an individual can purchase to one per month, require safe storage, finance strategies to combat urban violence, and fund more research into preventing gun violence. (For more specifics, read Biden’s full plan.)

Still, the plan doesn’t go as far as some of Biden’s Democratic rivals did during the primary. Sens. Cory Booker and Elizabeth Warren, for example, proposed a federal licensing system — one that would require everyone in the US to obtain a license to buy and own firearms. But Biden’s plan only includes financial incentives for states to adopt licensing, which they could decline to do.

In the past, Biden has criticized the concept of licensing, saying it “will not change whether or not people buy what weapons — what kinds of weapons they can buy, where they can use them, how they can store them.” The research, however, has found licensing is among the more effective proposals for reducing gun deaths, more so than universal background checks or an assault weapons ban.

Tougher gun laws are backed by the research. A 2016 review of 130 studies in 10 countries, published in Epidemiologic Reviews, found that new legal restrictions on owning and purchasing guns tended to be followed by a drop in gun violence — a strong indicator that restricting access to guns can save lives.

Many forms of gun control poll very well, with universal background checks in particular regularly getting 80-plus percent support from Americans over the past few years.

The reality, though, is Congress hasn’t passed a major gun control law since the measures in 1993 and 1994.

The concern is what’s known as the intensity gap: Opponents of stricter gun laws are willing to vote based on that one issue, while supporters of gun control usually aren’t. So if Congress were to pass sweeping gun control legislation, there’s a chance that supporters of the law would be disproportionately punished by voters, while those who vote against the law may get more support.

This has been a problem for decades. As Republican strategist Grover Norquist said in 2000, “The question is intensity versus preference. You can always get a certain percentage to say they are in favor of some gun controls. But are they going to vote on their ‘control’ position?” Probably not, he suggested, “but for that 4-5 percent who care about guns, they will vote on this.”

It’s possible this has changed. With years of frequent mass shootings and the rise of the March for Our Lives movement, it’s not out of the question that the political momentum has tipped toward supporters of gun control.

But has it been enough? If Democrats take over the Senate and White House, they’ve promised an extremely ambitious agenda — with action on Covid-19, health care reform that builds on the Affordable Care Act, a Green New Deal, a wide-ranging economic plan with “Build Back Better,” and criminal justice reform.

With so much on their plate, Democrats will have to set priorities. The question is if they will, or even should, prioritize gun violence over all those other issues, given that whatever they do first is likely to inspire some sort of backlash among more conservative voters (for example, the Affordable Care Act helped trigger the Tea Party).

It remains to be seen. But it means that the most important question on gun violence may not be what policies Biden and Democrats support, but whether they will actually pursue such policies once they’re in power.