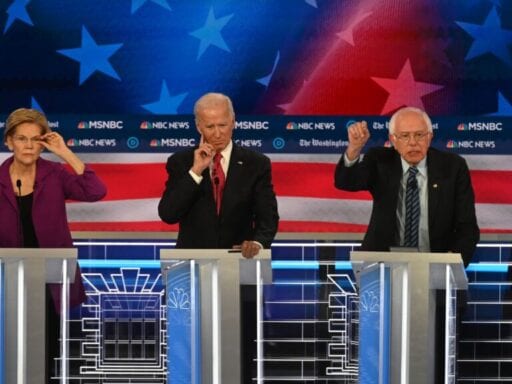 Democrats stepped in on the side of labor ahead of the debate — and helped workers win.

December’s Democratic debate appears to be on after a labor dispute at Loyola Marymount University in Los Angeles, where the event is set to be held, has landed on a tentative solution. Democratic candidates had threatened to skip the debate and refuse to cross a picket line at the venue.

Unite Here Local 11, a union representing about 150 cooks, dishwashers, and cashiers, said in a statement Tuesday morning that it secured a tentative contract agreement with on-campus food service provider Sodexo on Monday. According to Politico, the union said talks began in March but stalled in November. Unite Here credited Democratic National Committee and Chair Tom Perez for helping to broker the deal, which includes a 25 percent increase in compensation, a 50 percent drop in health care costs, and an increase in job security.

“I am thrilled that we were able to reach an agreement, and that the candidate debate can continue as scheduled,” said Angela Fisher, a prep cook at Loyola Marymount University, in a statement released by the union. “I want to thank the Democratic candidates who stood with us and the Democratic party that helped us win.”

Students and workers began picketing on campus in November with regard to their concerns about getting what they deem a fair agreement, and Sodexo canceled negotiations. So the union threatened to picket the debate.

“We had hoped that workers would have a contract with wages and affordable health insurance before the debate next week. Instead, workers will be picketing when the candidates come to campus,” the union said in a statement on Friday.

Sodexo said the union wasn’t being fair in its characterization of what’s happening. A spokesperson for the company told Zeeshan Aleem in a Vox report that it is “100 percent committed to reaching an agreement.”

But that didn’t stop candidates from weighing in — and the candidates and the DNC from stepping in on behalf of the workers. It was an important show of force by Democratic candidates, led by progressive Sens. Elizabeth Warren (D-MA) and Bernie Sanders (I-VT), on the side of workers.

Warren was first to tweet her support for the workers and declare she wouldn’t attend the debate if that meant crossing a picket line, and Sanders soon followed.

.@UniteHere11 is fighting for better wages and benefits—and I stand with them. The DNC should find a solution that lives up to our party’s commitment to fight for working people. I will not cross the union’s picket line even if it means missing the debate.

I stand with the workers of @UniteHere11 on campus at Loyola Marymount University fighting Sodexo for a better contract. I will not be crossing their picket line.

Sen. Cory Booker (D-NJ) and former Housing and Urban Development Secretary Julián Castro, neither of whom made the debate stage, also declared their support for the workers.

The debate was originally supposed to be held at the University of California Los Angeles but was moved — also because of a labor dispute.

Having progressive candidates in the race matters for workers

This is not the first time in the 2020 primary that Democratic candidates have weighed in on the side of workers and drawn attention to labor issues across the US. Multiple candidates have joined picket lines and declared their support for labor this election cycle. However, it’s Warren and Sanders who have really led the charge, which isn’t surprising, given their longstanding commitment to labor and workers and their actions throughout their political careers.

In August, Sanders unveiled a sweeping plan to double union membership. A longtime worker ally, he has come out in support of video game unions and graduate workers, among a wide range of professions. His campaign sent out emails to supporters urging support for striking McDonald’s workers last winter, and he claims to have walked more picket lines in his life than any of his opponents — an assertion that’s not hard to believe.

I have walked more picket lines in my life than all of my opponents combined. That’s what I do.

Warren has also released a plan to boost workers and unions and joined striking workers on multiple occasions. Both the Sanders and Warren campaign staffs have unionized.

As Tara Golshan wrote for Vox earlier this year, in the wake of the 2016 election, there was a lot of fretting about the union vote among Democrats:

Exit polling from the 2016 presidential election showed Trump trailing Hillary Clinton by only 8 points among union households — a significant improvement from Mitt Romney, who trailed Barack Obama by 18 points with those same voters. Those numbers, in part, reflect a shift among white men, according to data from the Cooperative Congressional Election Study.

But organized labor still represents one of the most influential groups of mobilized voters, historically, for Democrats.

Union members “vote at higher rates than most Americans, they are mobilized, they are in important states,” Paul Frymer, a political scientist with Princeton University who has written on the labor movement, told Vox in May. “The union movement is a big part of the Democratic Party — there isn’t another mobilized coalition like it. They are the biggest civil rights movement in the country.”

There is a battle among 2020 Democrats for union support and a push to restore the party’s reputation as the party of labor. This also isn’t the first time attention to labor has affected the 2020 Democratic primary: Houston’s bid to host the Democratic National Convention was reportedly harmed by a contract dispute between the city’s firefighters’ union and the mayor. The dustup over the December debate is the latest example of the Democrats trying to lean in on the side of unions.

Aimee Stephens brought a trans rights case to the Supreme Court. She may not live to see the decisio...
Nancy Pelosi’s outfit at the House impeachment debate sent a subtle message
A House Democrat who opposes impeachment is expected to switch political parties
Several of the Museum of the Bible’s prized holdings are forgeries
Swing voters are extremely real
Why Jeff Sessions thinks Christians are under siege in America