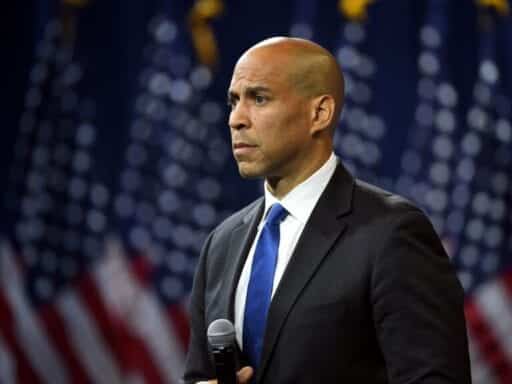 The forum exposed real differences between the 2020 candidates.

The Democratic Party has moved to the left on issues such as health care, college, and taxes on the wealthy. Now some Democratic candidates are trying to get the party to do the same on guns.

But divisions on just how far the party should go were on display when nine leading Democratic presidential candidates talked about containing gun violence at an MSNBC forum on Wednesday.

The candidates still agreed on a lot. They talked up universal background checks, repeating the words “common sense” again and again. An assault weapons ban got wide support, with candidates decrying “weapons of war in the streets.” So did more research into gun violence, closing loopholes in existing firearm laws, and better enforcement of those laws.

When Sen. Cory Booker (D-NJ) was asked about gun licensing, though, he launched into an impassioned case for Democrats going further on this issue than they have in the past. And he criticized candidates who didn’t support a federal licensing system — a shot, seemingly, at former Vice President Joe Biden.

“You should not be a nominee from our party that can seriously stand in front of urban places and say, ‘I will protect you,’ if you don’t believe in gun licensing,” Booker said, pointing to polls showing that more than 70 percent of Americans support licensing.

Booker also took aim at former Rep. Beto O’Rourke (D-TX), who initially said Booker’s plan to enact a federal licensing system “may be too far” and didn’t explicitly support licensing — until a mass shooting in El Paso, Texas, led him to get much more aggressive on guns.

“Beto O’Rourke was not for gun licensing, criticized me when I came out for it,” Booker said. “He saw the horrors visiting his community. Are we going to have to wait until Hell’s lottery comes to your community?”

O’Rourke later commended Booker for his leadership and rebuffed the criticism, saying, “this is not a moment to seek division.”

There’s wide agreement on policies like universal background checks and an assault weapons ban, but there’s much less agreement on proposals like a federal licensing system and a mandatory buyback program for assault weapons — in part because some candidates don’t believe that these programs could be enacted or could work.

Every candidate on the stage Wednesday agreed on two policies: universal background checks and an assault weapons ban.

This reflects a status quo going back more than two decades. In the 1990s, a Democratic-controlled Congress passed federal background checks and a 10-year assault weapons ban. Since then, Democratic efforts on guns have focused on building on the background check system — to make it apply to more gun sales, such as private transfers — and renewing the assault weapons ban.

There is significant disagreement on whether these policies are sufficient. In response to questions about whether their plans go far enough, former Vice President Joe Biden and Sen. Amy Klobuchar (D-MN) pointed to the politics: If Congress has not been able to pass even universal background checks, is it really realistic to promise more — and should other measures that can already pass be held up until more can be done?

“I don’t want to hold things up and get caught up in false fights,” Biden said. “I want to get things done in the meantime.”

Booker, pointing to the polling on bolder policies like gun licensing, said that Americans are already there. As he and other candidates pointed out, the hurdle isn’t public support but getting Congress to stop fearing the sway of the National Rifle Association and single-issue gun rights voters.

“Do not let the fearmongers dictate our policy,” Booker said.

Underpinning this debate is some of the more current evidence on gun policies. Some of the recent research on universal background checks has been mixed, and studies on the last assault weapons ban found it ineffective for reducing overall levels of gun violence, in part because the great majority of gun deaths involve handguns, not assault weapons. That suggests that to truly get levels of gun violence down, the next Congress and president will have to go further.

Booker cited studies showing that licensing systems reduce gun violence. In Connecticut, Missouri, and urban counties, a licensing system was associated with fewer gun deaths — both homicides and suicides. The licensing system in Massachusetts is cited by experts as one of the primary reasons the state has the lowest gun death rate in the US.

The candidates generally seem favorable to licensing. Where there’s division — and where Booker seemingly called Biden out — is whether the system should be federal or state by state. Booker, Sen. Elizabeth Warren (D-MA), and entrepreneur Andrew Yang, among others, include in their plans a federal system that would require a license to buy and own a gun. But Biden’s plan doesn’t; it would financially incentivize states to adopt their own licensing systems, meaning states could choose not to do so.

In defending his proposal, Biden flipped the rhetoric often used by Booker to argue for licensing, pointing out that driver’s licenses are implemented at the state level. “They’re state licenses,” Biden said. “You don’t need a federal license to drive a car.”

Booker argued that this would fail to solve the full problem. He pointed out that in states with stronger gun laws, most of the firearms used in crimes come from states with much weaker laws. In 2017, half of guns traced by police in Boston had out-of-state origins and less than a quarter came from within the state (the rest had unconfirmed origins). The same trend — or worse — has been found elsewhere, from Chicago to New York to Mexico.

“If you do not have a federal licensing program, this is what you’re creating,” Booker said. “We’ve created a system where you’re only as safe as the state near you with the least restrictive gun laws.”

Biden, however, seems skeptical of licensing. When Booker first released his plan, Biden said that “gun licensing will not change whether or not people buy what weapons — what kinds of weapons they can buy, where they can use them, how they can store them.” That’s contradicted by the research on licensing, but it helps explain why Biden isn’t willing to go much further.

Democrats sharply disagree on a mandatory buyback for assault weapons

The idea: An assault weapons ban leaves millions of these weapons out there, so the US government needs to do something on top of the ban to get the weapons out of circulation.

As the first to speak at the event, Buttigieg warned Democrats about chasing the “shiny object” — of a mandatory buyback program — when they have a chance to do something about guns right now. It was a political case for avoiding a very controversial topic in gun policy: outright confiscation.

Other candidates have proposed a middle option. Biden’s plan, for instance, would institute a voluntary buyback program, but if gun owners don’t give up their assault weapons, they’ll have to go through a background check and register the weapons — just like they’re already forced to do so with machine guns today.

Later on, O’Rourke criticized “those who are worried about the polls and want to triangulate or talk to the consultants or listen to the focus groups” — calling out Buttigieg in particular. He pointed to a poll that found a majority of voters back a mandatory buyback program for assault weapons. “The polls, if you need them, support this,” O’Rourke argued.

Buttigieg had previously argued that the evidence for buyback programs in the US has been mixed, often producing guns that were already defective. But American buyback programs have also been voluntary.

Mandatory buybacks — which are effectively confiscation schemes — have been tried with more success in other countries. A mandatory buyback program in Australia, paired with a ban on automatic and semiautomatic rifles and shotguns, was linked to drops in homicides and suicides.

But even if a mandatory buyback for assault weapons were implemented in the US, it’s not clear that it would do much to reduce gun violence. Shootings with rifles, including assault rifles, make up less than 3 percent of gun homicides in the US. More than 70 percent of gun homicides are instead carried out with handguns — which would be largely neglected by a plan to ban and confiscate only assault weapons.

Still, there is some evidence that restricting access to assault weapons might reduce the lethality of mass shootings.

For now, though, Democrats are deeply divided on the issue.

The most bizarre thing about Trump’s farewell speech is how normal it sounds
The economy shrunk at the fastest pace since the Great Recession
Pope Francis officially updated Catholic teaching, calling the death penalty “inadmissible”
How the US became the center of global kleptocracy
Taylor Swift just broke her noted silence on politics to endorse two Tennessee Democrats
5 things to know about the brand new US climate commitment