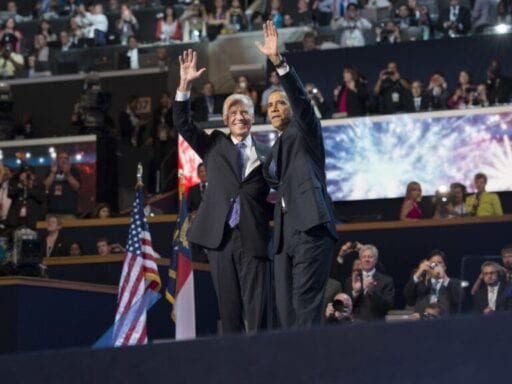 Share
Loading...
President Barak Obama and Vice President Joe Biden wave to the crowd on stage at the end of three days of the Democratic National Convention at the Time Warner Cable Arena on September 6, 2012, in Charlotte, North Carolina. | Ken Cedeno/Corbis via Getty Images

Joe Biden, Barack and Michelle Obama, and Bernie Sanders are among the speakers for next week’s virtual convention.

The Democratic National Convention is going fully virtual this year.

Rather than days of full programming, the convention will be condensed into two hours of televised speeches spread out from Monday, August 17, to Thursday, August 20. Former Vice President Joe Biden is set to accept his party’s nomination on Thursday night from his home in Delaware, rather than the original planned location of Milwaukee, Wisconsin.

Fears about the Covid-19 outbreak and the potential to spread the virus even with a severely reduced crowd caused the Democratic National Committee to scrap its in-person Milwaukee convention.

Here’s the full lineup of speakers at this year’s Democratic National Convention.

The DNC speaker schedule and lineup

There will be a slate of speakers each night, including former presidents and sitting US senators, governors, and US representatives. Here’s the list, broken out by day.

Why the DNC is virtual this year

In previous years, the national party convention would be a moment for unity and celebration. But amid a once-in-a-century pandemic that’s claimed more than 163,000 American lives and counting, Democrats are hoping their virtual convention sends a larger message about how their nominee plans to govern in a time of national crisis.

With an absence of federal leadership from President Donald Trump, the Biden campaign and national Democrats are portraying themselves as the party of responsibility.

“I’ve wanted to set an example as to how we should respond individually to this crisis,” Biden said at a recent virtual fundraiser, speaking about the virtual convention. “From the start of the process, we’ve made it clear. … Science matters.”

Democrats have known for months that the coronavirus meant the normal throng of thousands of cheering delegates was out of the question. A recent public health order from Milwaukee Mayor Tom Barrett would have limited the convention’s in-person capacity to 250 people, but coronavirus cases in Wisconsin are also still on the rise, and interstate travel comes with risk.

“From the very beginning of this pandemic, we put the health and safety of the American people first,” DNC Chair Tom Perez said in a statement. “We followed the science, listened to doctors and public health experts, and we continued making adjustments to our plans in order to protect lives. That’s the kind of steady and responsible leadership America deserves. And that’s the leadership Joe Biden will bring to the White House.”

Democrats want one message to dominate their convention: Where Trump has failed, Biden will lead America out of its current crisis.

“People care about one thing: They care about being safe,” former Virginia Gov. Terry McAuliffe told Vox. “It’s a totally different dynamic; we have one message to come out of that convention.”