The difference between Nixon and Trump is Fox News 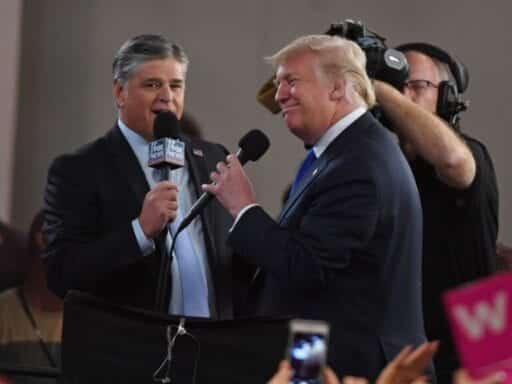 Fox News shields President Trump. But his love for their conspiracies might bring him down.

On Tuesday night, Fox News correspondent Geraldo Rivera spoke to Fox News host Sean Hannity, on Fox News, about the role Fox News would play in protecting President Donald Trump from impeachment. “You know, if it wasn’t [for] your show, Sean, they would destroy him absolutely,” Rivera told Hannity, who, when not hosting his television and radio shows, informally advises Trump. “You are the difference between Donald J. Trump and Richard Nixon.”

Let’s start with what Rivera got right. Hannity may not save Trump from impeachment, but conservative media outlets have protected Trump’s presidency throughout his first term. They have done so not by winning new allies — his approval numbers remain low with everyone but Republicans — but by ensuring that Republicans in Congress, his real firewall against being removed from office, remain on his side.

Nixon needed a Fox News, and he knew it. When he won the presidency in 1968, he was not in a strong position. He’d led the popular vote by less than 1 percent, Democrats held both houses of Congress, and Nixon was convinced that the press corps was against him. He believed two things were necessary to fully exercise the powers of his new office: a strong, loyal Republican Party and a pro-Nixon media.

Getting the party on his side wasn’t hard. Nixon had earned a reputation as a party man throughout the 1960s. After losing his bid for president in 1960 and California governor in 1962, he went back out on the campaign trail in 1964 and 1966, stumping for every Republican who would have him. He did the same as president — with one exception. In 1970, despite angling to support Republican candidates across the country, he turned on New York’s Republican Sen. Charles Goodell (father of NFL owner Roger Goodell). He instead threw his support instead behind James Buckley, who ran as a member of the Conservative Party and who ultimately unseated Goodell.

Goodell’s sin? Speaking out against the Vietnam War. Nixon wanted Republicans in office, but they had to be loyal.

The other thing Nixon wanted was his own media outlet. Believing most mainstream outlets were in the tank for the Democrats, he was keenly interested in developing an alternative Republican news source. His administration had explored the idea of GOP-TV with future Fox News founder Roger Ailes, who at the time was a political media consultant. GOP-TV would create pro-administration segments and mail them out to local outlets across the country (a model that was more like Sinclair Broadcasting’s than Fox News’s). At the same time, conservative activists were also developing a scheme for a corporate takeover of CBS, hoping to transform it into a right-wing network.

Neither of those projects worked, and as the Watergate crisis mounted, Nixon was in a precarious position. Yes, he had won reelection in a historic landslide. But his propaganda machine never had much power.

Conservative media, such as it was, aggressively supported Nixon throughout the crisis, but it was simply not powerful enough to reshape the emerging consensus around administration wrongdoing or to keep Republican officeholders in line. Outlets like National Review stood by Nixon’s side, spinning every possible defense against impeachment, but they made very little impact. The dam broke; Republicans jumped ship; Nixon’s presidency ran aground.

At the beginning of his impeachment inquiry, Trump is in a very different place. He has a powerful propaganda system and a devoted Republican Party, from the base to the leaders in Congress.

The major driver of that devotion is not Trump but Fox, which has spent two decades mediating the desires of the base and disciplining the actions of the party. Rivera is hardly the first Fox News personality to note the network’s power over the GOP. Back in 2012, when Trump himself was a regular on Fox & Friends, political consultant Dick Morris appeared on the morning show to praise the network for its ability to shape the Republican primary field. After a string of candidates had appeared on the program, Morris sat on the show’s trademark red couch and observed, “You don’t win Iowa in Iowa. You win it on this couch. You win it on Fox News.”

Five years later, despite primary-season conflicts between Trump and some of the network’s heavy hitters, Fox was reworking its lineup to better match the nativist nationalism of the new Trump administration. With primetime stars Bill O’Reilly and Megyn Kelly out, the network elevated Tucker Carlson and Laura Ingraham, both friendly to the anti-immigrant nationalist right, to primetime.

But the network wasn’t just changing its evening programming: It was becoming a lifeline for the Trump presidency, an incubator for defenses of his policies, his crassness, and his corruption. Throughout his presidency, those defenses have quickly bounced between Fox, the White House, and Congress, creating a unified playbook that all Republicans are operating from. From the travel ban to the Kavanaugh confirmation fight to the Mueller report, Fox News and Republican leaders quickly honed in on the same talking points, then stood shoulder to shoulder against any outside criticism.

So will it be enough to save him from impeachment and removal?

There have not yet been any defections within the GOP, and Fox News continues to slavishly support the president, as do the vast majority of Republicans. But the impeachment drive has altered the way that Fox and Trump function in the broader media and political environment. The defenses of Trump popping up on shows like Hannity and Fox & Friends are thin conspiracy theories (like one that suggested the intelligence community inspector general had changed the whistleblower form to allow secondhand information) that dissolve upon inspection.

That’s fine for Fox’s audience — they’re there for affirmation and talking points — but so far it hasn’t had much of an impact on the broader story of Trump coercing Ukraine to interfere in the 2020 election. It’s even causing odd flare-ups on Fox News itself, as the more news-oriented anchors quietly debunk the conspiracies that the more propagandistic opiners hype. This led to a spat between Shepard Smith and Tucker Carlson that ended with the network ordering Smith, who was pushing back against Carlson’s spin, to drop it.

But an underplayed dimension of this is that Fox has actually played a role in endangering the future of the Trump White House. The feedback loop between Fox News and the White House has often been covered as an asset: Trump is the first American president to have something approaching state television, a channel that will lavish praise on him while amplifying any spin the administration offers.

But over the past decade, Fox News has become increasingly committed to fringe ideas and conspiracy theories, especially in its opinion programming. This was, after all, the network that boasted Glenn Beck’s elaborate chalkboards, Sean Hannity’s fever-brained conspiracies about Seth Rich, a murdered DNC staffer, and yes, Donald Trump’s birther scam.

When Trump won the presidency, the consequences of Fox News’s conspiracy turn escalated. Trump would rail against the deep state, Hannity would spend fifteen minutes covering it on his show, Trump would watch Hannity and grow even more convinced there was a deep-state conspiracy. Both the network and the White House were becoming untethered.

That cost of that dynamic has become clear in the current impeachment inquiry. The Biden-Ukraine conspiracy did not spring fully formed from Trump’s head. It was formulated in a political hit book by Peter Schweizer, circulated through conservative media, and then trickled into the White House, where Trump and his allies appear to have acted on it in ways that have led to the impeachment inquiry.

Within the bubble of the Fox News White House, the hunt for Biden family corruption was a fully coherent agenda, one that had the secretary of state, attorney general, and president’s lawyer traipsing around the globe to hunt down clues. But outside that bubble, it’s a very different story. Instead of a tale of the US president bravely facing down corruption, it looks like — because it is — a story of a US president enlisting foreign countries to kneecap his domestic political rivals.

That’s a reflection of the unusual relationship that Fox has with Trump: They might be his propaganda network, but he’s their most enthusiastic, credulous, and powerful viewer. They’re both, together, trapped in a world of their own making, and surprised when the rest of the country doesn’t see what they’ve convinced themselves of.

In that sense, late-stage Fox News has been very bad for Trump’s presidency. True, it may still help keep Republicans in line, preventing Trump’s removal from office. But by helping gin up the Ukraine conspiracy, it has badly, if not mortally, wounded his presidency. In the end, Trump may still face the same fate as Nixon, not despite Fox News, but because of it.

Nicole Hemmer, a Vox columnist, is the author of Messengers of the Right: Conservative Media and the Transformation of American Politics. She is an associate research scholar at Columbia University and co-host of the Past Present podcast.