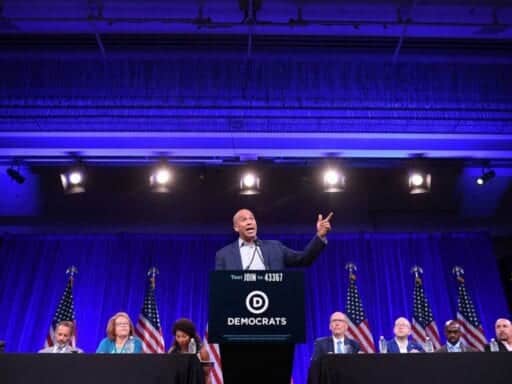 Activists have called for a climate change debate for months. The DNC says one won’t happen, and raised new questions about changes to caucusing.

At its summer meeting in San Francisco this weekend, the Democratic National Committee (DNC) addressed two things at the top of many voters’ minds: climate change and Russian interference in the 2020 election. The decisions party leaders made on both points frustrated activists and fellow Democrats.

And in a move that, according to Bloomberg, incensed state party officials, the DNC announced it had commissioned a cybersecurity firm to hack its assets as a means of testing a virtual caucus system set to be used in contests in Iowa and other states next year. The hack was successful, casting doubt on the reliability of those systems, but state leaders claimed the test was unfair and a poor indicator of caucus security. Nevertheless, it raised new concerns about cybersecurity within a party still smarting from a 2016 email leak that sparked bitter acrimony during that campaign’s nominating process.

Members of the DNC voted 222-137 against allowing Democratic presidential candidates to participate in a third-party debate focused solely on climate change without facing sanctions from party brass. Currently, the DNC closely regulates how and when candidates can debate, and the vote gave it a mandate to continue doing so.

Had the vote gone the other way, candidates would have been allowed “to participate in multi-candidate issue-specific forums with the candidates appearing on the same stage, engaging one another in discussion.” This would have set the debate stage for the #ClimateDebate that environmental groups, notably the youth-led Sunrise Movement, had been advocating for — and that 15 candidates said they would be willing to participate in.

Top DNC officials, including Chair Tom Perez, were opposed to the resolution. Perez has repeatedly argued that no one issue should take precedent over another, and has said a climate debate would unfairly advantage Washington state Gov. Jay Inslee. Inslee left the presidential field last week, but had run as a single-issue candidate completely focused on climate change.

Supporters of a climate debate argued that the issue is serious enough to merit special treatment.

“If an asteroid was coming to earth, there would be no question about having a debate about it,” a DNC member said, according to the local Mercury News, which covered the meeting. “But with this existential crisis facing the world, we all sit and wring our hands.”

Protesters, many from the Sunrise Movement, interrupted the committee meeting where the proposal was being considered, chanting “We can’t wait!”

Although many Democratic candidates have said they support holding a climate debate, including Joe Biden and Bernie Sanders, most have so far been silent about the committee’s vote. On Saturday afternoon, Beto O’Rourke called the decision to vote down the debate “baffling” and “alarming,” however:

This decision is as baffling as it is alarming. Our planet is burning— the least we can do as a party is debate what to do about it. https://t.co/A7uvwTJSku

And Inslee, who is now running for re-election as governor, tweeted his support for the pro-debate activists:

Thank you to all the activists who have fought for a #ClimateDebate. You’re on the right side of history.

Together, we’ll make sure the Democratic nominee is ready to confront Trump on his disastrous climate failures and defeat this crisis.

Nothing is more important.

Activists from groups like Sunrise Movement and Greenpeace have been agitating for a climate debate for months, and ramped up their activism after the issue of climate change received relatively little attention during the first round of Democratic debates — just fifteen minutes of airtime in four hours. They argued that voters deserve to know how candidates will address what they see as an existential threat to humanity.

And voters seem to be in their corner. Climate change has become a top concern for many Democratic voters. And as Vox’s Umair Irfan has reported, a climate debate would have presented an opportunity for voters to fully engage with the facts around the issue:

Climate change rarely receives a substantive prime-time policy discussion, so voters don’t often hear about it on television. A debate asking presidential hopefuls to walk through how they plan to cope with a warming world would be a public service and help educate voters who may not realize just how much a warming world will impact agriculture, the economy, health, and national security.

But as Irfan noted in another report on the issue, the vote, and ultimate defeat, of the proposal to hold a climate debate reveals a broader conflict among Democratic politicians over how central to make climate within their policy-making process:

The argument over whether or not to hold a climate change debate is a central question in a larger discussion among Democrats over how to combat climate change. Should it be the centerpiece of policy-making, or should climate considerations be an element of other issues of concern?

We’re seeing this play out in how Inslee’s climate strategy compares to that of Warren. In the proposals she’s released so far, Warren has addressed climate change through her plans for public lands, domestic manufacturing, and the military.

So do Democrats really need a climate debate, or can climate change be adequately addressed in other policy discussions?

That divide ultimately led to the DNC voting not to have a climate change debate, regardless of the grassroots and presidential campaign activity around the issue.

The DNC also spent time at its meeting addressing cyber threats, but seemed to have arrived a few conclusions. The organization’s e-mails were compromised during the 2016 election by Russian actors, and it hopes to avoid any interference in its upcoming primaries and caucuses.

To that end, the DNC revealed it is concerned over upcoming virtual caucuses after a cybersecurity firm it hired to locate vulnerabilities within its system was able to hack into its teleconferencing system as well as the networks of the Iowa Democratic Party and Nevada Democratic Party, according to Bloomberg News.

Both Iowa and Nevada hold caucuses rather than primary elections; the DNC told all states that hold caucuses they were expected to use a “virtual caucusing” system to make caucusing — the process of sitting in a room and choosing one’s preference for party candidate — easier for those who cannot show up to physical caucus sites, as Vox’s Eric Kleefeld has written:

In previous election cycles, caucus participation was limited to people who physically showed up at the local caucus sites. This campaign cycle, however, the party will allow for participation online or by phone in what is known as a “virtual caucus.” Those who participate in the virtual caucus will decide 10 percent of awarded delegates, with 90 percent of the delegates being decided by in-person attendees.

In theory, virtual caucusing should help the party reach a different type of voter. According to Kleefeld, a June Des Moines Register/CNN poll found that in Iowa, “prospective virtual caucus voters currently have lower education levels than the prospective in-person voters” and “potential virtual caucus-goers are also younger than in-person attendees.”

But many state party officials reportedly expressed outrage over the hack, and as Bloomberg’s Tyler Pager reports, they also expressed frustration with how the DNC has implemented this change to how caucusing has always been done:

Caucus-state officials offered a litany of complaints: That the DNC created the rules about absentee participation without considering how the states should achieve that goal; that the DNC offered little help in devising a virtual system, what state officials called the most significant change in caucus procedure since modern caucuses began in 1972; and were slow to raise concerns about security.

State party officials also argued that the networks that were hacked were not good stand ins for the virtual caucus systems they are building; they claim, for instance, that their telephonic caucuses cannot be compared to the teleconference system the security firm breached.

The DNC has reason to be concerned about cybersecurity. As a population of state delegates have been reserved for the winner — or winners — of the virtual caucuses, any interference could skew who becomes the Democratic nominee for president.

And security officials like former Director of National Intelligence Dan Coats have warned hostile foreign actors will try to meddle in the 2020 election. In fact, Coats told the Senate Intelligence Committee earlier this year that those actors will likely work to influence the contest in ways we’ve not yet seen: “We expect them to refine their capabilities and add new tactics as they learn from each other’s experiences and efforts,” he said.

The DNC doesn’t have long to shore up its cybersecurity concerns; the first caucuses begin in six months. In the meantime, it has good reason to find and patch up — or to scrap entirely — any potentially vulnerable component of their nominating process.

The 2020 Oscars red carpet, explained by 5 looks
Taylor Swift just broke her noted silence on politics to endorse two Tennessee Democrats
Decking the halls for pandemic Christmas
Donald Trump just issued a surprise pardon for the man at the center of an epic fight between Google...
Why anyone could win Georgia’s runoff elections, according to the polls
Pope Francis officially updated Catholic teaching, calling the death penalty “inadmissible”