The double standard at play in Katie Hill’s resignation 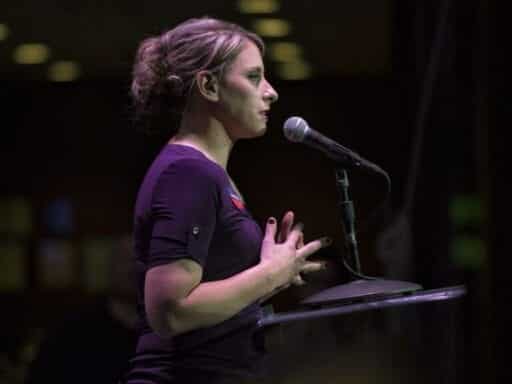 Katie Hill has resigned over a relationship with a campaign staffer. Duncan Hunter is still in office.

Rep. Katie Hill resigned earlier this week after admitting to an inappropriate relationship with a campaign staffer. Meanwhile, Rep. Duncan Hunter, a Republican lawmaker who prosecutors say engaged in five affairs, including one with his own staffer, is still in office.

As Vox’s Anna North has written, the allegations against Hill, one of the first openly bisexual women to serve in the House, are complicated. In addition to engaging in a relationship with a subordinate on her campaign, she’s been accused of having an affair with a current employee on her team, which she’s denied. Additionally, as these accusations have been levied, websites including RedState and the Daily Mail have been publishing censored, naked photos of her without her consent.

The uproar that Hill has encountered over these allegations serves to highlight the double standard that men and women have long faced when it comes to the treatment of their sexuality: Not only were naked photos used to shame Hill — a tactic that’s leveraged overwhelmingly against women — the penalty she faced was far more severe than that experienced by many of her male counterparts.

This is not to say that Hill, herself, should not have resigned, but that others fielding similar allegations — like Hunter — should have to deal with the same consequences. Another example that’s been raised as a point of comparison is President Donald Trump, who’s still in office after more than 20 allegations of sexual misconduct have been brought against him.

“Let’s also speak the truth that men and women are not held to the same standards,” Senator and 2020 presidential candidate Kamala Harris, an ally of Hill’s, recently told BuzzFeed. “I mean, look at who’s in the White House.”

Hill’s conduct was wrong. But we should treat such conduct by men and women the same.

The main allegation that Hill’s case has centered on is an intimate relationship that she and her husband, who she is in the process of divorcing, were involved in with a younger campaign staffer. Hill has admitted to this relationship and noted that it was wrong.

“I know that even a consensual relationship with a subordinate is inappropriate, but I still allowed it to happen despite my better judgement,” she said previously in a statement. The relationship, though it took place during the campaign, could be seen as a violation of House rules instituted in 2018, which include a code of conduct that bars members from engaging in sexual relationships with their staffers.

Prior to Hill’s resignation, the House Ethics Committee had begun an inquiry into her alleged relationship with a current House staffer (which she’s denied).

“Everyone agrees that what Hill did was inadvisable,” says Indiana University law professor Jennifer Drobac. “[She] has perhaps demonstrated poor judgment, but she’s also the victim of really heinous behavior in part by her husband and in part by RedState.” (Hill has alleged that her husband has been involved in leaking the nude photographs. He did not respond to a CNN request for comment.)

As a Twitter thread from writer Jill Filipovic emphasizes, Hill’s decision to resign draws a stark contrast with that of numerous male lawmakers who’ve managed to hang onto positions of power in the wake of sexual misconduct allegations.

Let’s make a list of all of the legislators who have had affairs with subordinates, sexually harassed people, or otherwise engaged in sexual misconduct but are still in office. @ me with names and links.

Hunter’s case offers an obvious parallel: While he’s been forced to relinquish his committee assignments, he’s still a member of Congress and has said he intends to run for office again in 2020. The House Ethics Committee has previously deferred action on Hunter’s case to the Justice Department, which was looking into his handling of campaign funds and found evidence of the affairs that he had engaged in with staffers.

Although Republican lawmakers have typically encountered less party pressure to step down, a number of Democratic men and at least one woman also remain in office despite being the subject of such allegations, including Fairfax, New Mexico State Sen. Michael Padilla and Iowa State Sen. Nate Boulton. Democrats, by and large, have focused on lawmaker accountability in the wake of the #MeToo movement, while Republicans have been more hesitant to speak out on the subject — as demonstrated by the cases of Trump and Kavanaugh.

Not everyone sees an explicit double standard in the way these allegations have been treated, however, since Hill ultimately opted to resign before the results of the internal House investigation could be released.

“Is this a double standard? She made a choice to resign or go through a process whether there’s an investigation or finding,” says Brooklyn Law School professor Minna Kotkin.

Drobac disagrees. “Obviously she has agency,” she told Vox. “But what choice does she have if she’s unable to do her job following this nonconsensual pornography that’s been spread all around her? To call it a choice is to fail to recognize the culture we live in.”

As Hill noted in her resignation letter, her decision to leave office stemmed strongly from an effort to ward off potential attacks that could still emerge. “I know that as long as I am in Congress, we’ll live fearful of what might come next and how much it will hurt,” she wrote. Joe Messina, a Republican radio show host who lives in Hill’s California district, had posted a blog post this week suggesting that he had more than 700 images and notes on Hill from before and after her election.

The response to the allegations against Hill, including press stories that actively spread nude photos of her, also underscores how much society shames women’s sexuality.

“We need to recognize when we are collaborating in the exploitation of women,” says Drobac about the willingness of publications to post the photos of Hill. “The fact that the [public shaming of her] is still possible says as much about our society as it does about the husband.”

“It was clearly meant to embarrass her,” Harris told BuzzFeed News of the photos. “There’s so much that people do about women and their sexuality that’s about shaming them.”

In addition to the naked photos that were used to expose Hill without her consent, her relationship with the campaign staffer was treated as a salacious story. As North writes, the emphasis that RedState posts put on the narrative focused on her sexual orientation and relationship status, as did other pieces. “Swing district: Katie Hill 2020 rivals seize on leaked naked ‘throuple’ photo as campaign issue,” reads one headline from the Washington Examiner.

The framing of these headlines, themselves, underscores the way that the sexuality of prominent women is treated compared to that of men. “Men’s sexuality is valorized and lauded and women’s sexuality is shameful and we penalize it,” says Drobac.

This broader attitude can translate to the response that lawmakers may give when involved in a scandal like this one. While men might be able to shrug it off, women may feel defined by it.

“Once a woman is identified as being engaged in some sort of inappropriate relationship, people jump all over it. It creates a different kind of public reaction than it does with men,” says Kotkin.

Both should be held accountable.

Scott Pruitt’s “tactical pants” scandal, very briefly explained
Officers who knocked elderly man to ground charged with second-degree assault
These 3 Senate Republicans could help decide the fight over the rules of the impeachment trial
As they make their final pitches to New Hampshire voters, Democrats amp up their attacks
How Mike Bloomberg made his billions: a computer system you’ve probably never seen
Action star Steven Seagal was named Russia’s special envoy to the US