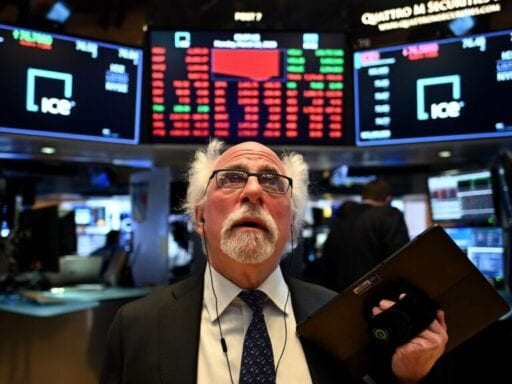 A traders working at the opening bell at the New York Stock Exchange on March 16, 2020. | Johannes Eisele/AFP via Getty Images

More than three years of solid market returns evaporated in a few weeks, due to coronavirus.

“Since my election, U.S. stock markets have soared 70 percent,” President Trump bragged at his State of the Union address in February, before claiming that this bull market was “transcending anything anyone believed was possible.”

Those gains are gone.

On January 19, 2017, the day before Trump took office, the Dow Jones Industrial Average closed at 19,804.72. For much of Wednesday, the Dow dropped below that level, meaning that the rise in stock prices Trump touted so recently — and that he hoped to ride into this November’s election — no longer really exists. (Although, for what it is worth, the markets closed with the Dow slightly above its pre-Trump levels.)

Two caveats are worth making. The first is that the stock market is not the economy. Stock prices reflect investors’ best predictions about what various companies will be worth, and how much those companies will produce in dividends, in the fairly near future. There is little correlation between the value of the Dow Jones index and the rate of US gross domestic product (GDP) growth.

The second point is that better economic indicators, such as GDP growth or job growth, do not support Trump’s claims that he’s been a particularly effective economic steward. At best, they suggest that — at least until very recently — Trump hasn’t done anything to spoil the slow but steady growth that he inherited from President Obama.

This chart, for example, represents US GDP growth from 2009 to 2019. After the Great Recession ended in mid- to late 2009, the US economy has been on a pretty steady upward climb. Neither Trump’s election in late 2016 nor his inauguration in early 2017 appears to have altered this trajectory in any significant way.

The data on unemployment tells a similar story.

Which is not to say that Trump’s policies are entirely irrelevant. As my colleague Matt Yglesias wrote around the time of the last State of the Union address, Trump “made a sensible selection for Federal Reserve chair and has presided over a healthy dose of fiscal stimulus, and his trade policies haven’t been as disruptive as the most alarmist critics warn.” It’s possible that the economy would have fallen further off track without Federal Reserve Chair Jerome Powell’s stewardship, or that growth would have slowed without fiscal stimulus.

But the eye-popping stock market growth that defined the first three years of Trump’s presidency was not felt by the average American. The investor class briefly got richer, as did those with enough money to afford significant retirement savings, while the rest of the country lived in an economy much like the one Obama left behind.

Similarly, Trump does not deserve all the blame for a collapse in stock prices that is largely driven by fears of coronavirus — it’s not like Trump personally created the virus that has now spread into a global pandemic. But the administration’s response to the pandemic has been largely incompetent.

Trump himself is frequently dishonest when he talks about the virus. The United States lags far behind its peer nations in making tests that can screen for coronavirus available to doctors. And the Trump White House dismantled much of the governmental infrastructure that was supposed to help us respond to a pandemic.

So while it is unfair to blame Trump for the mere existence of any economic downturn caused by the pandemic, it is fair to wonder whether the depth of this downturn — not to mention the public health consequences of a largely unchecked disease — will be exacerbated by Trump’s inadequate performance.