The drama over when Pelosi will send Trump’s impeachment articles to the Senate, explained 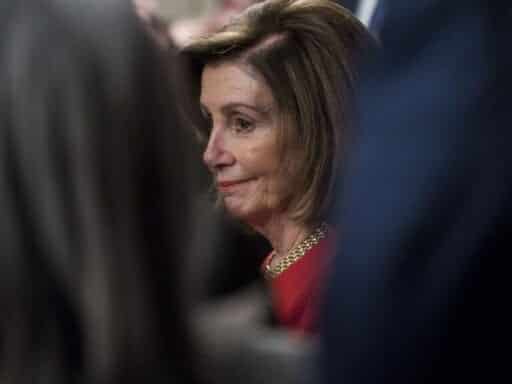 A surprising move from the speaker of the House.

With President Donald Trump now officially impeached, the House and Senate are at an unexpected standoff over what will happen next.

That’s due to Speaker Nancy Pelosi’s surprising announcement late Wednesday that she would not yet take her expected next steps: selecting “impeachment managers” to make her case and officially transmitting the articles of impeachment to the Senate.

At the moment, that doesn’t mean too much, since Congress is leaving Washington for the holidays and the Senate wasn’t going to begin an impeachment trial until January anyway. Still, it leaves the anticipated next step of the impeachment saga — Trump’s Senate trial, which was expected to start (and end) in January — in at least some doubt.

Pelosi said she was hesitant because she doubts that Senate Majority Leader Mitch McConnell will hold a fair trial, based on comments he made last week about being in lockstep with the White House. So, she reiterated Thursday morning, she decided not to act until “we see the process that is set forth in the Senate.”

Meanwhile, McConnell suggested in his own remarks on Thursday that what happens next is really up to Pelosi. He claimed her reluctance to transmit the articles was an admission that her case was weak. And, he said, “If the speaker ever gets her House in order, that mess will be dumped in the Senate’s lap.”

And Trump, who has been eager for the Senate to acquit him, isn’t happy about all this, as he made clear in a tweet Thursday morning:

Pelosi feels her phony impeachment HOAX is so pathetic she is afraid to present it to the Senate, which can set a date and put this whole SCAM into default if they refuse to show up! The Do Nothings are so bad for our Country!

The drama is only increasing, as the New York Times’s Maggie Haberman reported that Trump’s lawyers are “looking at various options for proceeding” with the trial in the Senate anyway, even if the House doesn’t send over the articles. Trump’s lawyers are even reviewing whether he was technically impeached if the articles have yet to be sent to the Senate, Bloomberg’s Jennifer Jacobs and Justin Sink reported.

So, what’s going on?

In part, this is clearly an attempt by Pelosi to try to get McConnell and Senate Republicans to make some concessions to Democrats about how Trump’s trial should be run — specifically with regard to calling witnesses for testimony.

The thinking behind this is that holding up the process might actually give Democrats leverage — because Trump, now that he’s been impeached, desperately wants an acquittal in the Senate. (And his irate reaction on Twitter this morning proves that to be true.)

That’s the idea, but how it plays out will depend on several factors. Will McConnell, the actual key decision-maker here, budge? If he doesn’t, will Pelosi keep holding out? And will Senate Republicans try to respond to Pelosi’s procedural gamesmanship in kind?

What, exactly, is happening here?

Once the House of Representatives impeaches the president, two things are supposed to happen next.

Both are traditionally pro forma steps on the way to the start of the Senate trial.

Except that on Wednesday night, Pelosi suddenly suggested things won’t be so simple. She would not, she said, name impeachment managers or send the articles over “until we see what the process is on the Senate side.”

And on Thursday, the House announced it wouldn’t hold any votes on a resolution regarding the appointment of impeachment managers until after the holidays — that means January 7 at the earliest.

Why is Pelosi doing this?

The justification Pelosi initially offered was that she wanted to wait so she could get a better sense of the Senate’s plans and whether they’d be fair.

She raised one concern (McConnell’s comments) and raised one possible solution (witnesses).

The concern was about statements McConnell made on Fox News last week. “Everything I do during this, I’m coordinating with the White House counsel,” McConnell said December 12. “There will be no difference between the president’s position and our position as to how to handle this.” Democrats found these comments appalling and asserted that the fix was in. Pelosi cited those remarks Wednesday night, saying McConnell had made clear there wouldn’t be a fair trial.

What, exactly, could address this concern? “It’s up to the senators to make their own decision, working together” on how to run the trial, Pelosi said. “Hopefully in recognition that there are witnesses the president withheld from us, there are documents the president withheld from us, and I would hope that information would be available to go to a trial, to the next step.”

This is an apparent reference to a request by Senate Minority Leader Chuck Schumer for testimony from four current or former administration officials: acting White House Chief of Staff Mick Mulvaney, former national security adviser John Bolton, White House aide Robert Blair, and Office of Management and Budget official Michael Duffey. (All of them have knowledge of Trump’s hold on Ukraine aid.)

Indeed, the strategy of passing and withholding the impeachment articles seems to have caught Democrats’ eye after Harvard law professor Laurence Tribe proposed it in a Washington Post op-ed days earlier. This was the tactical justification Tribe offered: that a delay “could strengthen” Democrats’ “hand in bargaining over trial rules with McConnell because of McConnell’s and Trump’s urgent desire to get this whole business behind them.”

Other Democrats have also floated further justifications for withholding the impeachment articles. For instance, Rep. Earl Blumenauer (D-OR) told Politico’s Kyle Cheney that a trial delay would let the House continue its investigation, strengthen its case, and further contest matters in court. And Brian Beutler of Crooked Media has argued that the impeachment push should be slowed down and expanded to other topics.

But it’s unclear whether Pelosi shares these objectives. Previously, it has seemed that she wants to get impeachment over with — not to expand it to other topics or to spend months on court battles. It’s possible her thinking may have shifted on this, but that certainly would be a change.

How are McConnell and Trump going to respond?

Just one week after McConnell announced there would be “no difference between the president’s position and our position as to how to handle” impeachment, a difference became evident.

Trump responded to Pelosi’s move by insisting that the Senate could move forward with the trial and his acquittal whether Pelosi okays it or not. The Senate, Trump tweeted, “can set a date and put this whole SCAM into default if they refuse to show up!”

And that may not be entirely far-fetched. Ross Garber, an attorney who’s an expert on impeachment, has argued that the Senate can set a deadline for the appointment of impeachment managers and the transmission of the articles.

But McConnell, who did not seem inclined toward that approach, gave a more cautious response.

According to NBC’s Geoff Bennett, McConnell said Thursday that it was “beyond me” how Pelosi and Schumer “think withholding the articles of impeachment gives them leverage.” He added: “Frankly, I’m not anxious to have the trial,” and that if Pelosi “thinks her case is so weak she doesn’t want to send it over, throw me into that briar patch.”

Now, neither Trump nor McConnell showed any indication they were in the mood to make concessions to Democrats regarding witnesses and the trial. But there was a clear discrepancy. McConnell wants to yawn at Pelosi’s move and let his Senate spend the time doing other things. Trump, though, wants Republicans to hit back with some procedural radicalism of their own so they can clear his name more quickly.

It’s not the first time Trump and McConnell have disagreed on impeachment. Trump hoped to use the trial to call witnesses such as Hunter Biden or Adam Schiff, to let his legal team grill them. But McConnell argued privately that this would be a mistake, that there wasn’t support for this among moderate Republican senators, and that the better approach would be to have no witnesses at all and just get to a quick acquittal. McConnell reportedly brought Trump around on this, though, so he could do the same with regards to Pelosi’s position.

How does this end?

It’s entirely possible that this is much ado about not very much.

McConnell and Schumer met Thursday to discuss how the trial would work. It is possible they will reach some kind of agreement that Pelosi deems sufficient, and that we proceed on schedule to a January trial in the Senate.

Also, some tea-leaf readers interpreted a newer set of comments from Pelosi on Thursday as somewhat downplaying what she said on Wednesday night. As CNN’s Manu Raju, Ted Barrett, and Jeremy Herb wrote:

Pelosi was careful Thursday not to say at her news conference that Democrats must get a “fair” trial before transmitting the articles. That’s a different tone than Wednesday night when Pelosi suggested that they needed to have a fair trial before deciding whether to submit the articles to the Senate.

This could be mainly a bluff, or a bit of mischief, from Pelosi. She has room to do this because the trial isn’t going to start anyway because of the holidays. But she may think that seriously delaying the trial with a procedural trick could be too tough to defend.

Still, the issue of witnesses could be difficult to reach an agreement on. McConnell’s private position is that he wants no witnesses. Publicly, he’s taken the position that any decision on witnesses should be put off until after the trial begins, which is how the Senate handled it in 1999. But Schumer and Pelosi are demanding a commitment on witnesses now.

Which leads us to the second possibility, that Pelosi isn’t bluffing. That she, and Democrats, should be and are happy to delay the trial if they can’t reach a deal they find sufficient — because no trial means no acquittal. Indeed, Tribe argued that impeachment itself is enough, and that McConnell’s trial would be so compromised it would “fail to render a meaningful verdict.”

Still, an indefinite holdout by Pelosi won’t necessarily be the end of the story either. Democrats will surely be hammered for playing political games with impeachment (though they will try to argue it’s McConnell who’s inappropriately politicized the process). The tactic could also backfire by annoying the swing-state and Trump-critical GOP senators whose votes Democrats would need for any impeachment measure.

McConnell could stick to his current position, too, and say he’s fine not having a trial. (That would be nice for his own senators facing tough reelection fights, like Susan Collins of Maine and Cory Gardner of Colorado). Or McConnell could be driven toward Trump’s position and attempt to set a deadline or move forward with a trial, rather than given in to Pelosi’s demands.

Of course, none of this is likely to change the actual outcome of any trial. It takes 67 votes to remove a president, and Democrats only have 47 senators — 20 Republicans would have to defect. (Zero did in the House.) But it has created some intriguing last-minute drama over how the trial will look — and whether there will be one at all.

The 2020 presidential election
Trump’s lawsuits challenging the election have turned into a clown show
Why some conservatives are rethinking libertarian economics
Trump is freezing Obama’s fuel economy standards. Here’s what that could do.
Trump’s intelligence chief suspends in-person election security briefings
Klobmentum could be happening in New Hampshire

The brightest minds, the deepest thinkers, one important topic