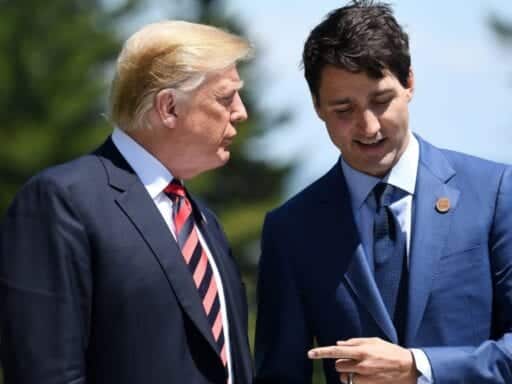 Trump told Bloomberg he won’t compromise with Canada but believed the remarks wouldn’t get out. They leaked to the Toronto Star.

Negotiations between the United States and Canada on NAFTA got a bit of an unexpected wrinkle to them this week when off-the-record comments President Donald Trump made in an interview with Bloomberg were leaked. He told reporters, believing what he said would never be made public, that he’s not going to compromise with Canada. Those comments got out anyway.

Bloomberg put out a transcript of the sit-down, but that excluded portions of the conversation that were “off the record,” meaning there was a clear understanding between Trump and the reporters that what he said could not be made public. Asking for remarks and information to be off the record — and journalists granting it — is common practice in journalism.

But some of Trump’s comments leaked. Daniel Dale at the Toronto Star published them on Friday, revealing that Trump said “off the record” that he’s not compromising with Canada on NAFTA but can’t say it publicly because “it’s going to be so insulting they’re not going to be able to make a deal.”

Trump took to Twitter to complain about the leak on Friday, saying Bloomberg had “blatantly violated” their agreement and asking for an apology. It’s not clear how the comments reached Dale, or whether anyone at Bloomberg was actually responsible for it.

Wow, I made OFF THE RECORD COMMENTS to Bloomberg concerning Canada, and this powerful understanding was BLATANTLY VIOLATED. Oh well, just more dishonest reporting. I am used to it. At least Canada knows where I stand!

Still can’t believe that Bloomberg violated a firm OFF THE RECORD statement. Will they put out an apology?

Trump’s tweets seem to confirm the veracity of the remarks reported by the Toronto Star.

Trump on Monday announced a new preliminary trade agreement between the United States and Mexico and suggested it could replace the North American Free Trade Agreement, a trade deal between the US, Mexico, and Canada that’s been in effect since 1994. Canada, however, wasn’t in this new potential deal.

The US and Canada have been trying to reach an agreement, but as Vox’s Jen Kirby explains, there are some sticking points: intellectual property rights, Canada’s import controls on dairy, and Chapter 19 of the original NAFTA, which dictates how the two countries resolve trade disputes related to anti-dumping and countervailing duties.

The Trump administration set a self-imposed deadline to make a deal by Friday, but it didn’t, and negotiations continue. Any new NAFTA deal would have to be approved by Congress.

“We’re making progress. We’re not there yet,” Freeland said on Friday at a news conference.

Talks will resume on Wednesday, and when they do, they’re likely to be a little awkward, given the off-the-record leak. Here’s what Trump reportedly said, according to the Toronto Star:

“Here’s the problem. If I say no — the answer’s no. If I say no, then you’re going to put that and it’s going to be so insulting they’re not going to be able to make a deal … I can’t kill these people,” Trump said of the Canadian government.

In another remark he did not want published, Trump said that any deal with Canada would be “totally on our terms.” He suggested he was scaring the Canadians into submission by repeatedly threatening to impose tariffs on imports of Canadian-made cars.

“Off the record, Canada’s working their ass off. And every time we have a problem with a point, I just put up a picture of a Chevrolet Impala,” Trump said. The Impala is produced at the General Motors plant in Oshawa, Ont.

But that didn’t make it into Bloomberg’s reporting, because it was off the record. This is the on-the-record exchange that the publication did put out:

BLOOMBERG: Could you tell us if tomorrow comes and goes, what happens to Canada? What will happen if Canada has…

TRUMP: I think Canada’s going to make a deal at some point. It may be by Friday, or it may be within a period of time. But ultimately they have no choice.

BLOOMBERG: Do you think that they’ve reached a tentative deal right now? Does Lighthizer have something cooking pretty close?

TRUMP: I think we’re close to a deal, yes.

Canadian officials reportedly found Trump’s off-the-record remarks reflective of their negotiations and brought them up at a meeting with US officials on Friday.

Trump frequently attacks the press and has declared reporters the “enemy of the people,” and he’s using the Bloomberg leak to bolster his anti-media rhetoric. He tweeted complaints about Bloomberg on Friday and said the leak was an example of “more dishonest reporting.”

At a speech later in Charlotte, North Carolina, Trump also reflected on the leak. “These are very dishonorable people, but I said, in the end it’s okay, because at least Canada knows how I feel,” he said. “So it’s fine. It’s fine, it’s true.”

As the Toronto Star explains, Bloomberg made the agreement to keep Trump’s remarks off the record, but the Star, which “obtained the quotes from a source” isn’t bound to that agreement. There’s been a lot of speculation as to how the remarks might have gotten out, but it’s not certain that it even came from Bloomberg — it could have been from the White House, too.

The Canadians appear to be taking it in stride. Canadian Prime Minister Justin Trudeau, who according to the Star was in Oshawa when all of this took place, said he would “only sign a deal if it is a good deal for Canada.”

“Over the past year and a half, there’s a lot of things that have been said from time to time,” Trudeau said. “I think people have noticed that our government’s approach is always to stay constructive, positive, to engage on the substance of issues, and to demonstrate that we understand that the path forward is one of making sure there’s a win-win-win on all sides.”

Trump in an early morning tweet on Saturday said he loves Canada but complained they’ve “taken advantage” of the US.

I love Canada, but they’ve taken advantage of our Country for many years!

Presidents hate to look sick. Trump has never needed to appear strong more.
The bogus “Momo challenge” internet hoax, explained
Overfishing is decimating sharks. This map shows where sharks and fishing boats cross paths.
In these uncertain times, Degrassi is the ultimate comfort
UK Prime Minister Boris Johnson is in intensive care as his coronavirus symptoms worsen
A judge may have saved thousands of Wisconsin voters from being disenfranchised by coronavirus