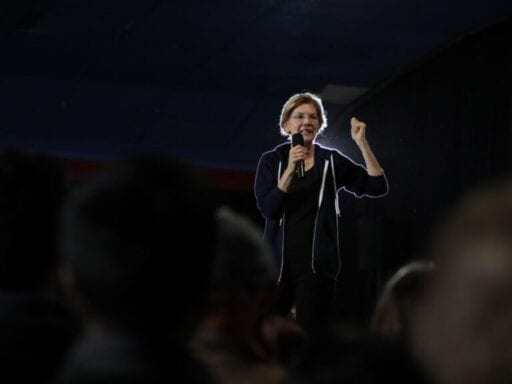 Elizabeth Warren being paid for her work is inexplicably controversial.

Sen. Bernie Sanders sold a lot of books and Rep. Alexandria Ocasio-Cortez got an expensive haircut and now Sen. Elizabeth Warren was compensated for her legal services. All of these matters have generated a lot of chatter and media coverage in recent months, because progressive politicians apparently are supposed to eschew … money.

It was Warren who ignited the latest iteration of this progressive impurity news cycle over the weekend when on Sunday she detailed how much she was paid for private legal work she performed over three decades.

The Massachusetts Democrat’s presidential campaign revealed that she made $1.9 million from 1985 to 2009, the bulk of which she made from 1995 on, the same year she accepted a permanent position as a law professor at Harvard. Warren is a bankruptcy expert — an issue she’s talked about often throughout her political career — and much of her private sector work was related to that, as a consultant, an expert witness, and a mediator, amid other roles.

Warren had already released 10 years of tax returns, and in May, she also disclosed a list of her clients and a description of her legal work. But amid an ongoing back-and-forth with South Bend, Indiana, Mayor Pete Buttigieg’s presidential campaign and his refusal to talk about his work at consulting firm McKinsey or release details about his high-dollar fundraisers, she has now taken her disclosures a step further.

The Warren camp’s thinking appears to be that the more transparency, the better, and that this ups the pressure on Buttigieg to be more forthcoming about his activities — or reinforces a contrast between the pair. But Warren’s disclosure has also opened her up to more scrutiny and refocused the discussion on her, even though the money she made was nice for her bank account, but not a life-changing amount in her prosperous career. Two million dollars across 30 years is about $65,000 a year; across 15 years, it’s a bit more than $130,000.

But given this narrative that keeps popping up that any sign a progressive politician has money is a negative, Warren facing at least some backlash on this front seems inevitable. The situation also highlights what has become a bit of a pattern in Warren’s presidential campaign: she seems to be hypersensitive to public criticism and has a tendency to over-correct in her responses. And those responses sometimes open her up to more criticism, not less.

The information released by Warren’s campaign details a range of companies and cases she consulted on over the years. Some of it she did for free, some of it she did for a few thousand dollars, some was over $100,000. Some of the names she was involved with are familiar ones — Sears, Enron, Bank of America — but many are not.

It’s not uncommon for professors like Warren to do work for private clients while they’re also working in the academic realm. Harvard, specifically, lays out guidelines academics are supposed to follow to avoid potential conflicts of interest while doing outside work. The system isn’t exactly cumbersome, and most of the time, it just depends on the individual as to whether they do outside work and how much.

“The range of consulting incomes across faculty varies enormously. Some faculty, even in fields with good opportunities, never consult. But others, especially in fields like law, business, economics, medicine, or computer science, might earn hundreds of thousands per year (or even substantially more in some cases). So, earning large fees, especially for a law professor, is not, per se, unusual or any reason for alarm of any kind,” said Jeff Miron, an economist at Harvard. He added that faculty are supposed to adhere to reporting and “one day per week” rules that are supposed to address conflict of interest and conflict of commitment, but generally, it’s pretty lax. “In my years, I have never heard of any accused of violating, let alone punished.”

To be sure, it’s fair to look at the type of work Warren did on a case-by-case basis — for example, she made about $75,000 consulting for a case involving a creditor to failed energy company Enron. But regardless of the ins and outs of the details, the type of work she was doing was par for the course. She was a private citizen and one of the country’s leading bankruptcy experts, and being compensated fairly for her expertise makes sense.

In listing out how much money she made in corporate and legal consulting, Warren appears to hope she’s putting criticism to bed and can contrast herself with other, less-forthcoming figures. But that’s not exactly what’s happening here — it’s not as though her critics are going to say oh, okay, well now she’s great and you should vote for her. And the press coverage of her disclosure hasn’t exactly been positive, especially if readers don’t get beyond the headline.

Warren pays close attention to knocks against her and responds to them, potentially to a fault. Case in point: the Native American DNA test and her Medicare-for-all plan were both reactions to critiques from her opponents that went over worse than her campaign had probably hoped.

And her latest release seems to have a similar origin story: It appears to have been prompted by tensions with Buttigieg that have bubbled up in recent days. He has refused to provide details about the work he did at multibillion-dollar consulting firm McKinsey in his nearly three years, and he’s keeping details about his big-dollar donors under wraps. Warren has criticized him, namely on the fundraising issue.

“It is even more important that candidates expose possible conflicts of interest right now,” Warren said in an interview when asked about Buttigieg’s McKinsey work last week. “And that means, for example, that the mayor should be releasing who’s on his finance committee, who are the bundlers who are raising big money for him, who he’s given titles to and made promises to.”

The Buttigieg camp has reacted by criticizing Warren’s own private sector ties and pushing her to release her tax returns from before 2008. According to Politico’s Alex Thompson, Warren’s campaign says releasing a breakdown of her earnings actually provides more details into how much she made than her tax returns would.

Given the growing animosity between two campaigns and with primary season approaching, it’s unlikely Warren’s maneuver is going to satisfy the Buttigieg campaign, and she might just be stuck on a slippery slope where every time she a little bit, they push for her to give more. That camp — not to mention Democratic voters further to the left — is going to find areas to criticize her, including on this, anyway.

No progressive is entirely pure, but the efforts to paint them as secret money mongers can get ridiculous

It is fair to scrutinize the record of Warren or any presidential candidate, including who she’s worked for in the past and in what capacity. And Warren is campaigning on a sweeping anti-corruption message that makes any of her ties to corporations or moneyed interests, now or in the past, perhaps more enticing to take a look at. But that doesn’t mean we should all be setting our hair on fire because at one point this woman had a job.

It’s a rather disingenuous narrative that often plays out on the left when it is revealed that a progressive political figure is not, I don’t know, living under a bridge. Earlier this year, we spent a news cycle talking about Sanders, a critic of the “millionaire and billionaire” class, becoming a millionaire himself. (Sanders responded to his detractors by pointing out he’d just written a best-selling book: “If you write a best-selling book, you can be a millionaire, too.”) And every few months, we see a flurry of stories, often coming from the right, about how Ocasio-Cortez might be secretly rich or is spending too much on her clothes, apartment, or even haircut.

But just because you promote progressive policies does not mean you have to drop out of the economic system altogether. Books are sold for money, some of which goes to the person who wrote it. Women’s haircuts, especially in big cities, are often expensive.

When someone offers professional services, it would be weird if they weren’t compensated. And it’s hard not to wonder whether there’s a gendered element to the criticism of Warren — would we criticize a man for being paid for his work? Donald Trump has been president for nearly three years, and we haven’t seen his tax returns and know very little about his business dealings, past and present. Maybe instead of worrying about how much AOC’s dress cost, it would behoove everyone to remember that.

The CDC calls for quarantining even after a negative test. The White House isn’t listening.
“They’re all Americans”: What Biden gets about the pandemic that Trump doesn’t
Stephen Miller is a product of “chain migration,” his uncle says
What "Ouija" actually means, and how the game has changed
E. Jean Carroll says Trump sexually assaulted her. Now she’s suing him.
America’s child welfare system was already failing. The pandemic could weaken it further.