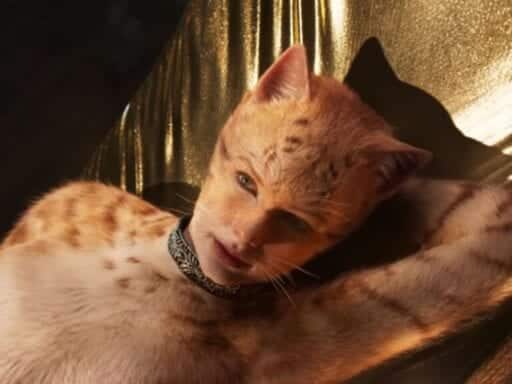 This movie is indescribable. Let’s try.

Truly, the most spectacular movie of the holiday season is Cats, and I write this half-expecting the movie’s marketers to use that as a pull quote on the poster. There’s simply no better word to describe this fantasia. The trailer, featuring very famous people with cat fur and unnervingly placed tails singing songs from the 1981 Andrew Lloyd Webber musical, broke the internet and people’s brains. Rarely have I been at a party in the last few months without the conversation turning to Cats.

Now I’ve seen it, and my own brain feels turned to glitter, much like the sequined blue cat ears on a headband I was handed at the press screening. It is ludicrous and kind of divine, furry and flabbergasting, absurd and, in some moments, weirdly touching. It is a film that resists ordinary treatment and, especially, ordinary reviews.

I left without any idea of what I thought, only that I was exhilarated and baffled and kind of impressed, all at once. I had no idea what to say, only observations and questions written in my notebook, many of which conflict with one another. I present them now, with a whisker of editing, for your contemplation.

Things you will see, and maybe never unsee, if you watch the movie Cats

James Corden, a.k.a. Bustopher Jones, eating everything in sight in a dumpster, as if he is Templeton the Rat in Charlotte’s Web.

Jason Derulo as Rum Tum Tugger, shimmying his hips from side to side as if butt-bumping invisible buddy-cats.

Rebel Wilson, who plays lackadaisical house cat Jennyanydots, unzipping her cat suit to reveal another cat suit below it, but that one is bedecked in a jazzy pink sequined suit.

Not one, but two instances of cats getting hit in their (perfectly smooth, Barbie-like) groins and crying out in pain.

A surprisingly moving scene of Jennifer Hudson, as the beleaguered street cat Grizabella, absolutely losing it singing “Memories,” in a scene director Tom Hooper clearly pegged as the parallel to Anne Hathaway’s “I Dreamed a Dream” in his 2012 Les Misérables adaptation.

Jennifer Hudson being taken away to heaven in a chandelier attached to a hot air balloon.

Judi Dench sternly explaining that cats are not dogs.

Things you will not see in the movie Cats

Questions I have after watching the movie Cats

Is Cats a good movie?

Is it a bad movie?

Is the answer to both “yes”?

Why is there a whole movie just about taxonomies of cats, with a side plot about one lucky cat’s life literally ending, opening against the ninth canonical Star Wars movie?

Why can’t Tom Hooper get through a single song without cutting every two seconds to a new shot? What does he have against letting us watch things happen for a little while before changing perspective?

Why, if they built giant sets so that the normal-sized people were cat-sized, are the cats exactly the size of ferrets?

Why exactly does “Beautiful Ghosts,” the song that Andrew Lloyd Webber (who wrote the original stage show in the 1980s) and Taylor Swift (who plays the slinky Macavity ally Bombalurina), sound so incredibly unlike the rest of the songs in the show? Shouldn’t Webber have been able to figure that one out?

Will “Beautiful Ghosts” win an Oscar?

Who is the evil genius who thought, You know what? Let’s make a piece of avant-garde performance art, cast a bunch of stars in it, and call it a blockbuster? How can I pledge that genius my fealty?

Given how much CGI is being used here, how much of the dancing is really, actually good, and how much just got fixed in post-production? Is the lurking sense that this is all just animation the reason why none of the performances seem particularly amazing, except Hudson’s and McKellen’s?

How — how — was a show this bizarre and plotless, with songs this mediocre, one of the most successful Broadway shows of all times, on both sides of the pond? What was happening in the 1980s?

Is Cats … like … a secret metaphor for something? Why can’t I figure out what it is?

Will this movie make all the money, or none?

Will the earnestly supportive parents of theater kids who take their teens to the movies over the holiday ever speak to their children again?

Did I love this movie?

What the hell is a Jellicle?

Final verdict on the movie Cats

It’s literally incredible. I hope I never see it again.

Cats opens in theaters on December 19.