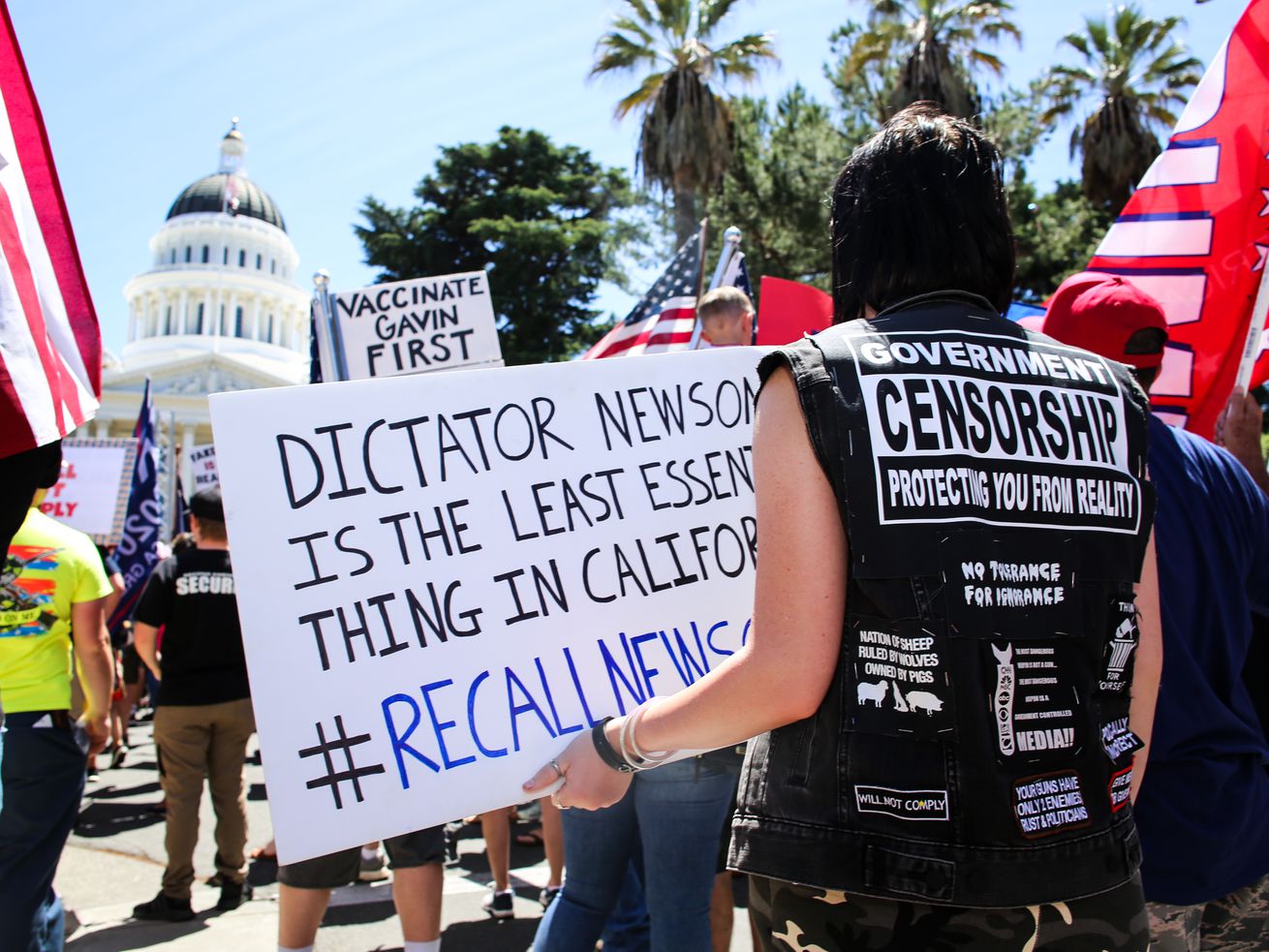 Covid-19 made governors popular, until it didn’t. Now, California’s Newsom will have to stand in a recall election, likely later this year.

One and a half million. Or, to be more exact, 1,495,709. That’s how many signatures were needed to force California Gov. Gavin Newsom into a recall election.

As of Monday April 26, the recall effort has officially garnered that many — and more. Thus far they’ve tallied over 1.6 million signatures, clearing the threshold with room to spare, meaning Newsom, a Democrat, will be back on the ballot this year.

Thanks to the state’s affinity for direct democracy, a judge’s order extending the deadline to collect signatures, and Newsom’s much-discussed decision to attend a $350-a-person, unmasked, indoor dinner party — all of which catalyzed resentments governors around the country are facing over Covid-19 restrictions — Newsom, has found himself in a precarious position as he juggles several different crises.

The recall’s success so far doesn’t mean Newsom will necessarily lose his job, it just puts the question to the voters in an election that will happen likely near the end of the year. A poll from Probolsky Research surveyed 900 voters March 16-19 and found 40 percent of voters in favor of the recall effort and 45.7 percent opposed.

The ballot will ask two questions: If voters want to recall the governor, and who should replace him in the event that the majority votes to recall. Hundreds of people could decide to run, as California has no candidate cap during recalls, and the winning candidate only needs a plurality to claim victory. Most notably, Caitlin Jenner has announced her intention to challenge Newsom.

The last time a California governor was successfully recalled was in 2003, when another celebrity, Arnold Schwarzenegger, managed to snatch a win from then-Gov. Gray Davis and over 100 other candidates.

“It’s an expensive, distracting pain in the ass for Californians,” Dan Newman, a spokesperson for Newsom, told Vox. “In the Davis recall we had 135 candidates and it was a total circus. Some people think we could have 10 times as many candidates this time around.”

FiveThirtyEight’s February analysis indicated that “Newsom seems well positioned to survive” a potential recall election, as California’s electorate has become a lot more Democratic since 2003 when Davis lost his seat.

Additionally, Davis’s approval rating was in the low 20s and, importantly, his disapproval rating was in the high 60s, whereas recent polls have Newsom’s favorability rating between 46 and 52 percent. A different poll conducted by six California TV stations and Emerson College released March 15 had only 38 percent of the state in favor of voting to recall the governor, with 48 voting to keep him — but there’s 13.9 percent who say they’ve yet to make up their minds.

Recall organizers argue that it’s more important to note that Newsom’s favorables have been trending down, which they view as an indication that he has further to fall. And Newsom is facing the challenges of vaccine distribution, a worsening homelessness crisis, and getting kids back into school as quickly as possible, so they say there’s ample opportunity for his support to drop.

“If [Newsom] wants to project out that he’s not in a vulnerable position and pooh pooh the fact that he is in trouble and that he has upset his constituents, I’m okay with that. That’s tone deaf. There’s plenty of evidence that he is in trouble,” Anne Dunsmore, co-chair of Rescue California, one of the committees working to recall Newsom, told Vox.

The French Laundry affair, direct democracy, and a stroke of legal luck

So, if Newsom is still reasonably popular, why is he facing a recall election?

There are some structural reasons: Only 19 states allow citizens to recall their public officials. In California, the only requirement is that 12 percent of the total number of voters in the previous election sign on to the effort, and that those signatures are from voters in at least five counties. And recall efforts are incredibly common in the state — every single governor since Reagan has had recalls filed against them, and this is the sixth effort Newsom himself has faced.

California has a strong culture of direct democracy. Citizens are used to voting on dozens of ballot measures which allow them to legislate by popular will, and are the only electorate since 1921 to have ever recalled their state’s chief executive. Born out of the post-Gilded Age progressive movement, “direct democracy, for better or for worse, has become California’s most distinctive and emblematic political institution. Initiative, referendum, and recall elections were added to the state constitution in 1911,” writes San José State University historian Glen Gendzel.

So, California governors are much more at the whim of their electorate than other governors. Anger with Covid-19 orders fueled many of the recall efforts against governors in 2020: Republican Govs. Mike Dunleavy of Alaska, Doug Ducey of Arizona, and Brad Little of Idaho, and Democratic Govs. Jared Polis of Colorado, John Bel Edwards of Louisiana, Gretchen Whitmer of Michigan, Tim Walz of Minnesota, Steve Sisolak of Nevada, Phil Murphy of New Jersey, Kate Brown of Oregon, and Tony Evers of Wisconsin all have faced recall efforts.

But none of these governors have been forced into a recall election. In fact, none of these states have ever successfully recalled a governor; only California and North Dakota carry that distinction.

But even so, Newsom might have been fine — were it not for the pandemic. The recall petition Newsom is facing now was actually filed on February 21, 2020, weeks before a state of emergency was declared in response to Covid-19. As a result, the petition itself doesn’t even mention the crisis. Instead, it cites some traditional grievances like high taxation and the state’s homelessness crisis as well as many traditionally Republican complaints like accusing the governor of imposing a “sanctuary state status,” failing to “enforce immigration laws,” and overruling “the will of the people regarding the death penalty,” among others.

Without Covid-19, however, the petition would likely be languishing in obscurity. In November, nine months after its supporters had begun gathering signatures, the Sacramento County Superior Court issued a final judgment extending the deadline to collect signatures. The Court writes that in light of the various stay-at-home orders, it had become “extremely difficult for petitioners to engage in signature-gathering activities for their proposed initiative.”

On November 17, recall organizers told the Daily Caller that they had only collected 749,196 signatures, which even with a 100 percent validity rate wouldn’t have come close to succeeding.

But Newsom can’t put all the blame on Covid-19 — on November 6, while a stay-at-home order that limited outdoor gatherings to three different households was in effect, he attended a birthday party at French Laundry, unmasked, along with people from several households. While the governor’s team initially claimed that the dinner at the three-Michelin-star restaurant was outdoors, on November 18, Fox 11 obtained photos of the governor indoors with several other guests, none of whom appeared to be masked.

EXCLUSIVE: We’ve obtained photos of Governor Gavin Newsom at the Napa dinner party he’s in hot water over. The photos call into question just how outdoors the dinner was. A witness who took photos tells us his group was so loud, the sliding doors had to be closed. 10pm on @FOXLA pic.twitter.com/gtOVEwa864

Newsom’s hypocrisy and decision to dine at a $350-per-person establishment while so many of the state’s residents suffered from the economic downturn and residents were being warned against holiday gatherings with family was a mobilizing moment for the recall effort.

Even Newsom’s spokesperson acknowledged it was a good organizing tool due to the attention it received — even as he deflected blame onto the country’s partisanship. “More than 6 million people in California voted for Trump, so there’s no shortage of people willing to sign something saying get rid of every Democrat if you give them enough time,” Newman told Vox.

That dinner may end up costing the governor more than a few hundred dollars.

Who’s behind the recall effort?

Unsurprisingly, all public evidence indicates that the organized effort is Republican-dominated: Most of the major donors are Republicans, all of the notable endorsers are Republican, and a few of the grievances in the petition itself are issues usually cited by the right — hostility toward immigration and favoring the death penalty, in particular.

Significant endorsements of the effort have come almost exclusively from Republicans — Newt Gingrich, former Republican Speaker of the House, former Arkansas Gov. Mike Huckabee, and Newsom’s 2018 opponent, John Cox, have all lent their voices in favor of recalling Newsom. There are no comparable Democratic endorsements.

The quarter-million from the RNC isn’t the only big money. According to CalMatters, several GOP donors have given hundreds of thousands to the effort. However, the largest single donation thus far has come from John Kruger, an “Orange County entrepreneur… [who] has donated to both GOP and Democratic candidates.” Kruger gave $500,000 to the effort. There are also other big names involved like venture capitalists Chamath Palihapitiya and David Sacks.

The LA Times reported last month that a few far-right extremists were involved in some of the efforts to collect signatures. Organizers deny they are systematically courting these extremists or that they make up a large faction within the supporters of the movement.

“This is not a right-wing extremist movement. This is a movement of the people of California,” Mike Netter, founding member of one of the committees to recall Newsom, told Vox.

But even if the organized effort is Republican-dominated, that doesn’t mean that Democratic and non-affiliated voters aren’t growing disillusioned with the governor. In a Berkeley Institute of Governmental Studies poll released February 2, Newsom’s approval rating was underwater among registered voters, with 46 percent approving and 48 percent disapproving of the job he was doing.

Only 31 percent of Californians agreed that Newsom was doing “an excellent or good job in handling the pandemic overall,” down from 49 percent last September. However, 49 percent of voters felt it would be bad for the state to hold a special election recalling the governor.

For Newsom, his political career is riding on his ability to oversee a competent vaccine distribution program, ensure that kids can get back to school quickly come fall, and preside over a rebounding economy.

Kavanaugh bragged about his clerks’ diversity. His legal record is another story.
Know your rights: The biggest threat to voting is not knowing the rules
The UK government’s own assessment of what a no-deal Brexit looks like is dire
Georgia’s Republican secretary of state has now certified Biden’s win
Thousands of titles from 1924 just entered the public domain, including Rhapsody in Blue
Baby Yoda: the Mandalorian’s adorable alien co-star, explained