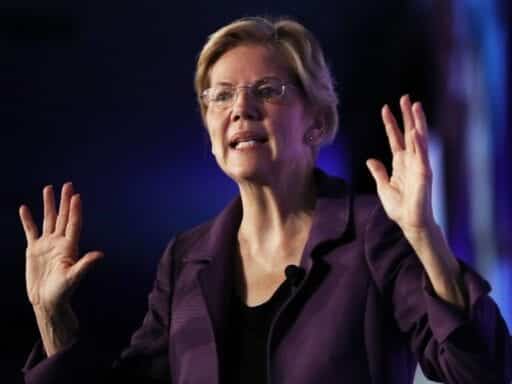 Share
Loading...
A story Elizabeth Warren tells about pregnancy discrimination early in her career is under the microscope. | Mario Tama/Getty Images

A story Warren tells about an early moment in her career is under scrutiny.

Sen. Elizabeth Warren’s rise in the polls in the Democratic presidential primary race has brought increased scrutiny of her past, including whether she was let go from a teaching job in 1971 for being pregnant. Warren has been telling the story for years. Now, some circles are questioning the veracity of her claims, and she is sticking by them.

Here’s what’s happening: Warren, like many politicians, often tells her personal story on the campaign trail, and has throughout her political career. Part of that story is an anecdote about her first teaching job as a speech pathologist for special-needs children in New Jersey. She was hired for the 1970-’71 school year by the Riverdale Board of Education of New Jersey but says she didn’t get a job the following year because she was visibly pregnant with her daughter, Amelia.

She describes it as a pivotal moment in her life: After losing the teaching job, she would later go to law school and eventually land at Harvard, the Consumer Financial Protection Bureau, and in the United States Senate.

Except some media outlets are claiming Warren’s version of events isn’t accurate. On Monday, the conservative website the Washington Free Beacon published a report it says counters Warren’s claims. The outlet surfaced a copy of minutes from a board of education meeting in April 1971 showing a unanimous vote to extend Warren’s teaching contract (her exit followed two months later in June). People have also surfaced a 2007 interview in which Warren paints the scenario in a different light.

None of this necessarily counters Warren’s story — she likely wouldn’t have been visibly pregnant in April, but would have in June, and Warren is sticking by her story. “All I know is I was 22 years old, I was six months pregnant, and the job that I had been promised for the next year was going to someone else. The principal said they were going to hire someone else for my job,” she said in an interview with CBS News on Monday. Warren also defended her claims on Twitter.

This was 1971, years before Congress outlawed pregnancy discrimination—but we know it still happens in subtle and not-so-subtle ways. We can fight back by telling our stories. I tell mine on the campaign trail, and I hope to hear yours.

The matter has stirred controversy among Warren’s detractors, who say, like her claims of Native American heritage, this demonstrates a penchant for bending the truth, and among her supporters, who argue that her story stands up. It also shows the rough terrain Warren now faces as she cements her status as one of the frontrunners in the 2020 presidential race. But beyond that, the matter brings into focus a broader problem women face: discrimination in the workplace.

Warren’s claims and the controversy around them, explained

After graduating from the University of Houston in 1970 with a degree in speech pathology and audiology, Warren moved with her then-husband, Jim, to New Jersey after his job transferred him there. She was subsequently hired by the Riverdale Board of Education of New Jersey, but after a year on the job, she says she was let go.

“By the end of the school year, I was pretty obviously pregnant,” Warren wrote in her 2014 book, A Fighting Chance. “The principal did what I think a lot of principals did back then — wished me good luck, didn’t ask me back for the next school year, and hired someone else for the job.”

She tells the anecdote on the campaign trail often.

But on Monday, the Free Beacon cast doubt onto Warren’s story after finding minutes of an April 21, 1971, school board meeting in which a second-year teaching contract for her was approved. Then, minutes from a separate board meeting on June 16, 1971, say that her resignation had been “accepted with regret.”

The Free Beacon and others also pointed to a 2007 interview Warren gave at the University of California Berkeley in which her account of what happened omitted being let go by the principal.

“I worked in a public school system with the children with disabilities. I did that for a year, and then that summer I didn’t have the education courses, so I was on an ‘emergency certificate,’ it was called,” Warren said at the time. “I went back to graduate school and took a couple of courses in education and said, ‘I don’t think this is going to work out for me.’ I was pregnant with my first baby, so I had a baby and stayed home for a couple of years.”

CBS News delved into the controversy and found other pieces of evidence that reference Warren’s personal life, but no firing:

Local newspaper reports from 1971 also present reasons for her leaving the school alternative to what she describes on the trail. The Paterson News, a local paper, reported that summer that Warren was “leaving to raise a family.” The next month, a story about the school board hiring a replacement said Warren had “resigned for personal reasons,” even though the board had voted to “appoint” Warren to the same speech pathology job that April, according to an earlier report.

Minutes also show that board granted her a provisional certificate in speech pathology in November 1970.

Warren told CBS News that entering into politics had led her to “open up” about “different pieces in my life,” including this episode, and she stands by her version of the story. The outlet also spoke to two retired teachers who worked at the same school. They said they don’t remember anyone being explicitly fired for being pregnant, there was little job security for pregnant women at the time. One former teacher said pregnant women were expected to leave “at five months.”

The senator’s defenders also note that her timeline adds up: In April, she would have been four months pregnant and therefore not visibly so, but in June, she would have been six months pregnant and unable to hide it. Her daughter was born in September. Some people also pointed to a June 1972 Associated Press article about how New Jersey’s civil rights division ruled that pregnant teachers couldn’t be pushed out of the classroom.

Eliana Johnson, editor-in-chief of the Free Beacon, said in a phone interview that the documents the publication uncovered “seem to undercut” Warren’s story, though they doesn’t necessarily mean she was lying. She tied this instance to broader pressure political candidates on both sides of the aisle seem to face to craft “foundational myths” about themselves and sometimes bend the truth, such as Ben Carson claiming he got a West Point scholarship and Richard Blumenthal misrepresenting his military service. “It seems to me that these sorts of claims, whether it’s Democrats or Republicans making them, warrant scrutiny,” she said.

Warren’s campaign declined to comment on the record for this story.

Warren, who was the first major candidate out of the gate in the 2020 Democratic presidential primary, has largely avoided criticism by other contenders and heightened scrutiny in the media — until now.

She has gained slowly and steadily in the polls and now, alongside former Vice President Joe Biden and Sen. Bernie Sanders, is considered one of the frontrunners in the race. In fact, she has almost eclipsed Biden in a RealClearPolitics average of national polls.

As Warren cements her status as one of the leaders of the pack, she’s all but guaranteed to face more pressure as a candidate and have more reporters — and opposition researchers — looking into her past. This pregnancy story drama bubbled up most among conservatives and progressive Sanders supporters online.

This isn’t the first time Warren has faced scrutiny over her telling of her personal story. Early on in her presidential bid, Warren came under fire for claims of Native American heritage and releasing DNA results to try to demonstrate the veracity of those claims. (The results showed that she probably had some Native American ancestry, but a small amount.) There is also evidence Warren claimed American Indian heritage on official forms earlier in her career.

Whatever the details of Warren’s pregnancy and teaching job, the scenario highlights a much broader issue: pregnancy and gender discrimination and the way people with families, especially women, are treated in the workplace.

The Pregnancy Discrimination Act, a federal law that bars discrimination on the basis of pregnancy, wasn’t passed until 1978, seven years after Warren says she was let go. Despite it, pregnancy discrimination remains a problem. The New York Times earlier this year published a lengthy feature on its persistence in American culture. It found that companies still “systematically sideline pregnant women” in a number of ways:

In physically demanding jobs — where an increasing number of women unload ships, patrol streets and hoist boxes — the discrimination can be blatant. Pregnant women risk losing their jobs when they ask to carry water bottles or take rest breaks.

In corporate office towers, the discrimination tends to be more subtle. Pregnant women and mothers are often perceived as less committed, steered away from prestigious assignments, excluded from client meetings and slighted at bonus season.

In light of the controversy surrounding Warren, many women have taken to Twitter to discuss their experiences with pregnancy discrimination, gender discrimination, and having families in the workplace.

If you have trouble believing that Elizabeth Warren experienced pregnancy discrimination because no one wrote down “Fired because pregnant,” you are going to be floored when you learn about the experiences of…. any other human woman you know.

Apparently a lot of men are just learning that pregnancy discrimination existed way back when Liz Warren was a teacher.

Just wait ‘til they hear it still exists.

This happened to me, in 2016, when I was four and a half months (and very openly) pregnant. If you don’t believe it could happen to a first-time teacher in 1971, 7 years before the Pregnancy Discrimination Act, then I have a bridge to sell you. https://t.co/a3sSl1UZmQ

Climate activist Greta Thunberg used her superpower of shaming adults on Senate Democrats
Join an all-star panel of critics to talk Princess Bride at the next Vox Book Club live event
Vox Sentences: Barr-schach test
During the worst summer of our lives, I didn’t have internet. It was the best.
Trump allies will keep investigating the Bidens — both officially and unofficially
Facebook’s independent Oversight Board is finally up and running