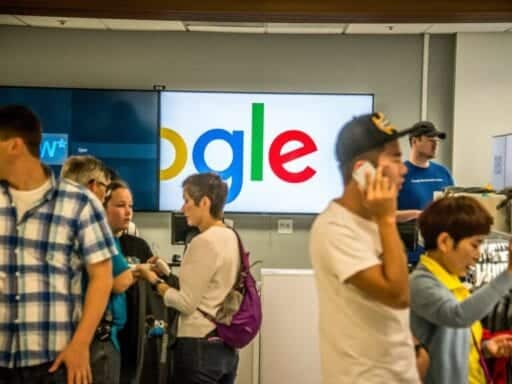 Google employees are angry that the company is making a censored search engine. They can shut it down.

Google is experiencing a “moral and ethical” crisis. That’s the view of hundreds of employees at the tech company, who are protesting the development of a censored search engine for internet users in China.

About 1,400 Google employees — out of the more than 88,000 — signed a letter to company executives this week, seeking more details and transparency about the project and demanding employee input in decisions about what kind of work Google takes on. They also expressed concern that the company is violating its own ethical principles.

“Currently we do not have the information required to make ethically-informed decisions about our work, our projects, and our employment,” they wrote in the letter, obtained by the Intercept and the New York Times.

The existence of the censored search tool — dubbed Dragonfly — was revealed earlier this month by the Intercept, sparking outcry within the company’s ranks and drawing harsh criticism from human rights groups across the world. Internal documents leaked to journalists described how the app-based search platform could block internet users in China from seeing web pages that discuss human rights, peaceful protests, democracy and other topics blacklisted by China’s authoritarian government.

Only a small group of Google engineers are reportedly developing the platform for Beijing, and information about the project has been so heavily guarded that only a few hundred Google employees even knew about it. Google has declined to comment publicly on Dragonfly, but Google CEO Sundar Pichai defended the project Thursday during a weekly staff meeting, saying that the project for China is merely in the “exploratory” stage.

The internal backlash among employees represents mounting concerns about whether Google has “lost its moral compass” in the corporate pursuit to enrich shareholders. But it also suggests that the people who make Google’s technology have more power in shaping corporate decisions than even shareholders have. In April, thousands of Google employees protested the company’s military contract with the Pentagon — known as project Maven — which developed technology to analyze drone video footage that could potentially identify human targets.

About a dozen engineers ended up resigning over what they viewed as an unethical use of artificial intelligence, prompting Google to let the contract expire in June, and leading executives to promise that they would never use AI technology to harm others.

The fact that Google employees succeeded in forcing one of the most powerful companies in the world to put ethics before shareholder value is a remarkable feat in corporate America, and signals why workers need an official voice in strategic decisions. Whether or not Google ultimately drops its plan to help China censor information will be a test of how far that power extends.

Doing business in China is good for shareholders, bad for humanity

It’s no mystery why Google executives want to do business with Chinese government officials: It’s profitable. With its population at 1.3 billion, China has the largest number of internet users in the world, so breaking into the Chinese market has been a long-time goal for Silicon Valley tech giants in their quest to find new users and to grow profits.

But working in China inevitably raises ethical issues for any US company. Doing business in mainland China means making deals with an authoritarian government that has a record of human rights abuses and a strict suppression of speech.

Despite this, Silicon Valley tech companies have shown a willingness to put aside their idealism — or rationalize their decisions to court Beijing. LinkedIn, for example, has a presence in China because it agreed to block certain online content.

Facebook is still banned in China, but chief executive Mark Zuckerberg has been trying to change that. In 2016, news surfaced that Facebook was building a censorship tool similar to Google’s Dragonfly project: It would allow a third-party to block certain Facebook posts in China in exchange for the government’s permission to operate the social media network there. A backlash similar to the Dragonfly controversy ensued, raising concerns about the potential for government officials to use the platform to spy on dissidents and punish them. These concerns led several Facebook employees who worked on the project to resign. That project was in early stages, too, and there’s no evidence that Facebook ever presented the tool to Chinese officials.

But Google’s decision to enter the Chinese market is more unnerving, for several reasons. It’s a striking reversal of the strong stance the company took back in 2010, when it decided to leave China in protest of Chinese government hacking and its crackdown on free speech. The decision also seems at odds with Google’s once-prominent motto “Don’t be evil” and it clashes with the principles the company adopted in June after the Pentagon contract controversy, in which Pichai promised that the company would not to use artificial intelligence to develop technology “whose purpose contravenes widely accepted principles of international law and human rights.”

Google employees say these kinds of promises are no longer enough, in light of the news about the censorship tool, and they are demanding a more formal role in decisions about the ethical implications of their work.

For the past few decades, rank-and-file workers have had no real influence in how public companies invest profits or make decisions about new revenue streams.

Modern American capitalism has been driven by a singular mission: to bring value to the people who own company stock. Vox’s Matt Yglesias explains how this mentality leads executives to pursue profit above other worthwhile goals.

Therefore, for executives to set aside shareholder profits in pursuit of some other goal like environmental protection, racial justice, community stability, or simple common decency would be a form of theft. If reformulating your product to be more addictive or less healthy increases sales, then it’s not only permissible but actually required to do so. If closing a profitable plant and outsourcing the work to a low-wage country could make your company even more profitable, then it’s the right thing to do.

While its true that CEOs are required by law to prioritize value to shareholders, that doesn’t necessarily mean they are required to make decisions guided only by what maximizes profits. The Supreme Court made this clear in its 2014 opinion in Burwell v. Hobby Lobby.

“Modern corporate law does not require for-profit corporations to pursue profit at the expense of everything else, and many do not,” the justices wrote in their opinion.

Momentum is starting to build to change this dynamic, by giving employees and consumers more power in C-suite discussions. Just this week, Sen. Elizabeth Warren (D- Massachusetts) introduced a bill that would require large public companies to make decisions not only based on how it would affect shareholders, but also on how it would affect consumers, employees and the communities where the company operates. The bill, titled the Accountable Capitalism Act, would also require corporations to allow employees to elect 40 percent of a company’s board of directors.

The idea behind the bill is to make sure that US corporations are decent citizens. That seems to be the same idea motivating Google employees to make more demands from their employer, which happens to be one of the most powerful companies in the world.

The response of Google employees to the company’s Dragonfly project for China gives us a glimpse of what might happen if workers had a more formal role in corporate decision making.

So far, Google executives haven’t said publicly whether or not they will go along. Based on reports describing Thursday’s staff meeting at the company’s California headquarters, the conversation about Dragonfly didn’t get that far. But if Pichai and other executives do go along with the demands, it would certainly reflect a major shift in corporate priorities. And it would show why workers have more power than shareholders: Employees are the ones who literally create value for shareholders, so they need to be on board with what they are creating.

Brandon Downey, a former Google engineer who says he regrets his role in helping develop the company’s first censorship tool in China (before the company backed out of the Chinese market in 2010), wrote a moving essay about what’s at stake:

Google is acting like a traditional company; one that squeezes every dime out of the marketplace, heedless of intangibles like principle, ethical cost, and even at the risk of the safety of its users…If technology is a tool, then it means the people making that tool have a responsibility to curb their tool’s misuse by playing a role in the decisions on how it gets used. And if the people who are the leaders of the company don’t believe this, they should hear it in plainer and clearer terms: namely, you do not become one of the largest companies in the history of capitalism without the assistance of the workers making those tools.

5 great movies from TIFF that flew under the radar
Who will win the Oscar for Best Picture? Here are the films with the best shot.
Kamala Harris has been criticized for her criminal justice record. She’s just begun to offer a respo...
2 winners and 3 losers from the LGBTQ presidential forum
Hilaria Baldwin’s Spanish accent and suspect origin story, explained
Everything you need to know about Palantir, the secretive company coming for all your data