The empty dream that LuLaRoe sold 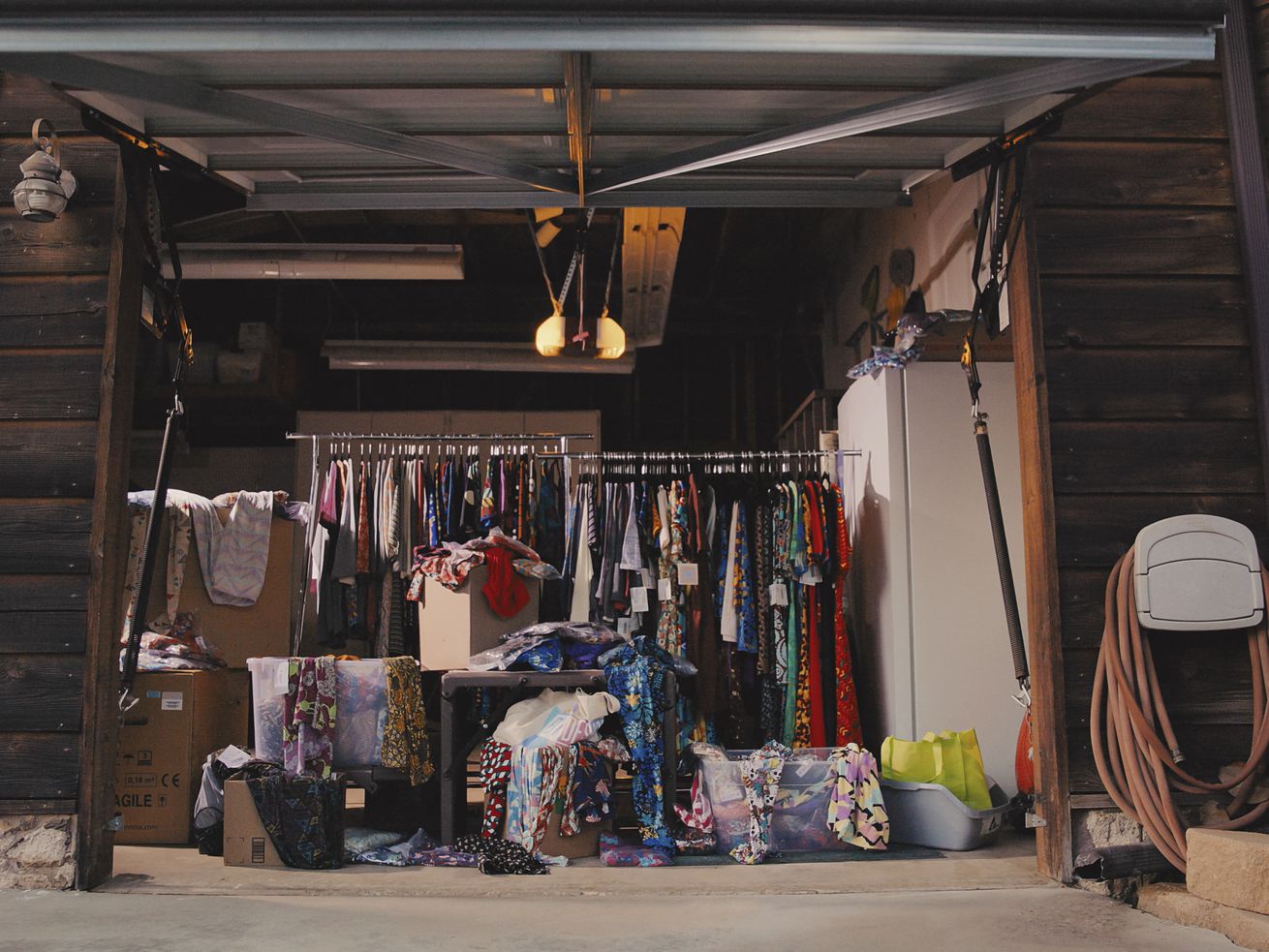 The women selling leggings on Facebook were the real prey, as the new Amazon series LuLaRich shows.

If you’ve never heard of LuLaRoe, the multilevel marketing company best known for its stretchy, often garishly patterned clothing and multiple ongoing lawsuits, then you’re probably not on Facebook. Still, the bold mission statement that appears on its homepage pretty much says it all.

“We believe everyone is beautiful, unique, and powerful; and that through these attributes, one can live with purpose and gratitude,” it reads, underneath a picture of seven smiling, 30-something-ish women dressed in clothing far more muted in tone than some of the company’s most infamous offerings. “These beliefs are why LuLaRoe was created; they bind us together like threads, sewing us into a community of lasting love and fellowship.”

Empowerment. Gratitude. Purpose. Sisterhood. More than leggings or stretchy dresses, LuLaRoe sells a vision of femininity, independence, friendship, and a happier life, in language that verges on the religious. Like other multilevel marketing companies (MLMs), LuLaRoe earns its revenue by selling its stock to individuals, who in turn sell it to others. Those individual sellers earn money through sales and by signing up more sellers “beneath” them in a “downline,” a percentage of whose sales they receive as well.

Like many MLMs, LuLaRoe touts unlimited opportunity. But that has a shadow side: If the opportunity to earn money through their company has no limit, then any barriers you hit must be your own fault.

What LuLaRoe is selling, however, is more than just financial opportunity — it’s a whole image. And so this shadow side applies to more than just earning potential. LuLaRich, the new four-part documentary about the company’s rise and unraveling, digs into that darker dynamic and what it reveals about a certain sort of American feminine ideal.

Directed by Jenner Furst and Julia Willoughby Nason, LuLaRich looks and feels similar to their 2019 film Fyre Fraud, along with other movies about famously scammy enterprises, such as this year’s WeWork: Or the Making and Breaking of a $47 Billion Unicorn and the 2019 Theranos documentary The Inventor. After a brief, eye-popping montage that sets up the story (in this case, involving women talking about stinky leggings and clips of creepy talks at conferences), things start off on a high note, mixing footage from brightly lit interviews with LuLaRoe founders DeAnne and Mark Stidham, former LuLaRoe retailers, and reporters who’ve written about the company with peppy archival clips from its marketing and communications.

The picture that’s painted, at first, is one of American innovation and success. DeAnne, the 10th of 11 children born to Mormon parents (with the improbable last name Startup) who campaigned against the equal rights amendment, tells her tale. She started LuLaRoe in 2012 as a single mom who made a maxi skirt for her daughter, and grew the company to enormous heights with the help of her husband, Mark. At its 2016 apex, LuLaRoe reported nearly $2 billion in sales and counted nearly 80,000 people, mostly women, among its “independent retailers.”

In the beginning, it cost $5,000 to join LuLaRoe, and though the price has dropped (the current buy-in is $499), tens of thousands of people invested many thousands to start as sellers. LuLaRoe doesn’t sell directly to consumers; instead, after sending in their money, new sellers receive an initial shipment of clothing (ranging from dresses and tops to the famous “buttery soft” leggings), then sell them to friends, family, acquaintances, and, in the case of LuLaRoe, Facebook followers via Facebook Live “parties.” If you sign up sellers (the “downline”), then you receive a cut of their earnings. Some early sellers found themselves earning tens of thousands of dollars monthly as they grew their downline.

By the second episode, the exploitative nature of the business model becomes clear, powered by the rise of social media. Those who joined the company early made a lot of money, but the potential to earn diminished for later adopters. Potential LuLaRoe retailers were told they shouldn’t go into debt to join the company, for instance, but several people interviewed in the series cite advice to sell breast milk to NICUs so they can afford to increase their inventory of LuLaRoe’s products.

The Stidhams’ interview footage — it’s shocking, to be honest, that they agreed to be in the series at all — is juxtaposed with clips that cast doubt on the rosy story they’re telling the filmmakers. Those clips include selections from their copious video addresses to LuLaRoe’s sellers, as well as deposition footage from the state of Washington’s 2019 pyramid scheme lawsuit against the company. (In February 2021, LuLaRoe settled that lawsuit for $4.75 million.)

The third episode delves into some of the creepiest aspects of the company, from its founders’ pressure on its top sellers to undergo drastic weight loss surgery to the company’s cult-like leanings. Attendees at LuLaRoe conventions and cruises, where Mark Stidham would quote the Book of Mormon and compare himself to the Latter-Day Saints founder Joseph Smith, were exhorted to “retire their husband” (that is, make enough money to let their husbands quit their jobs), but with an underlying assumption that, as one woman puts it, women would “be empowered at first, and then the husband was supposed to take over and the roles were supposed to be changed.”

The goal, ultimately, was to have a family business modeled on a particular vision of the family, with a man in charge and a woman helping him. Some interviewees note the celebrity worship of the Stidhams and the eerie sameness of the LuLaRoe sellers — everyone dressed alike, with softly curled blonde hair, and “all obsessed with the [clothing] prints,” as one woman puts it.

Then there was the deluge of moldy, defective inventory that sellers began receiving, sometimes with huge holes or bizarre prints (which could make it look like the wearer had an erection or emphasized genitalia). When sellers complained to the company, they found themselves with little recourse; instead, the Stidhams and other leadership more or less gaslit them about “escaping the victim mindset.” Encouraged to quit “whining,” via video and conference talks, the sellers were told over and over that everything was fine and that they were only hampered by their willing submission to the “drama triangle.”

The final episode chronicles the fallout — a mass exodus of disgruntled sellers and a cascade of lawsuits. But it didn’t lead to a complete collapse. LuLaRoe still very much exists, albeit with updated guidelines and restrictions that are supposed to keep the company out of legal hot water.

Its base has shrunk drastically, however, and all but one of the former independent retailers interviewed in the film have since left the company. Tearfully, they each explain that while they made money with LuLaRoe in the beginning, many found themselves thousands of dollars in debt, with broken marriages and families. “Working for LuLaRoe absolutely destroyed my life,” one woman says.

She means more than just her finances, though of course that’s a big part of it as well. She really means her life. It wasn’t just that LuLaRoe preached wealth; it pitched to potential distributors a very specific ideal of beauty and domesticity — a big and peaceful home, a wealthy and happy husband, nice vacations, a certain kind of personal appearance deeply tied to a particular vision of the stay-at-home mom (who represents an “underutilized resource,” according to Mark Stidham). To put it more bluntly: It’s “a white girl business,” says former LuLaRoe employee-turned-seller Jill Drehmer, who is Black.

LuLaRoe’s entire sales pitch to women was that they could be successful stay-at-home moms with the world by the tail, girlbosses but with a conservative twist. If they joined the company (which is to say, if they paid LuLaRoe for merchandise), then the assumption was that they’d bought into that vision.

So if they failed at that vision — failed to earn enough, hit a rough patch in their marriage, didn’t have the right house or hairstyle or body shape — then it was a personal weakness. It was a reflection of bad character. In the LuLaRoe universe, that weakness meant you were adopting a “victim mentality,” refusing to take responsibility for your decisions. If you weren’t thriving, the only answer was that you were making excuses.

It wasn’t the business model or pay structure or product that was wrong. It was you.

That’s common language for multilevel marketing companies, which rely on guilting underlings into selling more in order to benefit those higher up the chain. But it’s also what makes LuLaRoe’s gaslighting of its sellers — which the Stidham interviews reveal is still, to an extent, ongoing — especially galling. Women pulled smelly or defective inventory from boxes and, when they complained or tried to exchange it, were told the problem was theirs. The company was, in essence, banking on its sellers — whom it constantly told how empowered they were — being unable to accept the truth in front of their faces.

LuLaRich points out that the angry sellers instead used the same platforms that they’d used to sell products (Facebook groups, in particular) to band together and confirm that no, they weren’t crazy; the inventory really was messed up, and the company really was lying to them. They were able to fight back because the same networks of friendship and “sisterhood” that the company sold as unique to LuLaRoe could also be used to revolt.

What the sellers still lost was incredible — time, money, friendships, and, for some, their entire sense of independence and selfhood. That’s what LuLaRich so keenly illustrates: In the game of MLMs, it’s still the ones at the top who win. The Stidhams are still living a comfortable, even extravagant lifestyle; some of their closest former “business associates” are left holding the bag. It’s not beauty, power, uniqueness, gratitude, and purpose they’re selling. Instead, they’ve preyed on the insecurities, uncertainties, and disadvantages of the women they target.

Mixing go-girl empowerment with rank misogyny is hardly new. LuLaRoe wasn’t the first to do it, and will hardly be the last. But as LuLaRich shows, the identity LuLaRoe sold to its closest devotees was an empty dream — wrapped in garishly patterned fabric, stretchy, comfy, and always buttery-soft.

All four episodes of LuLaRich premiere on Amazon Prime on September 10.

What we know about the Uvalde elementary school shooting