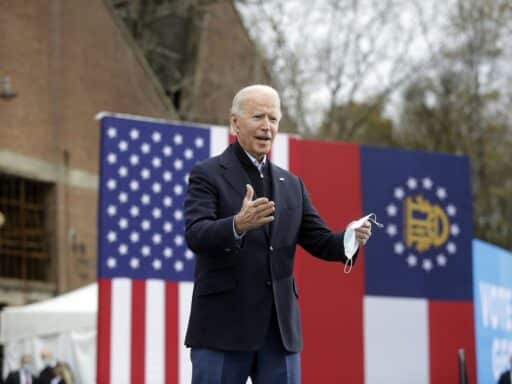 The fate of President-elect Joe Biden’s legislative agenda hinges on the outcome of two US Senate races in Georgia on January 5.

The Georgia races are critical because they will determine whether Democrats will take control of the Senate — and therefore, political power in Washington, DC. With Biden headed to the White House and House Speaker Nancy Pelosi still in control of the US House, Democrats will control the executive branch and at least half of the legislative branch once Biden takes office later this month.

Winning both Georgia seats would give Democrats unified control of the executive and legislative branches, albeit with very slim majorities. But even if Democrats surpass expectations and manage to pull out two wins in Tuesday’s Senate runoffs, their ability to pass legislation through Congress will be severely hampered from the get-go. The two Georgia seats would grant them only 50 seats in the Senate, plus Vice President-elect Kamala Harris serving as a crucial tie-breaker for simple majority votes.

No matter who wins on Tuesday, Democrats will have to contend with Senate Republicans, most notably Senate Majority Leader Mitch McConnell (R-KY), a perennial thorn in the side of Democratic policy. Most bills need to clear a 60-vote supermajority in the Senate. Therefore, even if Democrats have control of the Senate, they still need around 10 Republican votes to get much done.

Passing Democratic bills will be extremely difficult in a 50-50 Senate. It will be tough to even pass broad bipartisan bills. But winning Georgia’s seats is the only thing that guarantees that Democrats — rather than McConnell — will have a say on which bills come to the Senate floor for debate. It would also give them the ability to more easily confirm Biden’s Cabinet picks, or his nominees to the federal judiciary and US Supreme Court.

“It’s fundamentally a different situation than 2009 where we had 59 Democratic senators,” Phil Schiliro, who served as President Barack Obama’s legislative director, told Vox. Schiliro remembered the Obama White House had a difficult enough time trying to peel off a few Republican senators here and there to cross the filibuster-proof 60-vote majority.

“If Republicans are in control, it’s not a matter of finding one, two, three, four senators,” to side with Democrats, Schiliro said. It’s more a matter of whether McConnell lets Biden’s desired bills see the light of day.

Without the Senate, Biden’s chance of passing bills decrease

Much like Obama after his 2008 election, Biden is coming into office during a time of crisis that will require a swift continued response from his administration and Congress.

Even with the first vaccines being administered in the United States, the Covid-19 pandemic is still regularly hitting deadly new peaks of over 200,000 cases per day. Top public health officials including Dr. Anthony Fauci have warned of a post-Christmas holiday “surge upon a surge” of additional Covid cases expected.

Biden’s immediate top priorities coming into office are curbing the pandemic and reinvigorating a stagnant economy, likely through a green infrastructure package. He needs buy-in from Congress to do both. Biden can do some things on his own, like signing executive orders, or instructing his federal agencies to reinstate Obama-era regulations on issues ranging from civil rights to protecting the environment.

Working with a split Congress could prove far more difficult. After months of prolonged deadlock between the Republican-controlled Senate and Democratic-controlled House, Congress recently passed a bipartisan $900 billion bill containing additional stimulus checks, unemployment benefits, and food and rental assistance for needy families. Biden and Democratic leaders have been clear they want to do more, but any additional assistance could well hinge on McConnell.

“We cannot do this alone,” Biden said in a statement after Congress passed the latest relief bill. “Immediately, starting in the new year, Congress will need to get to work on support for our COVID-19 plan, for support to struggling families, and investments in jobs and economic recovery. There will be no time to waste.”

Even if McConnell finds himself Senate Minority Leader for the next two years, the Senate filibuster means he will have plenty of power to obstruct Democratic priorities. Moderate Democrats like Sen. Joe Manchin (D-WV) have unequivocally said they don’t want to take the step of blowing up the Senate filibuster and allowing bills to pass via a simple majority rather than the 60-vote threshold.

“That would break the Senate,” Manchin told the New York Times’s Luke Broadwater recently. “If you basically do away with the filibuster altogether for legislation, you won’t have the Senate. You’re a glorified House. And I will not do that.”

There are still things Democrats can do if they control the Senate with a bare majority. They could potentially use the Congressional Review Act to help Biden repeal some of Trump’s rulemaking. They could confirm Biden’s Cabinet appointments and judicial nominees. And they may be able to work around the filibuster in budget bills.

A former senator for decades before becoming Obama’s vice president, Biden has a long working relationship with McConnell in the Senate. This could prove to be an asset going into his presidency.

“President-elect Biden, one of his strengths is reaching out and finding common ground,” Schiliro said, adding Biden and McConnell “have a shared experience and history in the Senate; they have a shared respect for the Senate, and I think that’s helpful.”

But unless McConnell and Republicans have a change of heart and decide to work with Democrats on even the most bipartisan issues like Covid-19 relief and infrastructure, the next two years could be defined by more partisan gridlock.

The results of the Georgia election could well determine how severe that gridlock is.

“A Juneteenth like no other”: Juneteenth celebrations take on a special meaning this year
Trump’s confusing back-and-forth on fiscal stimulus, sort of explained
One Good Thing: The dark pop pleasures of Selena Gomez’s Rare
Airborne coronavirus transmission, explained
Social distancing can’t last forever. Here’s what should come next.
“Definitely not”: Iran’s foreign ministry rejects the possibility of a meeting with Trump