The EPA’s bizarre justification for rolling back fuel efficiency standards 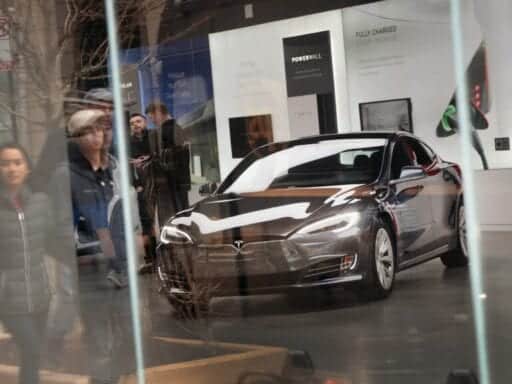 The agency claims it will save lives by making safe cars more affordable. In fact, the proposal will lead to more pollution.

The Environmental Protection Agency is starting to roll back one of the most important policies for limiting climate change of the Obama era. The agency is also picking a fight with states that want tougher car emission rules, setting itself up for a knock-down, drag-out legal fight.

The proposal, released Thursday morning by the EPA and the US Department of Transportation, would ramp up fuel economy standards for cars and light-duty trucks until 2021 and then freeze them. The change would also revoke California’s waiver to set its own rules under the Clean Air Act, rules that 13 other states and the District of Columbia also follow.

California is already swinging back:

California will fight this stupidity in every conceivable way possible: https://t.co/OWqbFIUmUl https://t.co/qrH7gSaWDn

The transportation sector is now the largest greenhouse gas emitter in the United States, so going further with less fossil fuels would reduce the country’s impact on the global climate. Vehicles are also the largest source of air pollution, so reducing what comes out of tailpipes would save lives.

The Obama-era standards would avert 570 million metric tons of greenhouse gas emissions by 2030, equivalent to stopping 140 typical coal-fired power plants for a year, the Union of Concerned Scientists has estimated.

They’d save consumers money too. According to Margo Oge, former head of the EPA’s Office of Transportation and Air Quality, the fuel savings alone through 2025 would add up to $1.7 trillion.

However, the Trump administration has argued that the prior standards would cost society $500 billion over the next 50 years. “More realistic standards can save lives while continuing to improve the environment,” said EPA Acting Administrator Andrew Wheeler in a statement.

Vox’s David Roberts has written about the environmental consequences the new regulations could have if they go into effect, but it’s also worth examining the strange reason the EPA said it’s doing this — safety — and how it will affect the auto industry.

In particular, the changes would let companies like Chrysler and GM, which rank the lowest in average fuel economy, breathe easier. They also cut a crucial revenue stream for carmakers like Honda that already beat the current standards and manufacturers like Tesla, which only makes zero-emission electric vehicles.

That means the weaker regulations will simultaneously help the dirtiest, hurt the cleanest, and derail years of tenuous progress in reducing environmental harm from a massive and growing source of pollution.

The EPA is justifying the fuel economy rollback by invoking safety

New cars are expensive. New cars with more features are even more expensive. Safety is a feature. So is fuel economy. But raising fuel economy standards raises the retail prices of cars. That means people with older deathtrap cars will be less inclined to upgrade to newer, safer cars.

Therefore, according to the EPA’s peculiar logic, raising fuel economy standards will kill motorists. Lowering them will save lives.

“[The new fuel efficiency proposal] is anticipated to prevent thousands of on-road fatalities and injuries as compared to the standards set forth in the 2012 final rule,” the EPA wrote in a press release about the announcement. The EPA said the proposed changes would save 1,000 lives per year.

I asked the EPA for clarification on these points and they referred me back to their press release.

Here’s the problem, though:

Yes, newer cars are safer. But efficiency has been advancing in tandem with safety and average fuel economy reached a record high this year. Americans are driving farther than ever, but the fatality rate has fallen drastically over the past four decades:

The EPA said the Obama rules would add an additional $2,340 to the overall ownership costs of a new vehicle. Given that the annual cost to own a car is around $8,000, an additional $468 per year over five years for a more efficient car or truck isn’t a dealbreaker for most buyers.

On the other hand, air pollution from vehicles is responsible for 30,000 premature deaths. So it stands to reason that the lives saved by improving efficiency and reducing air pollution outweigh the lives saved by potential car buyers on the margins upgrading to safer cars. Also, one of the biggest reasons new cars became so safe is because of sweeping federal regulations, so if saving lives is the goal, this is the better way to do it.

“At first glance, this proposal completely misrepresents costs and savings. It also relies on bizarre assumptions about consumer behavior to make its case on safety,” said California Air Resources Board Chair Mary D. Nichols in a statement. “CARB will examine all 978 pages of fine print to figure out how the Administration can possibly justify its absurd conclusion that weakening standards to allow dirtier, less efficient vehicles will actually save lives and money.”

It’s important to remember why the Obama administration imposed these rules in the first place. Here’s some brief history: After the 2008 financial crash and the ensuing economic crisis, Chrysler and General Motors were on the ropes and came to Congress with their hands out looking for a bailout. They received cheap loans and financial assistance under Presidents Bush and Obama totaling almost $80 billion, with a net cost to taxpayers of $9.3 billion.

A big reason US car companies were foundering was that gas prices suddenly shot up and US automakers, who for years were making bigger, thirstier cars, were suddenly facing a cash-crunched, fuel-abstemious market.

So the Obama administration told US car companies they needed to reduce their greenhouse gas emissions and improve their efficiency to better compete with foreign automakers, marking the biggest increase in fuel economy regulations in 30 years.

This manifested as a combination of rules across the EPA, the National Highway Transportation Safety Administration, and the California Air Resources Board finalized in 2012.

The key target was that automakers would have to reduce their average greenhouse gas emissions from the passenger cars and light trucks they sell to 163 grams per mile by 2025. A subtle point here is the EPA estimated meeting this goal with just fuel efficiency improvements means car companies would have to achieve an average economy of 54.5 miles per gallon across their offerings, assuming more cars than trucks are sold. That doesn’t mean that 54.5 mpg is the actual benchmark for all car companies.

Sam Ori, executive director of the Energy Policy Institute at the University of Chicago, explained that the fuel economy standard was designed to adapt to consumer behavior. It’s measured based on the vehicle’s footprint, so larger cars and trucks have to meet less stringent targets.

So if people buy more SUVs, a car company is allowed to have a lower average fuel economy. On the other hand, this can push carmakers to build larger and larger vehicles (witness the growth of crossover SUVs).

A car company can also reduce its greenhouse gas emissions with tactics like limiting coolant leaks and by buying credits. Based on current trends and projections, the EPA estimates that the current rules will require a real-world average fuel economy of 36 miles per gallon by 2025, up from 24.7 miles per gallon in 2016.

The Obama administration reported in January 2017, shortly before Trump took office, that everything was hunky-dory. Ousted EPA Administrator Scott Pruitt said it wasn’t.

“The Obama Administration’s determination was wrong,” the EPA administrator said in a press release. “Obama’s EPA cut the Midterm Evaluation process short with politically charged expediency, made assumptions about the standards that didn’t comport with reality, and set the standards too high.”

But the document the EPA links to as background for the rollback announcement reports that the ruling from former EPA Administrator Gina McCarthy was “based on an extensive technical record, created over 8 years of research, review of several hundred published reports, hundreds of stakeholder meetings, and multiple opportunities for the public to provide input.”

Ori said the new proposal is thin on its technical justifications. “It does not rise to the level of what the Obama administration did to put these rules into place,” he said.

Now the EPA is on a collision course with California and the 13 states that want stricter rules. The EPA said it wants a harmonized national fuel economy standard rather than a patchwork and said California’s benchmarks are “technologically infeasible.”

“The Trump Administration has launched a brazen attack, no matter how it is cloaked, on our nation’s Clean Car Standards,” wrote California Attorney General Xavier Becerra in a statement. “The California Department of Justice will use every legal tool at its disposal to defend today’s national standards and reaffirm the facts and science behind them.”

Here’s how this hurts Tesla

Since Tesla only makes electric cars, it can sell a variety of state and federal credits to other automakers who are having a harder time meeting the Obama-era goals. They come in three mutually exclusive categories: zero-emissions vehicle credits, greenhouse gas emissions credits, and fuel economy credits.

“They can leverage the same car in multiple categories,” said Benjamin Leard, a research fellow at Resources for the Future.

Other carmakers like Honda and Toyota also sell credits since they are beating the current standards.

According to Tesla’s latest 10-K filing with the Securities and Exchange Commission, the company has seen more and more money coming in from selling these credits. “Revenue from the sale of regulatory credits totaled $360.3 million, $302.3 million and $168.7 million for the years ended December 31, 2017, 2016 and 2015, respectively,” according to the filing.

The expectation was that as emissions limits ratchet down, conventional car companies would have to spend more on credits to comply with the rules or invest in cleaning up their cars. But with the emissions and fuel economy standards holding steady, the demand for new credits would shrink.

“I would certainly expect the prices of those credits to go down” with the rollback of the standards, Leard said.

Model 3 now outsells all other premium mid-sized sedans in the US…..combined pic.twitter.com/FhjKUGK58N

After a wave of bad press, Tesla founder Elon Musk was contrite on an earnings call this week and the company’s stock price rose 14.6 percent on Thursday.

Others in the auto industry are also not enthusiastic about the fuel economy rollback.

“While we have said that re-opening the midterm review was the right thing to do, the Alliance has long said that we support year-over-year increases in fuel economy,” Wade Newton, a spokesperson for the Alliance of Automobile Manufacturers, said in an email.

The EPA’s fuel economy proposal will now be open to a 60-day review and the agency is taking public comments. The EPA and NHTSA will also hold three public hearings on the revisions. Dates have not been announced yet.

2020 Democrats criticize Trump’s record on race at NAACP convention
Manafort’s defense team goes all out to try to discredit Rick Gates’s testimony
The 4 main conservative defenses for Trump against impeachment, explained
At the U.N., Trump showed his total unfitness for U.S. presidency
Foreign policy was a loser in the Democratic debates
Tulsi Gabbard just won a delegate. Will she be in the next debate?