The Equalizer 2: Denzel Washington as a superhero should be more fun 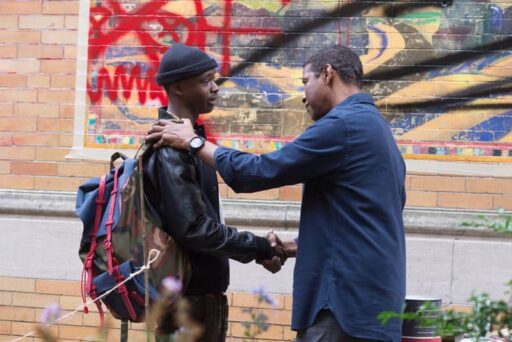 The grand finale of the first Equalizer movie is one of the most sublimely silly sequences I’ve ever seen. Denzel Washington, starring as retired CIA black ops operative Robert McCall (though his character’s name is about as important as Liam Neeson’s in Taken, which, to wit, I have forgotten), destroys a crew of gun-toting Russian mobsters in the Home Depot knockoff “Home Mart,” taking them down one by one with all manner of home improvement tools. The fight is capped off by the familiar “duel in the rain” sequence that features in so many action movies, except this one is improbably, delightfully staged inside the Home Mart warehouse.

The Equalizer 2, which pairs Washington with director Antoine Fuqua once again, doesn’t quite reach those same heights. The setup is mostly the same, as McCall works a relatively mundane job during the day (this time he’s a Lyft driver) and then moonlights using his secret fighting skills to dispatch those who would threaten his friends and community. He’s never referred to as “the Equalizer” by those around him, but he might as well be, given that he’s just a cape away from being a full-fledged superhero.

The movie is at its best when it embraces the slightly goofy nature of McCall’s vigilantism. It’s why the first Equalizer film worked: Though McCall ended up singlehandedly defeating the Russian mob, his reason for doing so was as simple as protecting a single person. But The Equalizer 2 expands its scope, with McCall’s preoccupation with caring for the folks in his apartment complex nearly superseded by a larger political conspiracy featuring players from his past life. The result — while still an entertaining film about Denzel Washington saving the day — is that The Equalizer 2 ultimately suffers from trying to do too much.

Broadly speaking, The Equalizer 2 isn’t any more or less ridiculous than its predecessor — one of the movie’s C-plots involves a painting lost in the Holocaust, and the finale takes place during a hurricane — but the political machinations that McCall gets mixed up in don’t quite mesh with the image of the friendly neighborhood superhero that was established during the first film, and persists in McCall’s interest in his neighbors and Lyft passengers. The sequel’s lean into a slightly more “serious” tone is also reflected in the way Fuqua has largely abandoned the Sherlock Holmes-ian gimmick of having McCall piece together scenes in slow motion before tearing his opponents apart.

To the franchise’s credit, its self-awareness of its ridiculous premise hasn’t completely disappeared, as the idea of McCall’s antics getting him anointed as a superhero is briefly touched on, and Washington ups the amount of dad humor. He’s still clad in the quintessential dad wardrobe (high-waisted pants and neutral-tone collared shirts), and he’s looser with his sense of humor, shooting finger guns at his enemies and, in one of the film’s funniest scenes, making sure a few unfortunate souls don’t ruin his Lyft rating. (Tangentially, I have to wonder what kind of sponsorship deal was struck for the company to appear in the film; fake search engines abound, why not fake ride-hailing services?)

The problem is that that humor doesn’t carry through the entire film. To a certain extent, it can’t, given the bloody nature of The Equalizer’s premise, but the first film managed to keep things a bit lighter by making the stakes inherently home-based (hence the Home Mart-set showdown) and ensuring that the “equalizing” going on was on behalf of the people around McCall, not McCall himself.

The Equalizer 2 shows glimmers of a similar grounding influence in McCall’s tentative friendship with a truant neighborhood kid, Miles (Moonlight’s Ashton Sanders), but there’s too much of a “this time, it’s personal” formula already in place for the film to avoid coming off as too self-serious. When one of McCall’s friends is murdered, setting him off on a quest for revenge, Miles starts to take a back seat, and the combination of lessened emotional stakes and an overly somber tone start to drain the fun out of the proceedings.

To that end, the finale this time around plays like a video game level instead of the end of a narrative arc, which isn’t necessarily a bad thing (Leigh Whannell’s Upgrade felt much the same, except as a button-masher rather than a multiplayer shooter). However, it serves as a useful reminder that such setups aren’t always engaging to watch if you’re not a player.

Though not as fun as the first film, The Equalizer 2 still gets by on its basic premise

Despite its shortcomings, The Equalizer 2 is, like its predecessor, still one of the better vigilante movies out there. (John Wick, with its near-magical realism when it comes to the world of assassins, is in its own category.) If there’s anything that movies like the recent remake of Death Wish have proved, it’s that stories about taking justice into your own hands can come perilously close to becoming pieces of demented gun propaganda.

It’s thanks to Sanders’s rapport with Washington that The Equalizer 2 doesn’t fall to that level. With Miles in the picture, the violence in the film becomes an active danger rather than something to revel in (most of the time, anyway), and though the surrogate son storyline may at times feel trite, it’s much needed. Robin Hood isn’t compelling because he steals for himself but because he steals for others, and so it goes with the Equalizer. We already know he can take care of himself. The whole point is that he levels the playing field for others.

Given the trouble the film takes to introduce the residents of McCall’s apartment complex, we seem to be primed for an Equalizer 3. This is a bit of a mixed blessing; the father-son relationship McCall has with Miles in The Equalizer 2 lends itself to the personal touch that made the first Equalizer great, but it’s debatable whether there are enough set pieces left that another film wouldn’t push the franchise into Punisher territory. The appeal of the Equalizer series is in watching the everyday — including Washington himself — turn deadly. And like its hero, The Equalizer 2 still has it where it counts.

“The scales of justice are imbalanced”: Sandra Bland’s sister speaks out in new op-ed
Trump echoes NRA talking points, showing that “background checks” talk was all a charade
What to expect during the House Judiciary Committee’s first impeachment hearing
Starbucks goes drive-thru only in response to coronavirus pandemic
Patti Smith’s new memoir is a dreamy recollection of a terrible year
Support for marijuana legalization is at an all-time high in a new poll