The escalating conflict between Bernie Sanders and Elizabeth Warren, explained 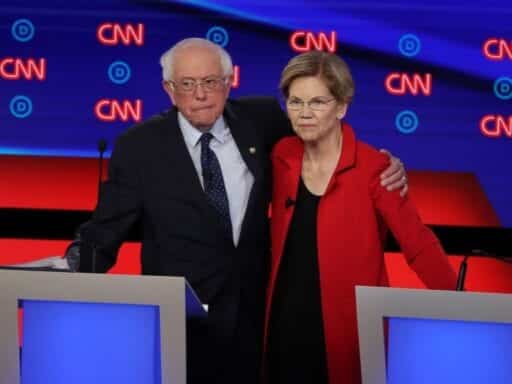 Sanders and Warren say they are friends. Now there are new tensions between them.

The genial relationship between 2020 progressives Sens. Elizabeth Warren and Bernie Sanders hit a rough patch this weekend, three weeks out from the Iowa caucuses — where they’re currently polling neck-and-neck.

On Saturday night, Politico reported that a Sanders campaign script reportedly given to volunteers was going negative on Warren. Warren and Sanders, US Senate colleagues who often say they consider each other friends, have so far declined to criticize each other on the trail — even when prodded by reporters.

The script Politico’s Alex Thompson and Holly Otterbein obtained said, “I like Elizabeth Warren. [optional]. In fact, she’s my second choice. But here’s my concern about her. The people who support her are highly-educated, more affluent people who are going to show up and vote Democratic no matter what. She’s bringing no new bases into the Democratic Party. We need to turn out disaffected working class voters if we’re going to beat Trump.”

While there are lingering questions as to how high up the chain of command the script came from, the Sanders campaign has not denied it’s real, and the leaked original reportedly read “Paid for by Bernie 2020” at the bottom. A Sanders campaign spokesman didn’t respond to Vox’s request for comment as of press time.

Still, there’s no doubt it has touched off a new, unexpected conflict between Sanders and Warren, just a couple days before a presidential debate and three weeks before the all-important Iowa caucuses.

“I was disappointed to hear that Bernie is sending his volunteers out to trash me,” Warren told reporters after a Sunday town hall in Iowa. “Bernie knows me, and has known me for a long time. He knows who I am, where I come from, what I have worked on and fought for, and the coalition and grassroots movement we’re trying to build.”

Also responding Sunday night, Sanders attempted to play down the tensions — and said he personally has never made any negative remarks about Warren.

“Look I just read about it. We have over 500 people on our campaign. People do certain things. I’m sure that in Elizabeth’s campaign, people do certain things as well,” Sanders told reporters in a rare press availability. “But you have heard me for months. I have never said a negative word about Elizabeth Warren who is a friend of mine. We have differences of issues, that’s what the campaign is about, but no one is going to be attacking Elizabeth.”

Warren’s campaign was soon fundraising off the Sanders script — pitching her as a candidate that could unite the Democratic Party in an email to supporters written by Warren campaign manager Roger Lau.

“This type of attack isn’t about disagreeing on issues — it’s about dismissing the potency of our grassroots movement,” Lau’s email read. “Let’s be clear: As a party, and as a country, we can’t afford to repeat the factionalism of the 2016 primary.”

And on Monday morning, CNN’s MJ Lee reported Sanders told Warren at a private 2018 meeting before both announced their presidential campaigns that he believed a woman couldn’t win in 2020, according to four sources. Sanders vehemently denied making the comment, telling CNN in a statement that it was “ludicrous,” and accused “staff who weren’t in the room” of “lying about what happened.”

As we move toward voting days in the early states, these reports could foreshadow a tenser primary race to come.

Sanders and Warren are personally friendly, but they are serious competitors

Sanders hasn’t been shy of overt criticism about more moderate frontrunners like former Vice President Joe Biden, but hasn’t personally gone after Warren. The 2018 meeting between the two was to forge a so-called “non-aggression pact,” where they agreed they would not directly go after each other on the campaign trail.

Indeed, part of the reason the script made waves was that while some top Sanders staffers jabbed at some of Warren’s policy proposals earlier in the campaign, they’d been fairly silent about her for months.

The change in rhetoric underscores the fact that there’s a real competition between the two campaigns in Iowa, where the latest Des Moines Register/CNN/Mediacomm Iowa poll showed Sanders in first place at 20 percent and Warren close behind in second at 17 percent. Moderates including former South Bend, Indiana, Mayor Pete Buttigieg and former Vice President Joe Biden are polling third and fourth, with Buttigieg at 16 percent and Biden at 15 percent.

And with the news that Sen. Cory Booker has dropped out of the 2020 race, Warren and Buttigieg’s numbers in the Iowa poll went up slightly to 18 and 17 percent, respectively, while Sanders and Biden’s stayed the same, according to Des Moines Register editor Rachel Stassen-Berger.

To underscore how fluid things are in Iowa, a Monday poll from Monmouth University found Biden in the lead at 24 percent, Sanders at 18 percent, Buttigieg at 17 percent, and Warren at 15 percent.

The Des Moines Register poll, conducted by veteran pollster J. Ann Selzer, found overlap in voters who are considering both Warren and Sanders; 44 percent of Sanders supports said Warren is their second-choice candidate, while 31 percent of Warren’s supporters said Sanders was their second choice.

It’s also worth noting that while more of Sanders’s supporters say Warren is their back-up choice, they’re still more loyal; 59 percent of his Iowa supporters said their mind is made up and 49 percent said they are “extremely” enthusiastic about their candidate. In comparison, 32 percent of Warren’s supporters said they were “extremely” enthusiastic, and 26 percent each said the same for Biden and former South Bend, Indiana, Mayor Pete Buttigieg.

“There was a thought that his support was a holdover from when he ran before and that that would evaporate,” Selzer told the Des Moines Register. “It certainly has not evaporated.”

Still, with the Iowa Poll showing 45 percent of likely caucusgoers saying they could be persuaded to change their minds and another 13 percent not yet settled on a first choice candidate, there’s room for the race to shift in the final three weeks.

In public arenas, like the presidential debates, Sanders and Warren have largely teamed up against Biden and Buttigieg’s push for moderation.

As Tara Golshan wrote last year for Vox, “the biggest divide in the primary is not between Warren and Sanders, but between the kind of economic and political world view currently being espoused by Biden, the leading candidate [nationally], and the progressive wing of the party.”

But as their polling tallies stay competitive, things could shift — and have, at times in the past.

In September, Sanders’s national press secretary Briahna Joy Gray, tweeted about the Warren campaign’s unionizing effort, which is still under contract negotiation. Under a Sanders presidency, she wrote, “Warren’s campaign would be subject to compulsory mediation for failure to reach a collective bargaining agreement. There is only one campaign that has put its money where its mouth is [with respect to] organized labor.”

In another tweet, Gray criticized Warren for not supporting a national rent control initiative.

“I don’t understand why anybody goes to all the trouble of running for president of the United States just to talk abt what we really can’t do and shouldn’t fight for.” – @ewarren

Bernie says yes to natl rent control bc we can, we should, & we must.

While Sanders’s team has long maintained that Biden is their primary target (something Sanders’s rhetoric would also suggest), his staff and supporters have also highlighted policy differences with Warren.

Warren and Sanders spent much of 2019 putting out big, bold plans for universal free college, a Green New Deal and Medicare-for-all, and as Warren surged in the fall, some of Sanders’s staff were not shy in characterizing their policies as being bolder. But a few months later, as Sanders collected endorsements from multiple progressive groups, the online jabs from some of his staff largely quieted.

While Sanders and Warren’s voter bases have their differences, there has always been overlap between their supporters in Iowa and New Hampshire. Whether drawing sharper contrasts will help boost either of them to a win over the other (or moderates Biden and Buttigieg) remains to be seen.

Vox Sentences: Redoing Brexit’s “only possible” deal
Why the death of a 7-year-old black girl became a national story about race and violence
Why the alt-right’s real power is in the narrative it sells
Manifesting, the latest New Age internet wellness craze, explained
About that fly in the vice presidential debate
Trump’s promotion of unproven drugs is cause for alarm, but not because he’s making money off it