The essential worker revolution of 2020 will not wait 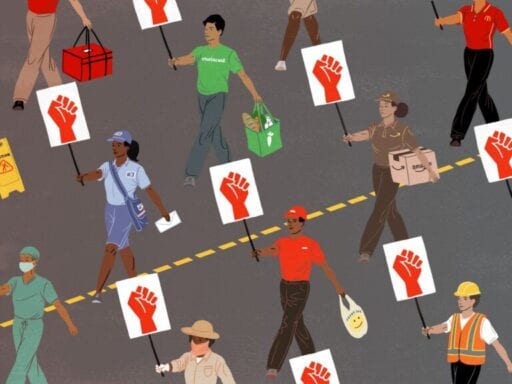 When clinging to America’s individualistic ideals in a pandemic means letting poor people die in service of the economy, society cannot hold.

Part of the Pandemic Issue of The Highlight, our home for ambitious stories that explain our world.

Human societies fall somewhere on a spectrum, with individualism on one end and collectivism on the other. The collectivist end could be summarized as, “We’re all in this together” — think propertyless Indigenous tribes that share everything — and the individualist end by Margaret Thatcher’s famous declaration that, “There’s no such thing as society; there are individual men and women, and there are families.” It could also be summarized as, “You’re on your own.”

American identity is deeply rooted in individualism and freedom, in Protestant settlers’ belief in a personal, one-on-one relationship with God and the American Revolution’s nominal ideals of a land where all men are created equal and the lowest-born can rise to the top by their own merit. Our heroes are rugged cowboys, Randian übermenchen, Horatio Alger boys pulling themselves up by their bootstraps, college dropouts starting up companies in garages, good guys with guns. They don’t need help. They’re self-reliant. Most of all, their heroics are solitary. They’re alone.

As the self-quarantined would be able to tell you, being completely on your own isn’t generally a good feeling. It’s bad enough when life is normal, but the pandemic is giving the non-wealthy a raw, undiluted taste of what “there is no society” really means. It means poor people can die an “honorable death” in service of the economy. Workers in “essential” jobs, which tend to be hourly and poorly paid, are risking their lives and those of their family members for $12 an hour, $10 an hour, $7.25 an hour.

Now these “essential workers” — the cashiers and health care workers and bus drivers and elder-care aides and sanitation workers and cable guys and Amazon warehouse pickers, who for years have been told by their paltry wages and benefits and lack of dignity at work that they’re unskilled and utterly replaceable — are being lauded as heroes for risking their health to keep the country running. For most of them, it’s a choice between taking that risk or their families being evicted.

You can bet that these chronically undervalued workers are having a common experience right now that’s unprecedented in American history: the simultaneous realization that all of their bosses are more than willing to trade their lives for money. And workers are starting to question why, if they’re so essential, their lives and paychecks are so cheap. They’re realizing that they’re the foundational Jenga blocks, without which the tower would fall. The “essential” designation is a blueprint for which workers, if they got together and withdrew at the same time, could completely topple the country.

The idea that every man is an island has, through neoclassical economics, shaped monetary policy around the world since the 1970s. The theory is that each individual is a rational actor, making rational choices in rational markets; in an evolution-like process, these market forces naturally result in an equilibrium where things get better and better. If a job is bad, for example, workers will leave, and the boss will have to improve conditions or pay better if she wants anyone to work for her. Workers and bosses, producers and consumers — they’re all equal, with equal amounts of power in the market. It’s a cold, pure equation, a natural set of checks and balances.

In this every-man-an-island, free-market view, government intervention inherently does more harm than good. As President Ronald Reagan put it in 1986, “The nine most terrifying words in the English language are ‘I’m from the government, and I’m here to help.’” It’s a largely bipartisan sentiment — even President Clinton proclaimed that “the era of big government is over” in his State of the Union address a decade later. For the world to operate efficiently, we’ve been told, it must be a constant Hobbesian “war of every man against every man.” Every man must be an island. It’s just how things work.

Americans tend to look at big societal problems and see only individualist solutions. Look at the comments on any article about recent work stoppages in Amazon warehouses or fast-food chains, advising workers to improve themselves and find a better job if they don’t like the one they have. Or the idea that the best thing to do if you don’t like the way Amazon treats their warehouse workers is to stop buying things from Amazon.

I recently wrote a book that’s critical of the company, and I sometimes get asked why it’s listed on Amazon, or (often sheepishly) if it’s bad to buy my book through Amazon. The answer is that it doesn’t matter. Amazon and other business titans are just too big to be affected by individual consumer choice. It’s like a gnat biting a kraken. The only thing that could rival the power that corporations have amassed is everybody in a country speaking together, as the voice of government, saying, “We’d prefer that workers not be treated this way.”

The coronavirus pandemic has made the enormous flaw in individualism glaringly obvious — individual workers are clearly not the equals of these monstrous, sprawling companies, no matter how much Uber or Instacart may claim that its drivers are just tiny little companies themselves. The only way for workers to have a voice that’s audible in the halls of power is to come together in the giant Voltron of a union.

And even more than that, humans just aren’t designed to be alone. We’re deeply social animals who became the planet’s dominant species specifically because of our capacity for empathy, cooperation, and generosity with one another in hard times. For the vast majority of human history, we lived in bands without private property. “We’re all in this together” is so deeply embedded in our DNA that, in a true emergency, it immediately overwhelms hundreds of years of individualist ideology.

Consider your gut feelings about the guy who bought up 17,700 bottles of hand sanitizer to sell at a markup online. Or about business and thought leaders who almost immediately started floating the idea of sending people back to work ASAP, a plan that would sacrifice thousands of lives to appease the economy as directly as if they tossed thousands of people into a volcano to appease an angry god. Or the initial plan for coronavirus relief that was stingy to people who made less money to incentivize workforce participation.

Those are pretty natural extensions of the “every man is an island” idea, and not out of step with the governing ideology of America. In normal times, they wouldn’t have made headlines — Hand Sanitizer Guy might have even been praised for being an entrepreneurial go-getter. But in the context of a crisis, people almost unanimously reacted with disgust and horror.

Hand Sanitizer Guy immediately became what the New York Times called “a subject of national scorn,” getting a flood of death threats and hate mail. Even Republicans didn’t have the stomach for that early relief bill. And even the most out-of-touch opiners quickly learned to keep their mouths shut about their idea that grandparents would happily die for the sake of the next generation, or that sometimes you just have to sacrifice some people to keep the economy running, or their near-religious obsession with preventing “underserving” people from accessing government benefits.

This is what “no society” looks like, and it’s not just ugly — it’s a death cult. There are no free-market solutions to a pandemic. There’s no free-market answer to climate change, or homelessness, or the rise of new germs that shake off our old antibiotics. If there’s no society, there are no solutions to humanity’s looming existential problems. There’s only the grinning skull-face of eat-or-be-eaten capitalism mouthing, “You’re on your own.”

But American workers are starting to remember the power of togetherness.

Every year for the past few years has had a record-breaking number of strikes and walkouts. And it’s coalescing into something we haven’t seen before this pandemic, like the organized walkouts at multiple Amazon warehouses and fast-food franchises simultaneously. There was even a work stoppage by Instacart shoppers and drivers who, like all gig-economy workers, are independent contractors not technically allowed to collectively bargain.

The idea that profit motive and self-interest are the only possible fuels for society’s gas tank is deeply flawed, and those flaws have rarely been as glaring as they are now. It’s absolutely possible to move away from a fanatical devotion to individualism without ending up as a totalitarian communist state. There are plenty of countries around the world that don’t treat free-market capitalism as a god — in fact, the US is almost alone in our worship of it. And we’re handling this pandemic worse than any other country because of it.

The US must start to question whether “there is no society” is a particularly effective philosophy for running a society, and where we’d like to be on the spectrum between “every man is an island” and “in this together.” Because if you ask American workers, most actually would prefer to not be an island. Just ask yourself what’s scarier to hear right now: “I’m from the government, and I’m here to help,” or “You’re on your own.”

Emily Guendelsberger is the author of On the Clock: What Low-Wage Work Did to Me and How It Drives America Insane. Previously, she wrote about how technological stress has sped burnout among low-wage workers for The Highlight.

What’s next for Mueller’s investigation after Manafort’s conviction?
Fort Worth police had problems way before the Atatiana Jefferson shooting
Why a manual by a control freak is the best thing to read when the world is out of control
These 4 products say everything about America’s gun problem
US airstrike kills Iranian Gen. Qassem Suleimani: what we know
Shooting at Jacksonville, Florida video game tournament: What we know so far