The eternal adolescent voice of The Catcher in the Rye, in one passage 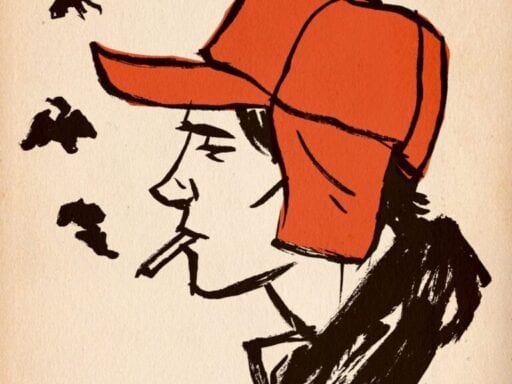 It’s become a truism that if you read A Catcher in the Rye at 14, you love Holden Caulfield, and if you read it at 20, you hate him. But when I reread it recently as an adult — 100 years after J.D. Salinger’s birth — I just felt sorry for him. That boy spends so much energy judging people that his life must be exhausting.

Holden Caulfield is the eternal voice of the adolescent male: riddled with nostalgic protectiveness for children and fury toward adult phonies, irreverent and very aware of how cool he thinks that irreverence makes him, while at the same time obsessed with certain “rules.”

He’s convinced he has mastered the complex unspoken social codes of the world, and it makes him furious when other people don’t abide by them the way he thinks they should. He hates phonies, of course, but he’s also repulsed by what he sees as ignorance. He can’t stand the schoolmate who doesn’t understand that when you pick up a knee supporter from someone’s chiffonier, you shouldn’t put it back on their bed. He is filled with righteous indignation when girls don’t offer to pay for their own drinks — he wouldn’t have let them, but for form’s sake, he insists, they really should have tried.

Holden is, like most adolescent rebels, a rule follower at heart, and he exerts so much energy hating the people who break his rules that it is exhausting just to read about. So it’s a relief when he sits down with his former English teacher, who tells him that if he doesn’t relax on this hating people business, he’ll be headed for a fall:

“It may be the kind where, at the age of thirty, you sit in some bar hating everybody who comes in looking as if he might have played football in college. Then again, you may pick up just enough education to hate people who say, ‘It’s a secret between he and I.’ Or you may end up in some business office, throwing paper clips at the nearest stenographer. I just don’t know. But do you know what I’m driving at, at all?”

“Yes. Sure,” I said. I did, too. “But you’re wrong about that hating business. I mean about hating football players and all. You really are. I don’t hate too many guys. What I may do, I may hate them for a little while, like this guy Stradlater I knew at Pencey, and this other boy, Robert Ackley. I hated them once in a while — I admit it — but it doesn’t last too long, is what I mean. After a while, if I didn’t see them, if they didn’t come in the room, or if I didn’t see them in the dining room for a couple of meals, I sort of missed them. I mean I sort of missed them.”

It’s one of the few times in the book where Holden gestures toward forgiving the people who don’t live up to his exacting standards, toward recognizing that people have value and worth even when they break his rules. It’s almost enough to give you hope for the future — but then the English teacher tries to molest Holden while he sleeps, so that kills that idea.

Still, the passage exemplifies Holden’s slow crawl toward self-awareness and self-reflection. It develops the tension between his adolescent desire for black-and-white morality and his emerging adult recognition that people can do things that annoy you and still be basically good people. And that tension is what gives A Catcher in the Rye its forward drive.

If you read the book in celebration of Salinger’s 100th birthday, you can have a little celebration for yourself too. I’ll be having one in recognition of the fact that I am no longer a teenager and no longer have to waste Holden Caulfield levels of energy on judging everyone around me. You could not pay me enough to go back.

US extends coronavirus guidelines, Olympics set new date: Monday’s coronavirus news
Bolsonaro’s supporters in Brazil are threatening journalists and spreading fake news
Nancy Pelosi sets a 48-hour deadline for getting a stimulus deal before the election
The debate about whether expanded unemployment insurance is too generous, explained
3 key solutions to California’s wildfire safety blackout mess
Most courts are closed due to coronavirus — but not those that serve high-risk populations