The execution of Rodney Reed has been stopped 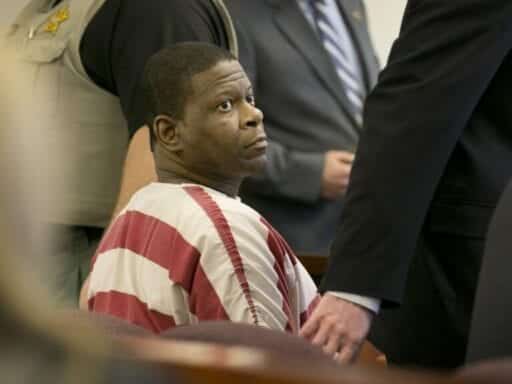 Amid a growing movement to #FreeRodneyReed, an appeals court has ruled that new evidence must be considered.

An appeals court has stayed the execution of Rodney Reed, who was scheduled to be executed next week for a murder he says he did not commit.

On Friday, the Texas Board of Pardons and Paroles voted unanimously to delay Reed’s execution by 120 days; shortly after that, Court of Criminal Appeals in Texas ruled to also halt the execution and ordered that new evidence be considered by the court in which Reed was originally tried.

“At every turn we have asked for a hearing at which we can present the evidence, in full, of Rodney Reed’s innocence,” one of Reed’s lawyers, Bryce Benjet, told the New York Times. “So it is extremely rewarding that we can finally have a chance to fully present his case in court, so it can be determined that he did not commit this crime.”

In October, a new witness came forward claiming that it was not Reed who killed Stacy Stites in 1996, but her fiancé at the time, a former police officer named Jimmy Fennell. Reed’s lawyers and the Innocence Project, a nonprofit organization for criminal justice reform, filed an application for clemency with the Texas Board of Pardons and Paroles following the sworn affidavit of Arthur Snow, who said Fennell confessed to the murder of Stites when the two men were in prison together. In addition to Snow’s testimony, several other witnesses have come forward with similar stories around Fennell and his disdain for his fiancé, a white woman who he suspected was sleeping with Reed, a black man, behind his back.

Reed, 51, has long admitted to having been in a romantic relationship with Stites, but at the time of the trial, no witness would corroborate the affair. Now, Stites’s cousin and a former coworker have both said the two were involved, according to the Innocence Project. Reed’s lawyers told the Times that other witnesses could still come forward and they may even subpoena Fennell. (Fennell’s attorney told the Times that his client maintains his innocence.)

National attention to Reed’s case — and the call to reexamine it — had grown in recent weeks. A petition on Change.org has garnered over half-a-million signatures asking for the execution to be stopped and a new trial ordered. Nearly 100 supporters of Reed also showed up to the capitol building in Austin, Texas, earlier this month to urge Gov. Greg Abbott to show clemency. Celebrities like Rihanna and Meek Mill have also urged the governor to free Reed.

16 days left and he will be executed for a crime he didn’t commit .. get more info here! #freerodneyreed https://t.co/Njm7QsTNtx pic.twitter.com/ifSGk6ssqg

”Please @GovAbbott How can you execute a man when since his trial, substantial evidence that would exonerate Rodney Reed has come forward and even implicates the other person of interest. I URGE YOU TO DO THE RIGHT THING,” tweeted Kim Kardashian West, who also notably used her influence in the clemency cases of Alice Johnson and Cyntoia Brown in recent years.

Even Republicans, like Sen. Ted Cruz, stepped in to advocate for Reed, writing a letter to Gov. Abbott and the parole board asking to stay his execution, which was scheduled for Wednesday. With the court’s late-minute reprieve, the attention and advocacy seemed to have paid off.

Reed wasn’t the first suspect in Stites’s murder. It was her fiancé, Fennell.

In 1996, the body of 19-year-old Stacey Stites was found in a wooded area in Bastrop, Texas, having been assaulted, raped, and strangled. When the case was first opened, police initially questioned and suspected Fennell of committing the crime. Fennell went on to fail two lie detector tests administered by the police, but the DNA found on Stites’s body didn’t match Fennell’s.

That’s when the investigation shifted to Rodney Reed — his DNA was a match, according to police. Reed admitted that he and Stites were having a sexual relationship behind Fennell’s back but maintained that he was innocent and was not involved her in death. Despite having another viable suspect in Fennell, police arrested Reed. He was tried, found guilty of murder, and sentenced to death.

Now nearly 21 years since the verdict, much is in question following the new evidence obtained by Reed’s attorneys and the Innocence Project. On October 30, Snow filed a sworn affidavit stating that in 2010, Fennell admitted to killing Stites while the two men were both serving time at a DeWitt County, Texas, prison. According to the affidavit, Fennell, who was there on a rape conviction, was in need of protection from the Aryan Brotherhood, so he went to Snow, who was a brotherhood member, and confessed to the crime as a way to build trust.

“Toward the end of the conversation, Jimmy said confidently, ‘I had to kill my n*****-loving fiancé,’” Snow wrote in the affidavit. Snow said he later realized that Reed was serving time for Stites’s murder after reading an article about him; he has only come forward now after seeing a more recent story about Reed, he said.

Fennell’s attorney responded to Snow’s allegation by calling Snow a career criminal, according to CNN, and that following Fennell’s release for rape, his client has converted to Christianity and begun helping people with drug addictions.

However, others have also claimed in recent weeks that it was Fennell who killed Stites. Heather Stobbs, a cousin of Stites’s, now feels that Reed was wrongly convicted and even possibly framed. She told the Fox affiliate in Austin that she has no doubt in her mind that Fennell did it.

The movement to #FreeRobertReed spread wide

Even before Snow came forward, a social media movement started putting pressure on Gov. Abbott to release Reed. Kardashian West’s tweet plea came about a month ago. Meanwhile, Black-ish star Yara Shahidi quoted Audre Lorde in a tweet: “Without community there is no liberation,” urging people to sign the petition. Cyntoia Brown, who was granted clemency earlier this year for killing a man who had allegedly solicited her for sex as a teen, also tweeted out the petition for Reed’s clemency.

I just signed this petition to tell @GovAbbott to stop the execution of Rodney Reed. You should too! #FreeRodneyReed https://t.co/qOhsaEJGbH

The biggest surprise, though, came from Republicans who also asked the governor to delay the execution. Sen. Cruz, along with seven fellow Republican state senators and eight Democrats, wrote Abbott and the parole board a letter on Wednesday asking them to look at the new evidence and witness testimony.

“If there’s a real question of innocence, the system needs to stop and look at the evidence, because an innocent man should be set free,” said Cruz.

While the pressure to stay Reed’s execution ultimately worked, cases like his have not historically ended in the inmate’s favor. According to a 2014 study, one in every 25 people with a death sentence is innocent. Between 1973 and 2014, 144 people on death row have been exonerated, or 1.6 percent of all death sentences. That means that many innocent people — over twice the number of those who’ve been spared — have likely been executed.

In a case similar to Reed’s, Troy Davis was executed in 2011 for killing a cop in the state of Georgia. According to the Innocence Project, the organization sent a letter to commute Davis’s sentence “due to serious questions about his guilt,” along with a petition with more than 660,000 signatures, shortly before his death. But in a 3-2 vote, the members of the Board of Pardons and Paroles ultimately rejected the clemency bid.

In Davis’s case, seven out of nine witnesses who aided in the guilty verdict all recanted their statements. Kimberly Davis, sister to Troy, told the Guardian, “If those seven witnesses were credible enough to put my brother on death row, then why weren’t they credible when they recanted?”

In recent years, lawmakers and the public have been forced to reckon with the harsh sentences and convictions of black people caught up in a biased justice system. A few of those cases have even ended redemption, like that of Brown and Alice Johnson, a great-grandmother who was serving a life sentence for drug-trafficking. The power of social media, protest, and petition created enough pressure to sway those in power to grant those women clemency. While Abbott hasn’t done the same for Reed, the courts have at least opened the doors, once again, to allow him to prove his innocence.

The 9 most important unanswered questions about Covid-19
Germany, Vietnam, and New Zealand have reopened schools. Here’s what the US can learn.
The Supreme Court rejects Texas’s undemocratic election lawsuit
Mollie Tibbetts’s family doesn’t want her death politicized. Trump is doing it anyway.
Amazon’s Ring blamed hacks on consumers reusing their passwords. A lawsuit say that’s not true.
The rise and fall of the Hummer, America’s most needlessly masculine vehicle