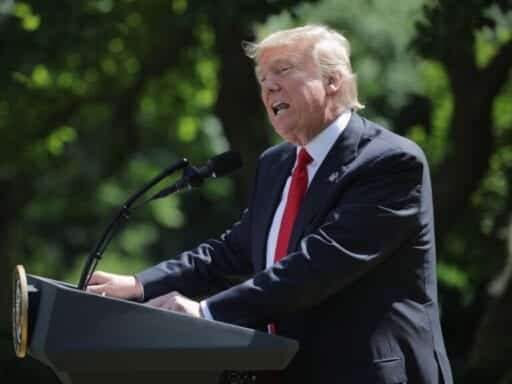 Share
Loading...
President Donald Trump announces his decision to pull the United States out of the Paris climate agreement in the Rose Garden at the White House June 1, 2017, in Washington, DC. | Chip Somodevilla/Getty Images

To find out how 2020 Democratic candidates would use their presidential powers to address climate change, we sent six key questions to every campaign. This post includes nine candidates’ answers to the third question. You can find answers to the other five questions on the landing page.

If Republicans control one or both houses of Congress and legislation stalls, what executive actions are you prepared to take to reduce carbon emissions?

Biden: On day one, [I] will sign a series of new executive orders with unprecedented reach that put us on the right track to address our climate crisis. These executive actions will focus on:

Warren: My plan for public lands includes signing an executive order on my first day as president that says no more drilling — a total moratorium on all new fossil fuel leases, including for drilling and fracking offshore and on public lands. I will reinstate the methane pollution rule to limit existing oil and gas projects from releasing harmful gases that poison our air and reinstitute the clean water rule to protect our lakes, rivers, and streams, and the drinking water they provide. I will get us back into the Paris climate accord and restore the vehicle emission standards and the Clean Power Plan.

I will also use all the tools of international trade to lead the global effort to combat climate change. I will make being party to the Paris Climate Accord and ending fossil fuel subsidies preconditions for any trade deal. I will push for a multilateral trade agreement to protect green policies like subsidies for clean energy and I will impose a border carbon adjustment to charge a fee to imported goods made using carbon-intensive processes.

There’s a lot a president can do herself. I intend to use every tool to take action to defeat our climate crisis.

Bernie Sanders: The bottom line is that there is a climate emergency which demands a massive-scale mobilization to halt, reverse, and address its consequences and causes. As president, [I] will declare a national emergency on climate change and take immediate, large-scale action to reverse its effects. This is an existential threat and we will do whatever it takes to confront it.

[I] will use executive authority to ban fossil fuel extraction on public lands, effectively ban fracking and mountaintop removal coal mining, ban offshore drilling, ban imports and exports of all fossil fuels, end all new federal fossil fuel infrastructure permits, aggressively regulate greenhouse gas emissions, use regulations to help us decarbonize our transportation and energy sectors, rejoin and strengthen the Paris Climate Agreement, and place a fee on imported carbon pollution-intensive goods. As president, [I] will impose sanctions on corporations and entities that threaten national and global emissions reduction goals.

[I] will break up big agribusinesses that have a stranglehold on farmers and rural communities and negatively impact our environment, and enforce the Clear Air and Water Acts on large factory farms. And [I] will focus the federal government’s significant resources, including procurement, on transitioning to a 100 percent clean energy economy.

Harris: Some things we can do:

Buttigieg: I’d rejoin the Paris climate agreement and use every tool available to the President to regulate carbon emissions across economic sectors. I would also use the office to capitalize on the increasing interest in a carbon fee and dividend from some Republican Members of Congress. We need to remember that people are policy, so I would appoint leadership of the Environmental Protection Agency, Department of Energy, and other key places with people who actually believe in environmental protection and solving climate change. Lastly, we can’t overlook action at a local level, so I would convene local leaders for a Pittsburgh Climate Summit to build commitments and share strategies to tackle carbon emissions.

O’Rourke: As President, [I] will use [my] executive authority not only to reverse the problematic decisions made by the current administration, but also to go beyond the climate actions of previous presidents. These executive actions would include, but are not limited to:

Steyer: I will not hesitate to use the emergency powers of the presidency to protect the American public from the climate crisis, just as I would use those powers to protect our country from a hostile military invasion.

My plan will eliminate fossil fuel pollution from all sectors to achieve a 100% clean energy economy and net-zero global warming pollution by no later than 2045. This means massive and immediate mobilization to decarbonize every sector in an equitable way, including transitioning to clean electricity, setting strong standards for new buildings, retrofitting existing buildings to improve indoor air quality and energy efficiency, accelerating electric vehicle deployment and charging infrastructure, stopping methane leaks and eliminating the use and production of global warming super-pollutants, and efforts to expand new development while meeting pollution reduction goals.

Every part of the executive branch of government will bring its rules, purchasing decisions, and agency staff in line with our global and domestic science-backed carbon emissions reduction goals. My administration will immediately stop issuing leases to coal, oil, and gas companies for mining and fracking on federal lands, offshore, and in the Arctic, and rapidly and responsibly phase out existing operations. We have the tools to lessen the effects of this climate crisis, and I will ensure that they are not delayed, wasted or misdirected.

Klobuchar: As part of [my] plan for the first 100 days of [my] presidency, [I have] committed to taking the following actions to address the climate crisis:

Bennet: As outlined in my climate change plan, if special interests block my climate plan from becoming law within my first nine months in office, I will act through the executive authority in the Clean Air Act and other statutes, and I will commit the resources necessary to the Departments of Justice and Energy and the Environmental Protection Agency to defend that action in court.

Senate Republicans’ narrow new police reform bill, explained
The techlash hasn’t come up in the Democratic presidential debates. Warren could change that.
Andrew Yang has a good answer for one of the toughest climate change questions
4 winners and 2 losers from the 2019 State of the Union
Why video games aren’t causing America’s gun problem, in one chart
The Supreme Court will hear my case today. Trump will not win on DACA.