The extremely small number of votes it takes to win the Iowa caucuses, explained 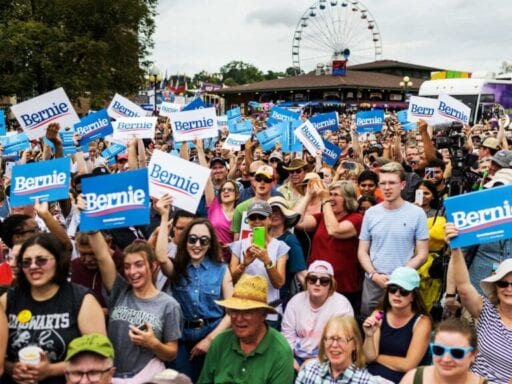 And why it’s so hard to get them.

The winner of Iowa’s Democratic presidential caucuses will likely draw in less support than a competitive congressional race in the state.

On February 3, the nation will be looking to Iowa, where the first Americans will be able to cast their vote in the 2020 presidential elections. But if the field of 17 candidates stays that stacked, the winner could walk away having only received the support of 40,000 to 50,000 caucus-goers statewide — fewer people than live in Dubuque, Iowa.

In some ways, this math means the race is up for grabs.

“It’s a relatively small number, right? It’s the size of a sort of medium-sized town,” said David Redlawsk, a political science professor at the University of Delaware and an expert on the Iowa caucuses. “In Congressional elections, winners normally have more than 100,000 votes.”

Of course, we still don’t know what the 2020 turnout will be or how many candidates will still be running, but ultimately, a small sliver of Iowa’s population participates in the caucuses. About 171,000 Democratic caucus-goers participated in 2016, just 15.7 percent of the overall population. That’s about a quarter of the population of Washington, DC. When it’s over, millions of campaign dollars and hours spent campaigning in Iowa will all be spent to win the hearts of a small number of American voters.

But unlike primaries where the raw vote totals dictate the winner, Iowa has an electoral-college-like system that rewards having support across the state. To win, candidates have to out-organize each other across the state — and not only make the case to turn out their own supporters but also be able to persuade other candidates’ supporters to switch to them on the day of the caucuses.

Presidential campaigns and local political experts and activists are bracing themselves for what could be an especially hectic Iowa caucus night on February 3, including John Deeth, a longtime party activist and member of the Johnson County Democrats executive committee. He’s tasked with organizing the county’s caucuses next year and expects high turnout — and the resultant mayhem that creates. “I am anticipating chaos and anarchy,” he said.

How to win an Iowa caucus, briefly explained

Iowa’s caucuses aren’t your normal election; there’s no absentee mail-in ballot or early voting. For Democrats in particular, it’s a public, hours-long event where Iowans have to physically travel to one of the state’s 1,678 precincts — a community center, high school gym, or a public library — to participate.

Participating means physically congregating with people that support the same candidate. If a candidate fails to gain the support of at least 15 percent of attendees in the room, that candidate is cut from the running and their supporters have one opportunity to realign themselves with a different candidate. If a candidate does have at least 15 percent of the room behind them, then the supporters are locked in with their vote.

Political experts in Iowa told Vox they’re estimating 2020 caucus turnout could be somewhere in between 2016 and the record-setting 2008, which saw 236,000 Democratic caucus-goers show up (still just about a 16 percent turnout). For context, New Hampshire, the first-in-the-nation primary that goes after Iowa and has an even smaller population than the Hawkeye State, had turnout over 50 percent both years.

In a caucus, more candidates and higher voter turnout translates into more chaos. For example, Deeth and Sterzenbach floated the possibility that undecided voters could make up a 15 percent block in a room — and then be locked out of changing their vote.

This system also changes candidates’ priorities. Unlike other states where winning means getting the most votes, in Iowa delegates are allocated by precinct (based on a complicated formula); doing exceptionally well in liberal, heavily populated Iowa City doesn’t mean you win outright if you cannot perform in smaller rural precincts throughout the state. That means candidates have to strategize all around.

“I really feel like this is an open race and I can tell you that because I have knocked on doors,” said Penny Rosfjord, who chairs the Iowa Democratic Party’s fourth district and has committed to Sen. Kamala Harris. “Sometimes it has been that people have really worked hard and really tried to turn out the smaller counties. If you stack enough of those up, you are going to be in the hunt in the big picture.”

The campaigns on the ground will tell you that the Iowa caucuses are about organizing in a way that’s different from any other state.

“Success in the Iowa caucuses demands precinct-level organization in every corner of the state — east to west, urban to suburban to rural, and among every constituency,” Jason Noble, Warren’s Iowa spokesperson, said.

You have to think about ensuring a caucus-goer can get off work, has a ride to the precinct, and can access the child care needed to be able to spend three-plus hours shuffling around a high school gym to vote. And it also means campaigns need that infrastructure in place across the whole state.

“It’s not whether you can run up a score in one precinct but if you can be viable in a lot of different kinds of precincts,” said Jesse Harris, a veteran of Obama’s Iowa operation who is now advising Biden’s campaign.

Campaigns including Warren, Sanders, Buttigieg, and Biden — among those that are most likely to meet the 15 percent threshold in any given precinct — said they are hoping to staff every single precinct with volunteers. Sanders’s campaign announced this week that they have already trained more than 1,000 caucus volunteers, which involves a four-part course around delegate math, persuading voters on the ground, and organizing. They have 44,000 people in the state that have taken some kind of action to support the campaign, whether a donation or on-the-ground organizing. And there’s an awareness that number could make or break the race for Sanders.

“This is not about big crowds,” Misty Rebik, Sanders’s Iowa state director, said, just days after Sanders held Iowa’s largest presidential campaign rally of the year. They have 133 staffers across 16 offices in the state. “We are very proud of our crowd sizes at our events but we know it has to go deeper than that.”

Several national polls have given a snapshot of voters’ second choices — but much of the focus has been around the top-tier candidates like Warren, Sanders, Biden, and Buttigieg.

Those are the four candidates that have been leading Iowa polls for months now. Warren is ahead by a slight margin, according to the RealClearPolitics average, with new polls showing Buttigieg and Sanders both gaining some momentum. All in all, the polls show a race that’s still pretty fluid.

To win the state, the second choice for voters that back the other 13 candidates, from former Housing Secretary Julián Castro to Sen. Amy Klobuchar, is far more powerful. The lower-tier candidates, those that are still only registering single digits in the polls, will likely be cut from the running in the first round of caucusing, unable to gain 15 percent of support, and their supporters will have to decide whether they want to vote for their second choice or go home.

“The second choices are going to matter more than they usually do because there’s going to be a lot of not viable candidates,” Deeth said. This math has some campaigns that have consistently been polling in the double digits — but not quite in the lead — feeling more optimistic.

“The 15 percent threshold is going to be important in this election,” Rebik said. “It’s fine if people think they are going to gain momentum magically, but at the end of they day they have to be viable.”

This process, called realignment, has been a crucial part of organizing for campaigns from the beginning. Sanders staffers said they’re focused on training volunteers to make the case in the room. Rebik noted the campaign is also working on technology to help the campaign’s precinct captain do the delegate math in the room — and send results more quickly to headquarters.

As did Biden’s campaign.

“From the very beginning, if someone is supporting another candidate, we will ask if the Vice President will be their second choice — we have been coding that from the beginning,” Harris said. “If you can walk in the door with 25 percent of the [caucus-goers], you could walk out with 35 percent.”

Come February it is really anybody’s race to win, as long as they can prove their organizing chops can effectively span the entire state. It means covering a lot of ground, but not necessarily bringing in a lot of people.

“A candidate can shake the hand of everybody who will caucus for them in Iowa,” Redlawsk added.