The facts behind Trump’s bogus accusations about Biden and Ukraine 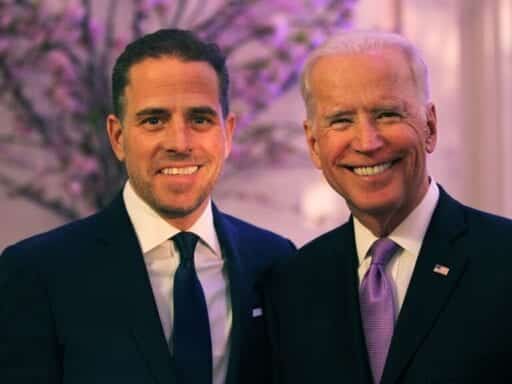 A whistleblower complaint reportedly claims President Donald Trump attempted to coerce Ukrainian leaders to investigate a potential political rival, former Vice President Joe Biden. That complaint has grown into a scandal: At its heart is a question of whether Trump used the power of his office to attempt to influence a foreign country to meddle in the 2020 election.

But while the president has admitted to discussing Biden with Ukraine, he insists — despite no apparent evidence to support this — that there is another, more important scandal to focus on: the former vice president used his office to help the business interests of his son, Hunter Biden.

The gist of Trump’s theory: Biden played a role in the removal of Ukraine’s top prosecutor in 2016; Trump, repeating a conspiracy theory popularized by his personal lawyer Rudy Giuliani, maintains the former vice president did so to protect his son. Biden and the Ukrainian prosecutor, Trump claims, is the “real story” — not a whistleblower’s complaint that Trump improperly used his influence over foreign policy to damage a political rival.

The evidence suggests Biden actually may have placed his son in legal danger by advocating for the prosecutor’s removal because he was widely accused of stymying anti-corruption efforts in Ukraine — replacing him could have led to further investigations into a company Hunter Biden had ties to.

Trump evidently sees the conspiracy theory as a way to turn the whistleblower’s complaint into electoral gain — perhaps in hopes of saddling the frontrunner for the Democratic nomination with a Benghazi-like scandal that just won’t go away. He has repeatedly misrepresented facts, characterizing the prosecutor who was removed as “tough,” and saying he wants to stop “people like Vice President Biden and his son creating to the corruption already in the Ukraine.”

Meanwhile, Trump is facing increasing scrutiny from national media, and Democrats say his actions are grounds for impeachment.

The facts of this story begin in April 2014, when Hunter Biden joined the board of a Ukrainian natural gas company named Burisma Holdings, shortly after his business partner in an investment and consulting firm, Devon Archer, came aboard. Although Biden had no apparent expertise in the field, he had helped Burisma previously as a consultant with expertise in dealing with multinational regulations, and he was employed at a law firm retained by Burisma’s owner, former Ukrainian government official Mykola Zlochevsky.

When Biden joined Burisma’s board, both the company and Zlochevsky were already the subject of intense controversy. Zlochevsky had served as a top official for Ukrainian president Viktor Yanukovych, who was forced out of office in early 2014, in part due to concerns over rampant corruption. Zlochevsky was accused of corruption as well, including for steering large government contracts to companies he owned.

One party investigating these allegations was the United Kingdom, because Zlochevsky had $23 million in a British bank account that UK officials believed has been laundered. Britain’s Serious Fraud Office froze that account, and shortly after Yanukovych left office in February 2014, sent a request to Ukrainian officials for documents it believed would help in prove its case. Following this request, the new Ukrainian government began its own investigation into Zlochevsky, looking into whether he embezzled public money.

In the midst of these troubles, Hunter Biden accepted a Burisma board seat, and was paid for his trouble, sometimes as much as $50,000 per month. It is unclear what he did for the company. Burisma said at the time that Biden — a lawyer — would be “in charge of” a legal unit. Biden told the New York Times in May 2019 that this was incorrect: “At no time was I in charge of the company’s legal affairs.”

Though none of this looks great for the Bidens, it is, unfortunately, routine business in Washington to hire the family members of powerful officials in hopes of gaining influence over public policy. For example, President Jimmy Carter’s brother, Billy; President George W. Bush’s brother, Neil; and Secretary of State Hillary Clinton’s brothers, Tony and Hugh Rodham were all involved in business interests that once drew concern.

Meanwhile, the UK and Ukraine continued to investigate Zlochevsky and other Yanukovych officials, often with the support of the US. But eventually, British investigators began to grow frustrated with what they characterized as a lack of cooperation from their Ukrainian counterparts, saying needed documents weren’t being provided.

The US became increasingly involved in the issue, and by December 2014, had sent a letter warning the new government would be forced to face unpleasant consequences if it didn’t do more to aid the UK. That threat went unheeded, and by 2015, British officials were forced to release the frozen funds, which Zlochevsky immediately moved to Cyprus, according to Bloomberg.

The part of the story that involves Joe Biden directly centers on the ouster of Ukraine’s prosecutor general, Viktor Shokin.

In February 2015, Shokin became Ukraine’s prosecutor general, and promised critics of his country’s anti-corruption efforts at home, in the US, and at the International Monetary Fund (IMF) that a clean-up was on the way. And he claimed Burisma was in his sights.

But Shokin’s deputy, Vitaly Kasko, told Bloomberg that the promise was empty rhetoric. According to Kasko, their office did nothing to pursue its investigation into Zlochevsky throughout 2015, and the office was ineffective at reining in corruption generally, leading him to resign in frustration.

Shokin has disputed Kasko’s narrative, but the manner in which he was running his office also concerned the US ambassador to Ukraine, who said publicly in September 2015 that the office was “subverting” the UK’s investigation.

Concern at the embassy mounted, and by 2016, officials there began suggesting the Obama administration push for the prosecutor general’s ouster. In particular, the embassy suggested that $1 billion in loan guarantees the country hoped to receive from the US in order to stay solvent should be tied to a tougher anti-corruption strategy that involved removing officials seen as blocking progress, namely Shokin.

It wasn’t just the US that wanted Shokin gone, either — many other Western European officials, including the IMF’s then-managing director Christine Lagarde, also insisted Ukraine was doing far too little about corruption.

So in March 2016, Biden says he told the Ukrainian government that their loan guarantees would be cut off unless they removed Shokin. He told the story at a session at the Council on Foreign Relations in 2018.

But though Biden may have taken credit for it, this was hardly his unique idea. “Everyone in the Western community wanted Shokin sacked,” Anders Aslund, a senior fellow at the Atlantic Council, told the Wall Street Journal. “The whole G-7, the IMF, the EBRD, everybody was united that Shokin must go, and the spokesman for this was Joe Biden.”

The people of Ukraine wanted Shokin gone as well, and demonstrated for his removal around the time of Biden’s threat. Shortly after that demonstration, Shokin was dismissed.

Trump and his allies have asserted — without any evidence — that Biden’s ouster of Shokin was itself corrupt, and specifically that it was aimed at protecting Hunter and Burisma from a corruption investigation led by Shokin.

Trump has tweeted the Bidens are “stone cold Crooked.” House Minority Leader Kevin McCarthy has called concerns over the whistleblower’s complaint as a Democratic scheme fool the public into ignoring “what Biden was doing.” And Sen. Lindsey Graham (R-SC) has said he wants the Justice Department to “look at the Biden-Ukraine connection, like we looked at the Trump-Russia connection.”

Biden spokesperson Kate Bedingfield said all this is nonsense, and that Biden pushed to oust Shokin “without any regard for how it would or would not impact any business interests of his son, a private citizen.”

Biden himself blasted Trump’s efforts to discredit him at the Iowa Democrats’ Steak Fry over the weekend, calling the president’s actions on the phone call “an overwhelming abuse of power.”

“Trump’s doing this because he knows I’ll beat him like a drum,” Biden said. “And he’s using the abuse of power and every element of the presidency to try to do something to smear me.”

And despite his boast last year, Biden seem to have played a very minor role in Shokin’s firing. With the Obama administration, the idea to remove him came from the US’s embassy in Ukraine, and the sentiment the prosecutor was hindering anti-corruption efforts was shared by the US’s partners and Ukrainian citizens. Too, removing Shokin has the potential to hurt Hunter Biden given the US had him replaced in order to ensure someone more fully committed to pursuing an anti-corruption agenda — including an investigation into the former Ukraine official Mykola Zlochevsky — was installed.

Rudy Giuliani has long claimed that these points aside, Biden did indeed do something wrong. Giuliani told the New Yorker that he has talked with Shokin, and that Shokin insists he was seriously investigating Burisma before he was fired. Shokin made the same claim to Ukrainian news agency Strana shortly after his firing.

The question of whether Shokin’s investigation against Burisma was in fact a serious one is disputed, however. His deputy has said it was not, as have US officials based in Ukraine; and according the New York Times, some US and Ukrainian officials believe the former prosecutor was pantomiming an investigation in effort to solicit a bribe from Zlochevsky.

In any case, Ukraine has a new president now: Volodymyr Zelensky, who has also promised to stamp out corruption. And it was in a call with him that Trump reportedly urged him to investigate Joe Biden and Burisma, which he calls the “real story.”

Trump has now taken that call public, and some Republican allies now hope to launch a domestic investigation. In doing so, he has created a counternarrative to combat questions of whether he committed an impeachment offense in his call with Zelensky, albeit one whose effectiveness — particularly given the facts of Biden’s limited interaction with Ukraine — remains to be seen.

The confusing and vague federal guidelines for states to reopen, explained
Study: Trump’s tweets can lead Republicans to lose faith in elections
Coronavirus is the first big test for futuristic tech that can prevent pandemics
How to tell stories about evangelical Christians that neither mock nor glorify them
A life insurance company wants to track your fitness data
The shamelessness of Bill Barr