The fake “Obamagate” scandal shows how Trump hacks the media 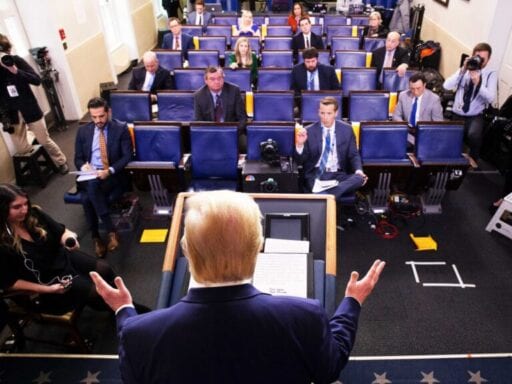 He is “flooding the zone with shit.” And it’s working.

We’ve been introduced to a new conspiracy theory this week: “Obamagate.”

There’s no point in unpacking this theory here because it’s bullshit and everyone knows it. (If you need an explainer, my Vox colleague Jen Kirby has you covered.) But for the sake of a reference point, here’s the simplest version possible: “Deep state” holdovers from the Obama administration allegedly spearheaded the prosecution of former National Security Adviser Michael Flynn as part of a broader scheme to undermine the Trump presidency.

I really don’t want to offer any more details because, again, this is a bullshit story. (Trump, despite promoting it endlessly, couldn’t even explain it when asked by a reporter.)

Because it was OBAMAGATE, and he and Sleepy Joe led the charge. The most corrupt administration in U.S. history! https://t.co/PTzFvvITh3

Watching the media pounce on this story like greyhounds chasing mechanical rabbits has been painful, but also deeply familiar. It’s a pattern we’ve seen unfold countless times. The president unleashes a tweetstorm, millions of people retweet it, right-wing media boosts the signal, and then mainstream media outlets cover it, often breathlessly.

This is the latest example of zone-flooding, a phenomenon I described at length back in February. The strategy was best articulated (in America, at least) by Steve Bannon, the former head of Breitbart News and chief strategist for Donald Trump, who in 2018 reportedly said: “The Democrats don’t matter. The real opposition is the media. And the way to deal with them is to flood the zone with shit.”

This is a new form of propaganda tailored to the digital age and it works not by creating a consensus around any particular narrative but by muddying the waters so that consensus isn’t possible. And it’s all the more difficult because even the most scrupulous, well-intentioned coverage can easily fall into the trap of flooding the zone.

My concern in February was that zone-flooding had created a media environment in which the facts of Trump’s impeachment trial would be utterly meaningless. No matter how the trial played out, no matter what was uncovered, no single version of the truth would be accepted. And that, sadly, is how it played out.

With Obamagate, we’re entering a new cycle of flooding the zone in which it’s increasingly obvious that Trump’s strategy will be to keep throwing into the media ecosystem stories designed to divert attention away from his record.

The goal of zone-flooding is simple: introduce bullshit stories into the information bloodstream, sit back while the media feverishly covers them (from all sides), and then exploit the chaos that results from the subsequent fog of disinformation.

It’s an approach that thrives on conventional journalistic norms around objectivity and fairness. The Washington Post’s Greg Sargent, a sharp observer of this process, explained it well in a recent piece. His point, like mine, is that reporting on deliberately misleading stories in ostensibly objective ways serves only to reward the bad-faith actors spreading the nonsense in the first place.

The AP, for example, ran an article with the headline: “Flynn case boosts Trump’s bid to undo Russia probe narrative.” The word “boosts” appears neutral, but it isn’t. The Flynn case is a nothingburger and doesn’t inherently boost anything. But saying it does, even in such an impartial fashion, is self-fulfilling. At the very least, it cements the impression that there’s something here when, in fact, there isn’t.

This is a subtle but instructive example. As with Axios, there’s an air of objectivity. But here, as elsewhere, the act of communicating the “information” has the effect of normalizing it. To cover something is always to dignify it, to deem it worthy of rebuttal. And in the end, all it does is propel a false conversation on false terms to the great delight of the purveyors of the misinformation.

Thus, the zone is flooded with shit.

The press, admittedly, has a difficult job to do, especially in this information landscape. But that’s the thing: The landscape has changed. The digital media ecosystem overwhelms people with information. Some of that information is true, some of it is false, and much of it is deliberately diversionary. Trying to cover every crazy story, every batshit claim, is a fool’s errand. The end result of so much noise is what I’ve called “manufactured nihilism,” a situation in which people are so skeptical about the possibility of truth that they give up the search.

And the zone-flooders, like Trump, maintain an enormous advantage because they’re not seeking to persuade anyone of anything. They don’t even need to have a strong case — Obamagate is so obviously flimsy. They just need to be shameless enough and relentless enough to spread an obviously flimsy non-story. And they just have to introduce enough doubt to ensure that people won’t mobilize around a coherent narrative.

In a world with weakened gatekeepers, where no one can control the flow of information, this is remarkably effective. Here’s how I distilled it in February:

The role of “gatekeeping” institutions has also changed significantly. Before the internet and social media, most people got their news from a handful of newspapers and TV networks. These institutions functioned like referees, calling out lies, fact-checking claims, and so on. And they had the ability to control the flow of information and set the terms of the conversation.

Today, gatekeepers still matter in terms of setting a baseline for political knowledge, but there’s much more competition for clicks and audiences, and that alters the incentives for what’s declared newsworthy in the first place. At the same time, traditional media outlets remain committed to a set of norms that are ill adapted to the modern environment.

So now we find ourselves engaged in an endless game of whack-a-mole, debunking and explaining one false claim after another. And false claims, if they’re repeated enough, become more plausible the more often they’re shared, something psychologists have called the “illusory truth” effect.

The media, then, is caught in a loop. Trump — or one of his supporters — says something we all know is absurd and false. The rest of the right-wing media and members of the GOP establishment add to the cacophony. And then we dignify the absurdity with coverage that treats it as worthy of rebuke. And in the process, we amplify the false narrative we’re debunking and flood the zone with more and more shit. That leaves people confused and exhausted, unable to discern fact from fiction and inclined to disengage altogether or, even worse, retreat further into partisan bubbles.

The press has always sought to conquer lies by exposing them. But that doesn’t work anymore. There is too much misinformation, too many claims to refute, too many competing narratives. And because the decision to cover something is almost always a decision to amplify it, the root problem is our very concept of “news” — what counts and what doesn’t.

We still haven’t fully reckoned with the 2016 election and the incessant coverage of Hillary Clinton’s emails. That was another bullshit story elevated by journalists who felt it was their duty to “objectively” report it. That impulse for fairness and proportionality might have tipped the election — in any case, it was hugely consequential. And the whole saga demonstrates how even the attempt to disprove a false or exaggerated claim can contribute to zone-flooding.

My critique, to be as clear as possible, is of journalism, not journalists. Most reporters are doing their best to cover the news as it unfolds in real time, and they’re doing it the way it’s always been done. The problem is that the old model of journalism — often called “the view from nowhere” approach — has been hacked, and we simply haven’t adapted to it.

Obamagate is another example of this systemic failure. Here we have — and I can’t say this enough — a complete non-scandal. There’s no there there. It’s pure misinformation. But we’re still talking about it. And I’m writing this piece about it. This is a massive problem. Even though I’m trying to point up a flaw in our system, I’m still somehow participating in the mess I’m hoping to clean up. This is the paradox we’re all up against.

The diagnosis is always easier than the cure, and I don’t have any solutions. The prevailing norms of journalism and the political economy of media are driving these dynamics. But we should see Obamagate for what it is: Trump’s reelection strategy for November and the latest test of our hackable media system.

And if the past few days are any indication, we’re screwed.

After cancelling a retaliatory strike on Iran, Trump warns: “If they do something else, it’ll be dou...
Ma’Khia Bryant didn’t have to die. Deescalation could have saved her.
Why does Hillbilly Elegy feel so inauthentic and performative?
Campuses shutter for coronavirus, leaving some LGBTQ students with nowhere to go
Uber says it’s focusing on safety. Its new report shows that there’s far more to be done.
Playgrounds, babysitters, grandparents: What’s safe for kids in the age of coronavirus?