The fall of Jeremy Corbyn 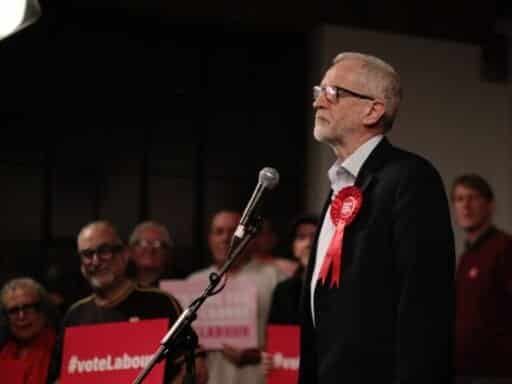 Why Labour lost — and what it means for Britain.

The British electorate voted Thursday in one of the most important elections in the country’s modern history. And the results show that they voted overwhelmingly for Conservative Prime Minister Boris Johnson and for Brexit: a 78-seat parliamentary majority for Johnson and the worst showing for the opposition, the left-wing Labour Party led by Jeremy Corbyn, in nearly 100 years.

This does not appear to be because Johnson was a particularly adept or well-liked political figure. His approval ratings were deeply in the negative, according to prelection data from YouGov. His central campaign promise, finally getting out of the European Union, divided the country in half. He has a reputation as an untrustworthy buffoon and an even more sinister history of racism: He has compared women in burkas to “letterboxes” and claimed that Muslim immigrants lack “loyalty to Britain” because of their religion: “Islam is the problem,” as he put it. He once penned a column describing Africans as “pickanninies” with “watermelon smiles.”

Johnson appears to have benefitted not from his own unique political talents, but from his opponent’s problems. Brexit put Corbyn in a much tougher position than Johnson, needing to appeal to both Leave and Remain voters while Johnson could focus on the former. But Corbyn was also profoundly unpopular personally: While Johnson was at minus 12 in the YouGov approval rating polling, Corbyn was at negative 40.

Corbyn’s attempt to straddle the line on the decisive issue of Brexit ended up with a wishy-washy and incoherent muddle that neither Remainers nor Leavers could believe in. Some of his leftist economic policies polled well, but Corbyn himself wasn’t viewed as a credible leader — even on issues like health care where his policy approach resonated with a lot of the public. He also presided over a significant rise in anti-Semitism in the party’s ranks; he had recently been condemned by the leading Jewish Labour organization for turning their party into “a welcoming refuge for anti-Semites.”

Corbyn is, in some ways, yesterday’s problem. He has already vowed to resign before the next UK election, his political ambitions in shambles.

But the question of how Labour can recover — and what this tells us about the global fight against parties like the Conservatives that embrace right-wing populism — is still very much unsettled.

What happened in the UK election results — and what it means

Historically, both British and European politics more broadly have been heavily determined by class divisions. Left-wing parties like Labour dominated among the industrial working class, while right-wing parties like the Tories did well among society’s upper crust.

But in the past several decades, this historical pattern became unglued. Educated urban professionals have drifted left and the working classes have tiled right, a shift that social scientists attribute to the rising importance of immigration and identity issues in European politics. In Britain, Brexit supercharged this long-running process, as highly educated city dwellers tended to oppose Brexit (making them more likely to vote Labour) while rural and less educated voters tended to support it (making them more likely to vote Conservative).

The 2019 election results reflected the post-Brexit realignment. Labour was absolutely devastated in its traditional working class constituencies (the UK equivalent to congressional districts), with the Conservatives — long caricatured as the parties of the rich — making historic inroads. “The resounding Conservative victory was driven by a dramatic swing of working-class support away from Labour,” as the Financial Times put it in a post-election data analysis.

“In seats with high shares of people in low-skilled jobs, the Conservative vote share increased by an average of six percentage points and the Labour share fell by 14 points. In seats with the lowest share of low-skilled jobs, the Tory vote share fell by four points and Labour’s fell by seven,” the FT said in its analysis. “The swing of working class areas from Labour to Conservative had the strongest statistical association of any explored by the FT.”

This is extremely preliminary: We don’t yet know which voters in these constituencies voted which way, so we can’t yet say whether class itself is the key. Indeed, another analysis by Will Jennings, a political scientist at the University of Southampton, suggested that education level — the percentage of college graduates in a constituency — was actually more important than income level or class per se, which would be consistent with long-term data on European political realignment.

But what’s clear is that Labour’s theory of the case — that its socialist policy manifesto would be able to win back Brexit voters in its traditional working-class heartland and secure the cities — was a failure. The question is why.

The debate among British analysts has largely polarized along pro- and anti-Corbyn lines.

The pro-Corbyn analysis is that Brexit was a unique event that swamped their otherwise popular economic agenda, creating an impossible task for Labour of appealing to both its Remain supporters in London and the Leavers in the north of England.

Anti-Corbyn analysts suggest that his attempt to have it both ways on Brexit — calling for a second referendum but not saying which side he would support — was a poor way of handling the dilemma, depressing Remain voters everywhere without winning over Leavers attracted to Johnson’s simple message. In this view, Corbyn was so incredibly unpopular, his socialism so out of touch with the British public, and his failure to tackle the anti-Semitism crisis so toxic, that he had doomed the party by leading it.

As is often the case in situations like this, the answer is somewhere in the middle. “In a shock move,” UK politics analyst Torsten Bell writes, “the ‘it was Brexit’ vs ‘it was Corbyn’ debate misses the blindingly obvious fact that it was both.”

It’s true that Labour was in a tough position on Brexit, needing to hold support in Leave constituencies and turn out Remain voters. The Tories, by contrast, figured out a way to win on a simple Leave message.

But it’s also clear that Labour did badly across the board: Jennings’s analysis finds that Labour lost support even in cities, a result that suggests that Corbyn’s personal unpopularity was depressing voters who should (on the Brexit theory) be supporting the more Remain-friendly party.

This early analysis suggests that Labour was simply unprepared to fight the battle on the terms the Tories were waging. Though Johnson was widely unpopular, his party also moved to the center on economic issues, a strategy that helped sideline Corbyn’s class-based appeal and emphasized the largely identity-based fight over Brexit. Brexit carried the day by appealing to British insularity and hostility to outsiders. Johnson mobilized voters who found this vision attractive, as well as those simply frustrated with the dragged-out Brexit process, and won a huge victory.

Due to a combination of legitimate strategic difficulty and the gross incompetence of its leader, Labour simply didn’t have an effective response. The question of how to fight back against the Tory embrace of right-wing populism, to mobilize a counter-movement in favor of a more inclusive British identity, is still an open one.

For those of us troubled by the illiberal drift among advanced democracies — not just Britain or Europe, but also the United States — these results cannot be taken as a good sign.

Pope Francis refused to meet with Mike Pompeo so as not to boost Trump
Montana’s Senate race was supposed to be easy for Republicans. It’s a dead heat.
Vox Sentences: A Brexit of a different kind
This rejected Super Bowl ad highlights America’s complicated relationship with marijuana
A political scientist explains why a war with Iran wouldn’t necessarily help Trump in 2020
Want to be in our new YouTube show? Send us a question.