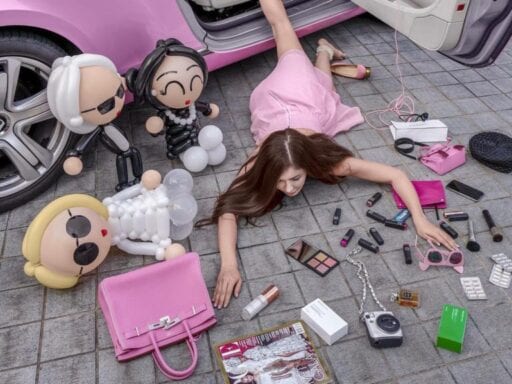 Why are the international superrich suddenly so clumsy?

Jamie Chua, a Singaporean Instagram influencer and multimillionaire, recently posted a photo of herself tumbling out of a pink convertible. One of her shoes had fallen off, and the contents of her two pink Hermès handbags lay scattered seemingly haphazardly around her.

The picture wasn’t an embarrassing paparazzi shot, though; it was part of the #FallingStars challenge, a meme that seems to have originated in Russia and has since taken off in China and the US. It’s kind of like planking, in the sense that the challenge requires participants to lie down on the floor, often with their belongings — shopping bags, wads of cash, balloon-animal versions of Karl Lagerfeld; you know, normal stuff — splayed around them. The effect of these highly staged photos is supposed to be a very casual, “Oops, I fell and dropped my very expensive things on the ground, silly me!”

Unlike other social media “challenges,” #FallingStars is exclusive by design. Anyone can film themselves eating a spoonful of cinnamon or getting a bucket of ice water dumped on their head, but it’s a lot harder for a regular person to photograph themselves pretend-falling down the stairs of a private jet.

In its original form, though, the falling stars meme is emblematic of a rise in luxury consumer culture — and inequality — across the world, particularly in the US, China, and Russia, where the challenge originated.

If you’ve got it, flaunt it

Unlike the genteel, discreet spending habits often associated with old money — and, more recently, with faux-frugal billionaires — the falling stars meme is all about conspicuous consumption. The challenge is more than just a way for people to show off their expensive accessories and designer outfits; it’s also a suggestion that for the so-called falling stars in the photos, those luxury goods are so mundane that they have no problem splaying them on the ground for a photo-op.

And its rise follows a dramatic increase in global wealth and a corresponding increase in luxury spending. According to a 2017 report by Deloitte, consumers in “emerging markets” — China and Russia in particular — are driving growth in the global luxury market. Seventy percent of consumers in China, Russia, and the United Arab Emirates have increased their luxury spending in the past five years, the report found, compared to 53 percent of consumers in the US, the European Union, and Japan.

A June 2018 report on Russian luxury spending by the consulting firm McKinsey & Company suggests that the country’s luxury market, which has slowed down over the past four years, is expected to grow over the next three years. The report also found that millennial consumers in Russia are more drawn to luxury brands when they’re featured in social media posts by their friends or by influencers, as opposed to by brands.

A separate report by Bain & Co. similarly suggests that luxury spending is way up in China — not only among the superrich but also among middle-income people, who are more likely to spend their extra cash on luxury goods than in previous decades.

A harmless meme, or a symbol of growing inequality?

Even if Hermès bags and Acne scarves are no longer reserved for the superrich, the falling stars challenge is indicative of growing inequality in the countries where it has taken off.

Wealth inequality is on the rise in China, which is simultaneously home to more than 800 billionaires and more than 2 million people who live on the equivalent of less than $2 per day. Russia and the United States have even more egregious levels of income and wealth inequality. In Russia, this inequality began taking off after the collapse of the Soviet Union, according to economist Thomas Piketty; in the US, meanwhile, the gutting of social services and the end of New Deal liberalism concentrated wealth among the rich.

In his 2013 book Capital in the Twenty-First Century, Piketty argues that we’re living in a new Belle Époque — a new Gilded Age. “US inequality in 2010 is as quantitatively as extreme as in old Europe in the first decade of the twentieth century,” he writes, “but the structure of that inequality is rather clearly different.”

According to Piketty, wealth inequality at the beginning of the 20th century was the result of wealth being passed down from generation to generation, leading to an unequal distribution of assets and capital. Though the same is true today, the rise of “supersalaries” — the multimillion-dollar annual incomes of CEOs and hedge fund managers — is one of the primary factors driving inequality. (The recent Republican tax plan will result in an even greater concentration of wealth at the very top.)

All of this is to say that much like the Rich Kids of Instagram before them, and the children of 20th-century robber barons before them, many of those participating in the #FallingStars challenge are showing off inherited wealth.

Henry Giroux, a professor and cultural critic at McMaster University in Canada and the author of American Nightmare: Facing the Challenge of Fascism, argues that these ostentatious displays of wealth are more common — and therefore more dangerous — during periods of vast inequality.

The first Gilded Age, Giroux wrote in a 2008 article, was a “historical snapshot of the worst underpinnings of an unchecked and unregulated capitalism.” Our new Gilded Age features a concentration of wealth “among the riches groups in the United States at an alarming rate,” coupled with a rise in conspicuous consumption among the superrich, complete with breathless media coverage of their purchases and exploits.

“Conspicuous consumption has been around for a long time,” he told me, “but I think the level of inequality that we have today is so overwhelming and so dangerous that it’s reinforced by a kind of ethic that’s prevalent in the culture, in which self-interest is all that matters.”

The falling stars meme, Giroux says, is emblematic of a culture in which extreme luxury and extreme poverty have both become normalized. “With that inequality comes a kind of ethical and moral indifference, which is accompanied by worsening conditions for people who are being left out of the ability to succeed,” he said.

As with most things on the internet, the falling stars meme is likely to be short-lived — not because these conspicuous consumers suddenly wise up to the moral implications of their Instagram posts, but because now that it’s trickled down to the masses, the rich kids of Instagram will probably be looking for a new way to flaunt their wealth.

Mark Zuckerberg and Bill Gates are stepping in on the coronavirus where the government has failed
“It’s un-American. And it must stop”: Biden denounces anti-Asian racism
The sudden Democratic shift in favor of impeaching Trump, explained
The deep political meaning of a quarantine haircut
The Justice Department has dropped Michael Flynn’s case
Facebook took down many CBD business pages. Now it says that was a mistake.