The false link between Amy Coney Barrett and The Handmaid’s Tale, explained 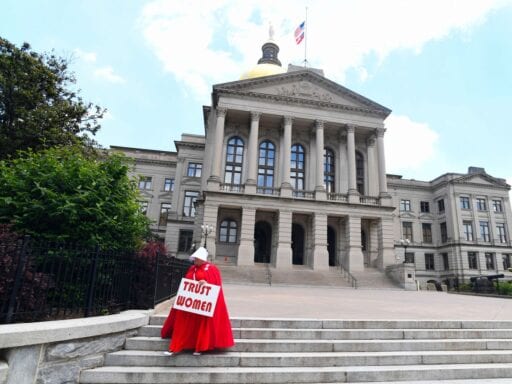 Activist Tamara Stevens, dressed as a Handmaid, leaving the Georgia Capitol, May 16, 2019. | Photo by JOHN AMIS/AFP via Getty Images

They’re not actually connected. But the story spread anyway.

On Friday, multiple news outlets reported that President Trump planned to select Notre Dame law professor and federal appellate judge Amy Coney Barrett to take Ruth Bader Ginsburg’s seat on the Supreme Court. The news threatens to reignite a storm of controversy around Barrett’s religion that has been building since 2017.

Barrett is a devout Catholic. She has written before about how she believes Catholicism should affect a judge’s jurisprudence, and Democrats discussed her views widely when she was nominated to the federal bench in 2017. In a moment that has become infamous on the right, Senator Dianne Feinstein declared that “the dogma lives loudly within you” during Barrett’s hearing, a phrase some conservatives took to be an attack on Barrett’s Catholicism.

Barrett is also part of a small Catholic group known as People of Praise, and that’s where her religious affiliations get especially touchy. Some liberals argue that Barrett’s membership in this group, which teaches that husbands are the heads of families and have authority over their wives, signals that she will hand down religiously motivated conservative opinions if placed on the Supreme Court, particularly when it comes to women’s reproductive freedom and the rights of the queer community. Meanwhile, conservatives reply that Barrett is a high-powered federal judge who is also married, so she can’t be all that oppressed by her husband, and that liberal critiques of the way Barrett’s religion affects her judicial obligations are nothing more than anti-Catholic prejudice at work.

One of the weirder ways this debate has played out since Barrett was first discussed as a potential Supreme Court nominee is the fight over whether or not People of Praise, the group of which she is a member, is also one of the inspirations for The Handmaid’s Tale. In Margaret Atwood’s 1985 dystopian novel (and its recent TV adaptation), fertile women are forced to live as childbearing slaves called handmaids. The book isn’t an established inspiration — but the story has developed legs anyway.

The inaccurate link between the People of Praise and Atwood’s story, perpetuated by a series of confusing coincidences and uneven fact-checking, first emerged in a Newsweek article and was later picked up by Reuters. Both articles have since been corrected, but the right was furious at both. The Washington Examiner called it a “smear that just won’t die.” Fox News is keeping a running list of every outlet that has mentioned Barrett and The Handmaid’s Tale in the same story.

To be absolutely clear: People of Praise is not an inspiration for The Handmaid’s Tale, and the group does not practice sexual slavery or any of the other dystopian practices Atwood wrote about in her novel. But the argument over whether or not the two are connected reflects the deeply contentious atmosphere in which Barrett’s nomination to the Supreme Court will occur — and the immense symbolic weight The Handmaid’s Tale carries in American popular culture.

The Handmaid’s Tale is actually inspired by People of Hope. They’re different from People of Praise.

Two coincidences led to the idea that there is a People of Praise–Handmaid’s Tale connection. The first coincidence is that the People of Praise once had a religious rank called “handmaid.” As reported by the New York Times in 2017, People of Praise members are all accountable to a personal adviser. Those advisers offer guidance on major life decisions, including, per the Times, “whom to date or marry, where to live, whether to take a job or buy a home, and how to raise children.” And these advisers used to be called “heads” when they were men and “handmaids” when they were women. They have since been renamed “leaders.”

The second coincidence is that when Margaret Atwood explained her Handmaid’s Tale inspirations to the New York Times in 1987, she described one of them as “a Catholic charismatic spinoff sect, which calls the women handmaids.” Atwood did not at the time name the sect, so when her quote resurfaced in 2020, it was very easy for some readers to think, Well, People of Praise is a Catholic charismatic spinoff sect that calls the women handmaids, so there you go. Accordingly, on September 21, Newsweek reported that People of Praise was one of Atwood’s inspirations for The Handmaid’s Tale.

Asked about her inspiration for The Handmaid’s Tale by Politico as the controversy heated up, Atwood said she wasn’t sure which group she was talking about in 1987. Her archive of work and research is at the University of Toronto, where she can’t currently access it due to Covid-19 restrictions. But she’s on the record as going through her Handmaid’s Tale archives for journalists plenty of times in the past, and during those interviews, she’s always cited People of Hope, a different Catholic charismatic spinoff that calls women handmaids.

Specifically, People of Hope is a fundamentalist group in New Jersey that some former members have said behaves like a cult and which has allegedly arranged marriages between teenagers. The People of Hope call wives “handmaids,” and when Atwood saw that word in an Associated Press clipping about the group, she underlined it in pen. It’s rumored that it’s here that she developed the idea of using the name to begin with.

In a weird wrinkle, the timing of the lore here doesn’t quite work out. Reporting for the Star-Ledger in 2017d, Tom Deignan found that stories about People of Hope until after , Tom Deignan found that the story didn’t hit the AP until after The Handmaid’s Tale came out in 1985, meaning that Atwood can’t have pulled the word “handmaid” from that mythical news article after all. But regardless, the AP clipping in Atwood’s archives, the one that she always shows reporters, is about People of Hope. And while it’s plenty plausible that Atwood has indulged in a little self-mythologizing about her creative process over the years, it’s not really that relevant to any questions about Amy Coney Barrett and her religious leanings today.

The slippage between People of Praise handmaids, People of Hope handmaids, and Margaret Atwood handmaids is where this whole misunderstanding originated. And it is in its own way telling about the world Atwood was writing about in 1984 when she built Gilead, her theocratic dystopia.

Atwood was drawing from the cultural norms of lots of different North American charismatic Christian groups at the time, including harmless ones. The reason there’s so much confusion about exactly where she took the word handmaid from is that handmaid is the kind of word a lot of North American charismatic Christian groups were into in 1984: suggestive of purity, duty, and feminine obedience to divine will.

Again, that does not mean these groups were practicing sexual slavery. It means they were working with a very specific vocabulary, and the way Atwood made her dystopia feel real was by skillfully mimicking them.

But that this slippage occurred in 2020 is also telling about how immensely fearful people are, on both the right and the left, about America’s future — and how powerful The Handmaid’s Tale is as a symbol of what that future might look like.

People on the left look at Amy Coney Barrett and see someone who has denounced both abortion and marriage equality in explicitly religious terms, someone who they fear will, if placed on the Supreme Court, turn back the clock on both those issues. They see a symbol of the same fear that drove protesters to don Handmaid robes at the Kavanaugh hearings in 2018: the fear that women are going to lose control of their bodies, and that when that day comes, we might as well just be in Gilead. So they have linked Barrett to The Handmaid’s Tale because The Handmaid’s Tale is now our culture’s most potent symbol for the idea of a world in which women’s bodies are not their own.

People on the religious right, meanwhile, see the left’s focus on Barrett’s Catholicism as confirmation that American Christianity is losing its cultural power, and that they may soon become a persecuted minority. Articles that mistakenly link Barrett’s People of Praise to The Handmaid’s Tale, seen through this lens, become examples of the left trying to make Barrett’s religion a disqualifying mark against her, and by extension to make all Christian faith disqualifying for higher office.

The result is a controversy about two political parties that increasingly see themselves as pushed to the breaking point — and who believe they have no space left to interact with the other side in good faith.