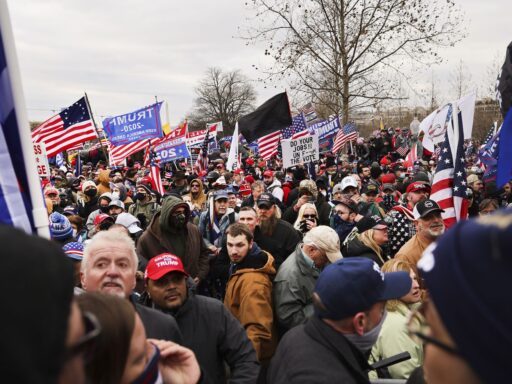 Earlier Wednesday, thousands of participants of a “Save America” rally marched from the park near the White House to the Capitol steps and stormed the building. Animated by the false belief that the election had been stolen from President Donald Trump and encouraged by the man himself — as well as a host of Republicans, including Sens. Josh Hawley and Ted Cruz, who were leading the effort to oppose the Electoral College count meant to have gone on today — protesters entered the building.

They broke windows, physically attacked police officers, and ultimately stalled the business of the day: acknowledging the reality of President-elect Joe Biden’s victory.

Conspiracies about the whole exhibition being a false-flag operation — an act committed with the intent to disguise the perpetrator and cast blame on someone else — run by antifa spread quickly on Twitter and Reddit. But Gosar was the first federally elected official to amplify the baseless conspiracy — and it took only three hours for him to get there.

This has all the hallmarks of Antifa provocation. https://t.co/HJLN3Ijn4K

That evening, his colleague Rep. Mo Brooks (R-AL) told Lou Dobbs that while there could have been “some” Trump supporters, it also “could be any other number of groups, anarchists or what have you.”

A lot is still unknown about the insurrection. But at present, there is no evidence that there are members of antifa who were a part of this crowd. However, there is ample evidence that prominent Trump supporters and members of QAnon were present during the illegal takeover of the building.

Rick Saccone, a Pennsylvania Republican who was defeated by Democratic Rep. Conor Lamb, posted a photo of himself on Facebook with the caption, “We are storming the capitol. Our vanguard has broken thru the barricades. We will save this nation. Are u with me?” Additionally, the Arizona Republic reported that Jake Angeli, a prominent local QAnon supporter who has been “a fixture at Arizona right-wing political rallies,” was pictured prominently among the violent protesters.

Moreover, as BuzzFeed News reported, Trump supporters had been “openly planning for weeks on both mainstream social media and the pro-Trump internet” to riot in DC. One message, which BuzzFeed reports was upvoted more than 500 times, simply read “Storm the Capitol.”

This attempt to scapegoat antifa is, on one hand, absurd. The entire sordid affair was livestreamed, photographed, and televised; the protesters themselves tweeted and about it. On the other hand, it’s a page right out of the Trump playbook.

Trump and antifa, a hate story

As Vox’s Zach Beauchamp has reported, antifa is a “loose ideological label for a subset of left-wing radicals who believe in using street-level force to prevent the rise of what they see as fascist movements.” Trump has elevated them as a foil to right-wing violent actors like the Proud Boys, repeatedly claiming that there are bad actors on “both sides” of conflicts or using them to deflect blame when criticism falls on the most extreme members of his base.

Just yesterday, Trump tweeted that “Antifa is a Terrorist Organization, stay out of Washington. Law enforcement is watching you closely,” even as reports indicated that the pro-Trump protesters could become violent.

When pro-Trump drivers attempted to run a Biden campaign bus off the road on November 1, Trump tweeted “in my opinion these patriots did nothing wrong” and instructed the FBI and Department of Justice to investigate antifa instead.

In my opinion, these patriots did nothing wrong. Instead, the FBI & Justice should be investigating the terrorists, anarchists, and agitators of ANTIFA, who run around burning down our Democrat run cities and hurting our people! https://t.co/of6Lna3HMU

During the first presidential debate against Biden, Fox News moderator Chris Wallace asked Trump to condemn white supremacists. Instead of doing so, he told white supremacists to “stand back and stand by,” and then quickly pivoted to saying, “But I would say almost everything I see is from the left wing, not from the right wing.”

It’s impossible to disprove a false-flag operation, and it’s the simplest way to give your supporters an excuse to continue supporting you. If the violent acts are committed by imposters, then you don’t have to feel bad about supporting your team. In fact, it even justifies radical actions by your own team if they’re responding to radical behavior by the opposing side.

Trump has perfected this over and over again — and it’s likely this conspiracy will gain traction among some segments of his base. But it could be a harder sell when prominent Republicans and right-wingers are on camera obviously committing crimes in broad daylight — just minutes after Trump was onstage telling the soon-to-be-violent crowd that the election had been stolen from them.