The fastest way to get more people to buy electric vehicles 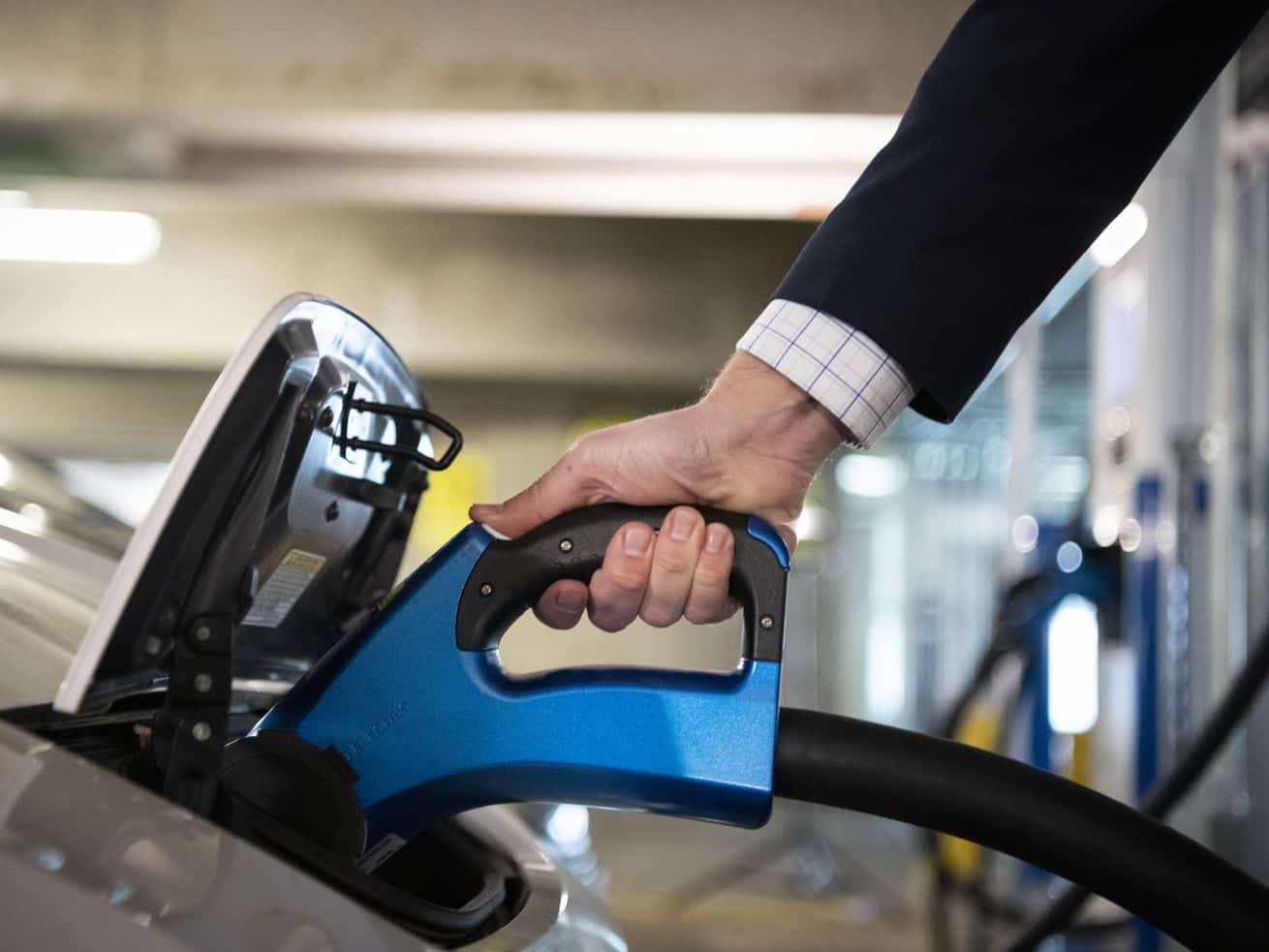 Whether the United States can get to net-zero emissions by 2050 hinges hugely on our love of cars: They’re the dominant mode of transportation in America — ridership on trains, buses, and other public transit pales in comparison.

Other transportation options are limited, and cars are ingrained in American culture. This makes switching to electric vehicles an attractive way to decarbonize. But in order to encourage more people to buy electric vehicles (EVs), the US needs a better charging station infrastructure.

That is a key part of President Joe Biden’s American Jobs Plan, which proposes spending $174 billion on EVs, a sum that would boost supply chains for automakers, help subsidize the cost of cars for American drivers, and dramatically scale up the number of public electric vehicle charging stations along the nation’s roadways.

Biden’s plan would increase the number of charging stations more than tenfold by establishing grant and incentive programs for state and local governments and private companies to build 500,000 charging stations around America’s highways and in hard-to-reach communities by the year 2030. With a number of US carmakers pledging to go totally electric by 2035, that buildout could make EV charging ports as ubiquitous as gas pumps.

At the moment, there aren’t enough reliable charging stations to accommodate a sudden increase in EV usage. About 627,000 plug-in EVs were bought in 2019 and 2020, and demand is expected to increase — especially as carmakers phase out gas-powered cars.

“We’re so much better off than we were even five years ago … but we still have a huge gap,” a Biden administration official told Vox. “This is an essential piece of the shift to EVs and it’s not going to happen on its own.”

Transitioning American car drivers to electric vehicles is a crucial piece of the Biden administration’s overall plan to get the United States on a path to net-zero emissions by 2050, as well as its more immediate goal of limiting catastrophic climate change by cutting greenhouse gas emissions by 50 to 52 percent relative to 2005 levels by 2030.

Getting EV charging stations to be as ubiquitous as gas stations would help change that, but it’s just one piece of the puzzle. Even more important is increasing the availability and access for home and work charging stations — where experts believe most people will ultimately charge their cars.

“Home charging is the most important; that’s where the highest number of charging [stations] will be needed,” said Scott Hardman, a researcher studying hybrids and EVs at the University of California Davis Institute of Transportation Studies. “It’s the cheapest; it’s the most convenient.”

In addition to building public charging stations, the Biden administration plans to propose expanding tax credits for private infrastructure for home EV chargers, giving people an incentive to install them. This is key, experts told me; making charging station access equitable — ensuring they are affordable and accessible — is as important as increasing the total number of charging stations.

Both are doable but will take serious government investment. But as with the rest of Biden’s agenda, the fate of this proposed network of charging stations could hinge on the fate of bipartisan infrastructure negotiations and whether the president decides to pass his plan with only Democratic votes.

A charging station is not the same as a gas station

Because gas stations are the most common method of refueling cars in the United States, powering up electric vehicles might call to mind clusters of charging stations next to convenience stores next to a highway or road.

But the two modes of powering up are fundamentally different. For one thing, driving into a gas station, filling up, and driving out typically takes just a few minutes.

The fastest EV charging stations — like DC Fast — on the other hand, take up to 20 minutes to charge enough to power the vehicle to a 60- to 80-mile range. Some state and city planners and EV experts are working on putting charging stations outside of restaurants, grocery stores, and shops, so that people can go off and eat a meal or shop while their car is refueling.

“Most charging, we would hope and expect, is happening while people are doing something else,” said Eric Wood, a research engineer at the National Renewable Energy Laboratory’s Center for Integrated Mobility Sciences. “The idea that charging is happening slowly can be convenient for the driver as well as the grid.”

More rapid charging technology is being developed, but the vast majority of available public charging stations currently in the US are the more sluggish Level 2 chargers, which require far more time to get to a full charge. There are just 5,141 DC Fast chargers in the US, with big gaps in parts of the Midwest and Mountain West, according to the Energy Department’s map of charging stations.

“If your battery’s down to 20 percent, you’re going to have to stay plugged in for hours and hours,” said Ellen Hughes-Cromwick, the former chief global economist at Ford Motor Company, now a senior resident fellow at Third Way.

The lack of charging infrastructure can mean headaches for drivers going on road trips, who need to plan their route to hit available charging stations. An October 2020 poll from YouGov found that charging time, hassle of charging, and cost of charging at home were all top reasons buyers who were looking for a new car weren’t considering an electric vehicle.

As climate expert and activist Bill McKibben recently found while on a road trip from Vermont to Boston, if you’re in need of some juice and another driver is already using a public charger, you could be in for a nerve-wracking drive home.

“The plug was in use once more, so I swallowed hard, did a little math, and drove on, arriving home with red lights flashing on the dashboard and a display indicating that my range was down to two miles,” McKibben recently wrote in the New Yorker.

Competition and congestion around EV charging stations has gotten particularly bad in cities like San Francisco, where there’s a growing number of electric car drivers. (The places with the highest density of charging stations per 100,000 people are Vermont, California, Colorado, Hawaii, and Washington, DC.)

“In San Francisco, there’s a huge congestion problem, and there are simply not enough plugs for EVs in that metro area,” said Hughes-Cromwick. “There is congestion in areas where EV demand has flourished. If we don’t get going on this, we will have roadblocks, especially for longer trips.”

Another complication is that some electric car companies like Tesla — frustrated at the lack of investment in EV charging stations — have built out their own networks of superchargers that are only compatible with their cars. So if a driver of a Chevy Bolt or Nissan Leaf is running low on battery and the only charger around is a Tesla, they’re out of luck.

The White House official I spoke to told me that any federal investment in EV charging stations will require universal chargers that can work with the full range of electric vehicles on the market.

“It’s been incredibly important for Tesla to have done that buildout, but we’re thinking about this investment as chargers that can support any vehicle,” the official said. “It’s very clear it needs to be accessible for any driver of an EV.”

That accessibility — along with the sheer number the White House hopes will be built — ought to, in theory, eliminate lines and congestion around chargers, while also ensuring charging is affordable. One thing it won’t do is solve the problem of charging times, but charging companies are developing faster chargers, and the second part of the White House’s proposal hopes to address that issue as well.

The most common and easiest way to charge an electric car doesn’t necessarily happen alongside a roadway; an at-home charging station “ends up for a lot of Americans being the only place they’d need to charge on a regular basis,” said Wood.

Home charging is especially convenient for people who primarily use their electric car for short trips around their town or city; especially if a car has a 200- to 300-mile range, that could get them a couple of days or weeks on a single charge. This is important because Americans do the vast majority of their driving for short trips: Nearly 77 percent of vehicles drove distances of 10 miles or less per trip, according to the 2017 National Household Travel Survey (the most recent available). In other words, it’s far more often that we’re driving home, to work, or to run an errand than going on a long road trip.

Home charging may be the most convenient, but home charging is also typically relegated to higher-income people who can actually afford to charge from within their home. For lower-income people who don’t have a garage or a dedicated parking spot with easy access to a charger, the logistics of charging at home become much more complicated.

Just as policymakers are figuring out how to make EVs cheaper, experts told me that any expansion of charging stations needs to focus on how to make home charging more equitable and accessible for middle- and lower-income people.

One option is getting more charging stations on residential streets, powered by the same electrical lines for street lights. This was piloted in London in 2020, with a number of street lights converted. But this is a relatively small project, and it hasn’t been adopted widely yet in other countries. Another option is increasing the number of charging stations at people’s workplaces, giving them another place to charge while their car is parked for hours.

“Everyone parks their car somewhere at night; that’s where we need to get the charging to,” said Hardman. “We have to be careful it’s not just the privileged households that get the lower running costs.”

The Biden administration official told Vox that the president’s infrastructure plan is proposing an extended or expanded tax credit to expand private infrastructure like charging stations at home.

“There’s an outsize public role for that infrastructure,” the official said. “You have to have a mix of home charging, workplace, and public.”

Overall, Biden’s goal is to make EVs more attractive in large part by making charging more convenient. But it will take significant government investment for Biden’s desired 500,000-EV network to become a reality.

Getting a bipartisan group of lawmakers — particularly in the Senate, where Democrats need 10 Republican votes to pass legislation under normal rules — to agree to spend nearly $200 billion on EVs won’t be easy, as prolonged infrastructure negotiations have shown. But the US will need to make this change in order to meet its climate commitments, and to decrease its contribution to climate change.

The Other Lamb is chilling, vengeful horror about coming of age in a cult
We wiped out the flu this year. Could we do it again?
The EPA appears to be using coronavirus to make huge concessions to polluters
Sondland says he told Pence about Trump and Ukraine. Pence says that “never happened.”
Now you can get Beyond Meat and Impossible Burgers delivered right to your door
Today, Explained: Greatest Hits