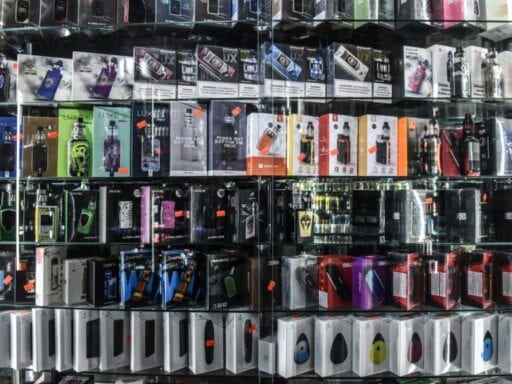 Share
Loading...
Vaping and e-cigarette products are displayed in a store on December 19, 2019 in New York City. Congress passed a bill that raised the legal age to smoke or vape to 21 as of December 20 — the same day it was signed into law by President Trump. | Stephanie Keith/Getty Images

The move could save thousands of lives.

The US Food and Drug Administration has officially raised the minimum age to buy tobacco products like cigarettes, electronic cigarettes, and vaping products that contain nicotine from 18 to 21.

After President Donald Trump signed the new age limit into law on December 20 as part of a larger government funding bill, the federal agency also released its updated rules around the sale of tobacco and vaping products — expressly prohibiting their sale to anyone under the age of 21 — the same day.

“On December 20, 2019, the President signed legislation to amend the Federal Food, Drug, and Cosmetic Act, and raise the federal minimum age of sale of tobacco products from 18 to 21 years,” a statement on the FDA’s website says. “It is now illegal for a retailer to sell any tobacco product — including cigarettes, cigars and e-cigarettes — to anyone under 21.”

The change comes after a months-long, bipartisan process led by Senate Majority Leader Mitch McConnell (R-KY) and Sen. Tim Kaine (D-VA), who worked together to change the age requirement. McConnell used his clout to make sure the updated language was added to a massive $1.4 trillion end-of-year spending bill to fund the federal government. McConnell, who is up for reelection next year, made clear he wanted to pass a bipartisan bill to curb smoking and vaping among youth in his state.

“Kentucky continues to punch above its weight in Washington as I use my position as Majority Leader to advance Kentucky priorities, such as my bipartisan bill with Senator Tim Kaine, to stem the tide of early nicotine addiction among youth in Kentucky and across the nation,” McConnell said in a statement after Trump signed the bill into law.

And as The Verge’s Adi Robertson explained earlier this month, a few major tobacco companies supported the legislation — partly as a ploy to forestall other regulations:

Dominant e-cigarette maker Juul has backed these new restrictions at both state and federal levels. (Tobacco giant and Juul investor Altria also supports the move.) Raising the buying age could take regulatory pressure off tobacco companies in other areas, like flavored e-cigarettes, which have been banned in three states and several municipalities, including New York City as of this week.

Implementing the change may involve other steps — the FDA announced it will be issuing additional information as it becomes available; it recently issued new draft guidance for cigarette packaging and advertising, which the agency is currently accepting public comment on — but it’s one that’s already been adopted by over a dozen states nationwide.

Raising the age to buy tobacco nationwide will likely save lives

Now that this is a federal law, all states will have to comply. As Vox’s German Lopez has written, the change could save thousands of lives. A body of research shows it’s important to try to prevent teens from smoking or vaping nicotine products, because they are the most likely to become addicted.

A 2015 report from the Institute of Medicine (IOM) found raising the smoking age to 21 could prevent approximately 223,000 premature deaths among Americans born between 2000 and 2019.

Richard Bonnie, a University of Virginia professor of health and law who headed the analysis, previously told me that delaying when people start smoking is crucial because older people — perhaps more aware of their mortality and the health effects of tobacco — are less likely to initiate smoking. About 90 percent of adults who become daily smokers report first using cigarettes before 19 years of age, and almost 100 percent report first use before 26, according to the IOM report. So preventing people from starting to smoke at a young age could very well stop them from smoking for a lifetime.

The new law also comes at a time when public health professionals are alarmed at the rise of e-cigarettes and vaping among teens. Cigarette use among this group had been steadily falling for years, but that trend has reversed itself since the introduction of vaping products that contain nicotine.

According to the survey findings, 28 percent of high school students reported using nicotine e-cigarettes in the past 30 days this year — up from just over 20 percent in 2018. Among middle schoolers, that rate rose from 5 percent in 2018 to 11 percent in 2019. The figures are “particularly concerning given relatively high exposure to nicotine through the use of nicotine salt–based e-cigarette products such as Juul,” the researchers wrote, “which was the most commonly reported brand among youth using e-cigarettes in 2019.”

By raising the age to buy cigarettes and vaping products, lawmakers are attempting to avert another public health crisis.